Ask Question
Asked 9 years, 2 months ago
Modified 9 years, 2 months ago
Viewed 1k times
0
\$\begingroup\$
It's difficult to tell what is being asked here. This question is ambiguous, vague, incomplete, overly broad, or rhetorical and cannot be reasonably answered in its current form. For help clarifying this question so that it can be reopened, visit the help center.
Closed 9 years ago.

I have a problem with the MOSFET commutation. The fall time is very slow when the load resistor has a low value. It seems like there's a capacitor. However, this doesn't happen when I use a BJT transistor instead of a MOSFET.

I've tried with lots of MOSFETs but the result is the same. I read this may occur because of the scope probe although I'm not sure how. Can anyone help me?

Some general points, since the question is somewhat vague:

In order to get good switching speed with a MOSFET, you need to actively drive the gate, and actively discharge the gate. This can be accomplished with a discrete two transistor totem-pole gate driver, or (more commonly these days) with monolithic gate driver ICs that have amps of instantaneous sink/source capability.

One thing that some people don't consider is the internal gate resistance of the MOSFET, which manifests itself in series with the interal gate-to-source and gate-to-drain capacitances. Consider this simplified model (courtesy Vishay): 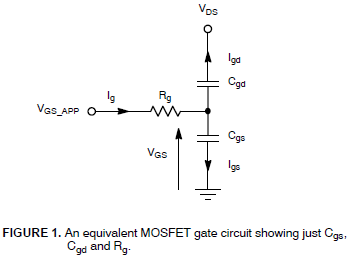 \$R_g\$ is one of the main reasons you need a stiff driver, since it limits the current available to charge and discharge \$C_{gs}\$. (\$C_{gs}\$ itself is another reason.)

\$C_{gd}\$ is also known as the 'Miller' capacitance, is quite nonlinear and also plays a role in gate turn-on and turn-off, since the gate needs to overcome both of these capacitances to get the device solidly 'on'. 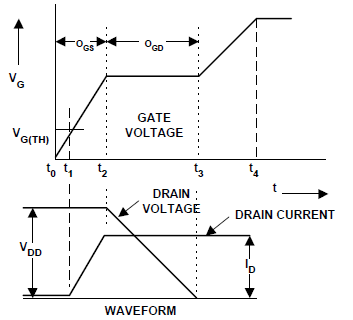 Another area that can cause slower than necessary turn-off (with N-channel MOSFETs) is if the applied gate voltage is much higher than the voltage required to turn the device on. If you have a logic-level MOSFET and need only 5V to fully enhance the channel, and apply 12V to the gate, that extra 7 volts doesn't get you much except extra \$C_{gs}\$ charge to remove when you're trying to turn the device off. If you're using a gate driver that can sink or source amps of current, this extra voltage isn't really a concern. If you're passively discharging the gate, it can significantly affect the commutation time.

44
Why would an op-amp use BJTs over MOSFETs?
4
How to Power a Tank Circuit with Mosfet without the Inductor Undesireably Triggering the Mosfet
5
Induction heater circuit problem
1
Mosfet contradiction?
2
Is it normal to have this long fall time with a MOSFET and a LED strip at 100Hz?
3
BJT vs MOSFET switching speed