Reactance / Inductance / Impedance of a 1:1 Transformer

I've searched around and poored through what references I have available, and haven't been able to find an answer to this question.

Regarding 1:1 transformers, I found a website where an audio amplifier electronics guy mentioned that it doesn't seem too much to matter how many winds you put on a 1:1 transformer so long as the reactance/impedance is at least about 4x the circuit impedance. He said "about" as if there was no magic way he calculated it -- it was simply based on his experience building and fixing amplifiers and transformers. I was wondering if someone shed some light on this issue.

I'm most interested in a full-load transformer. Here's a circuit showing an inductor and resistor in series with the transformer. 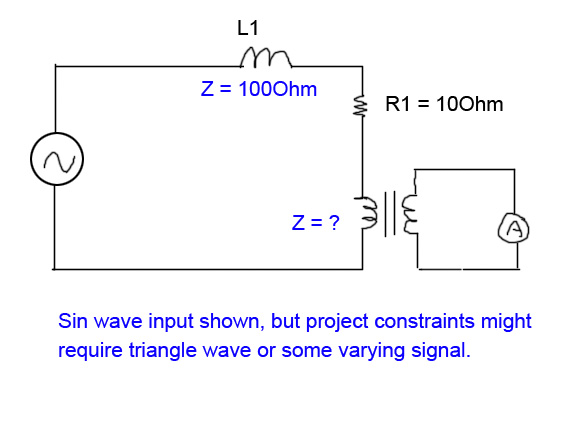 What is a practical Z for the primary coil of the transformer to make sure it works properly? And what kinds of problems will arise if my Z is way too low?

So for the sake of total extremes. Assume I only had 100 Volts and 0.9amps in the primary circuit, limited mainly by the resistance and impedance of R1 and L1 Let's assume the resistance of the transformer is minor for simplicity. What is going to happen in the secondary circuit if my impedance on the transformer primary is near zero? Will I just get no power at all in the secondary? Will I get some current with very small voltage?

And what will happen if the reactance of the transformer primary is 100Ohm making it very similar to the L1?

EDIT: I should clarify that by "full-load" transformer, I'm meaning the condition that the transformer secondary is dead-shorted. The diagram is showing an amp-meter (A) between the leads.

You should possibly consider looking at the transformer in two ways; one without a load and one with a load on the secondary.

Without a load on the secondary, the transformer is just an inductor and if you have components (such as L1 and R1) in series with the primary, the voltage developed on the primary will not be the full AC amount from your generator. It's a simple case of calculating the impedances and volt-drops. This is with the secondary unconnected remember.

The primary has inductance like any other coil but, for a transformer to more effective, it is desirable for the primary's self inductance to be high in power applications. If you looked at how much current flowed into the primary (secondary open circuit) you would find that the current was small compared to when driving a load on the secondary and it may have an inductance of several henries.

It's a different matter when there is a load on the secondary. If the turns ratio is 1:1 and you have 100 ohms on the secondary, it is reasonable to argue that the impedance presented to the primary circuit is also 100 ohms. This assumes power out is close to power in. In fact the impedance relationship between primary and secondary is related to turns ratio squared. For instance if it is a 10:1 step-down transformer with a load of 100 ohms, the equivalent impedance at the primary is 10k ohms i.e. 10 x 10 x 100.

In summary, for a power transformer, you'd like the primary inductance to be infinite but that is impractical so you live with something that doesn't take too much current when the secondary is open circuit. The off-load current that flows is real current taken from the AC power and if everyone had low-impedance transformers the electricity companies would be supplying a load of current that doesn't get them revenue. This is a slight exaggeration but not far off the truth. On industrial sites power factor correction is used to minimize this effect but that's a whole new story!

And if your transformer primary was 100 ohm impedance you'd be seeing something less than half your AC voltage applied. If R1 was zero then you'd see exactly half.

As regards saturation I've shown the equivalent circuit of a transformer below. Note that saturation is caused by the current flowing through the magnetizing inductor which is nothing to do with load current: - 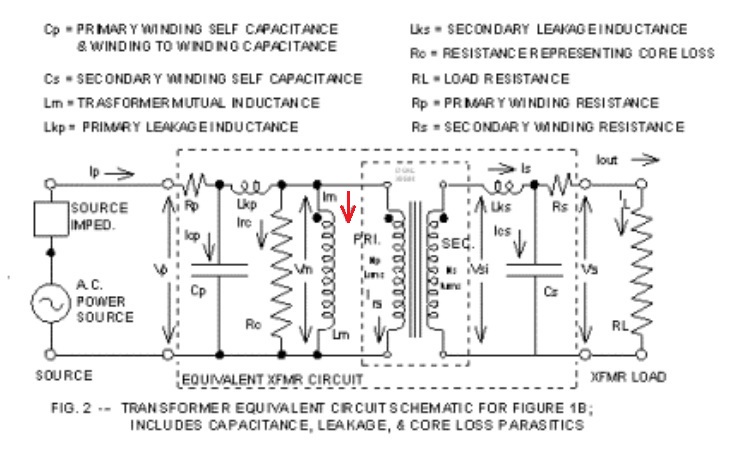 Here is a good document from Elliott Sound Products and please note what it says about maximum flux density therefore saturation:

Why doesn't the core saturate more under load conditions? Imagine two coils sharing the same magnetic core. Ignore magnetization currents and losses. The primary is 100 turns and the secondary is 10 turns. If the secondary load current is 10A, the primary current must be 1A and the ampere-turns is therefore the same on both coils. Are these ampere-turns additive or subtractive? They are subtractive and this can easily be seen with dot notation.... 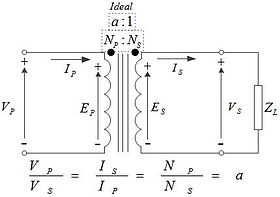 Because the dots are at the top on both coils, they are wound in the same direction and the currents are flowing in (primary) and out (secondary) therefore due to the RH rule the fluxes (due to ampere-turns) are cancelled.

Now all that is assuming the transformer core isn't saturated. Transformers aren't designed to run on a dead short since that would attempt to draw maximum current from the power supply which effectively creates a huge amount of magnetism in the core. That extra flux starts to leak out and so the result is that the only power actually drawn and transferred is related primarily to the saturation flux of the core.

1
Why is maximum flux attained in transformer when off load?