Why one of my multimeter shows a small voltage when only one probe is connected to AC and the other dont?

I've recently acquired a Minipa ET-997 multimeter. I noticed that when I connected one probe to 127V phase and let the other disconnected, it will show around 12V.

But I have an older and cheaper multimeter which shows 0V in this same situation. Why is that?

What you are seeing is a result of capacitive coupling and the very high input impedance of the multimeter. This is the same effect that causes hum in a audio line when you touch it with your finger. You're body isn't directly connected to the power line, but it picks up enough, which is then fed into the audio lead, so that it is quite audible after the amplifier makes it larger.

Your multimeter is like the amplifier, except that it displays the value instead of driving a speaker with it. There is enough difference in what is coupled to the two inputs of the meter with a wire dangling from one and none from the other such that the difference is measureable.

In short, this is all expected, and actually shows you have a good meter.

What Olin said, but also you have capacitive coupling because any two conductors not touching is a capacitor. (It's no coincidence that the schematic symbol looks like two non-touching conductors). The capacitance gets bigger as the conductors get closer, but the house wiring and your unconnected meter probe are still a (small) capacitor. So when you don't have one a lead connected, you have this: 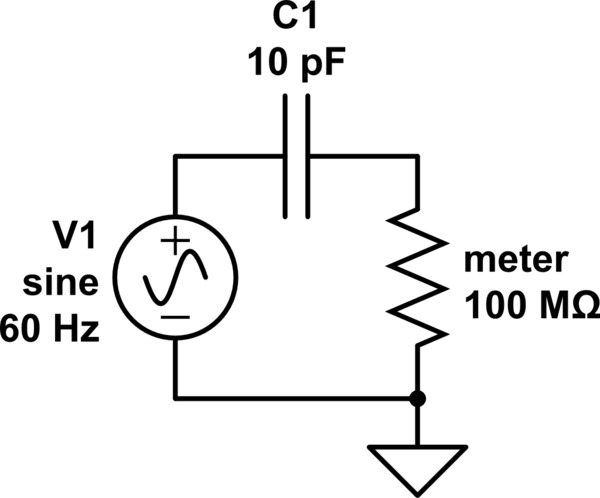 The larger the capacitor, and the larger the meter impedance (represented by the very large resistor), the higher voltage you will measure.

(the ground, by the way, is just there so the simulator can give you numbers relative to something. It's not meant to imply that the meter, or the AC supply is actually earthed, and is not relevant to the operation of the circuit at all.)

3
What's the low voltage displayed by a voltmeter when only one of its probes is connected?
0
Why does the measured potential-difference between two poles of an AA fizzle out after 5 seconds?
0
Multimeter, outlet and a Spark: the question of simple Voltage measurement
15
Why doesn't my multimeter show the correct Zener reverse voltage?
0
Why does the value increase constantly and slowly in diode mode?
5
Testing UK carbon monoxide power socket is live