I am looking for information on how much time it takes for a typical LED to shut off long enough that the light can no longer be detected by human eye.

With that, I would argue that about 8 mS is well past the limit of what humans can detect.

Now LED's, any LED except the white ones that use phosphors to make the white light, will be much faster than 8 mS. Typically an LED turn on/off time will be 1000 times faster! Some are even 1,000,000 times faster.

So there you go. While these numbers are approximate, they should be good enough for your application.

Let's define a "typical LED" as LTL-307EE. The brightness is a function of the current in the LED. From the datasheet: 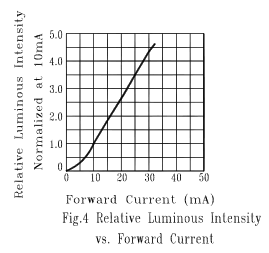 So the question is then this: how quickly can you reduce the current in the LED? The datasheet says the capacitance of this LED is \$20pF\$; that will be half of what defines how fast you can change the current. The other half is your driving circuit, which will have some resistance, and some inductance, which serve to limit the current the LED driver can deliver, and thus the rate at which you can turn it on or off.

Since we don't know anything about your driver, let's assume that it has a source impedance of \$100 \Omega\$. This isn't hard at all, and you could do better if you designed carefully. The time constant of this circuit is then:

So every 1ns, the current increases or decreases by about 63%.

We can go on to consider how many time constants would have to pass for the current to decay to some threshold considered to be "off", or fret about the non-linear relationship between luminous intensity and current, but \$1ns\$ is a really short time. Nerve impulses take orders of magnitude longer to travel, and persistence of vision lasts even longer. So the question to ask is really this:

How long does it take a human to perceive that a light has been turned off?

Since that's a question about biology, not electronics, I'll leave it at that.

5
Shortest time to visibly light LED
3
Does a 1 watt 660nm LED put out more radiant flux than a 1 watt 630nm LED?
0
BJT driven LED lengthy fall time
8
Minimum energy required for LED blink to be visible
4
How Is Intensity of Blue Light Measured?
1
regular wall switch on off led dimmer
0
How do I shine an LED when a PIR detects movement but keep it shining until a reset button is pressed?
2
led chaser with non-mechanical shut-off option
1
How to fully shut off an LED indicator when used with a Smart Switch?
0
Effect of changing PWM frequency of a light source on perceived brightness