Why is maximum flux attained in transformer when off load?

Can anyone explain to me why the maximum flux in a transformer is attained when off load?

What happens to the flux when on load? Are the flux from the secondary load current and primary load current just leaking out into space? Or are the magnetic particles somehow being canceled or destroyed? Does anyone have an answer instead of just pointing at conditional math equations that don't explain anything?

Another user claimed the load current flux somehow cancels the primary current flux, but this is inadequate as "canceling" doesn't explain what's happening. Two opposing fluxes should both contribute to a lowered permeability of material. If they don't, then why is this? One would have to conclude that the particles or virtual particles (whatever a magnetic field consists of) are literally being transformed/destroyed/significantly altered or something drastic.

The simplest conclusion is that the vast majority of flux generated while a transformer is loaded should be leaking out into space around the core. But I haven't heard anyone say this. I've certainly never run the experiment myself. Does anyone know if the magnetic field around the outside of a core goes sky high when you put it on load?

Look at the following scenarios and then it should be clearer why maximum transformer flux happens when off-load: - 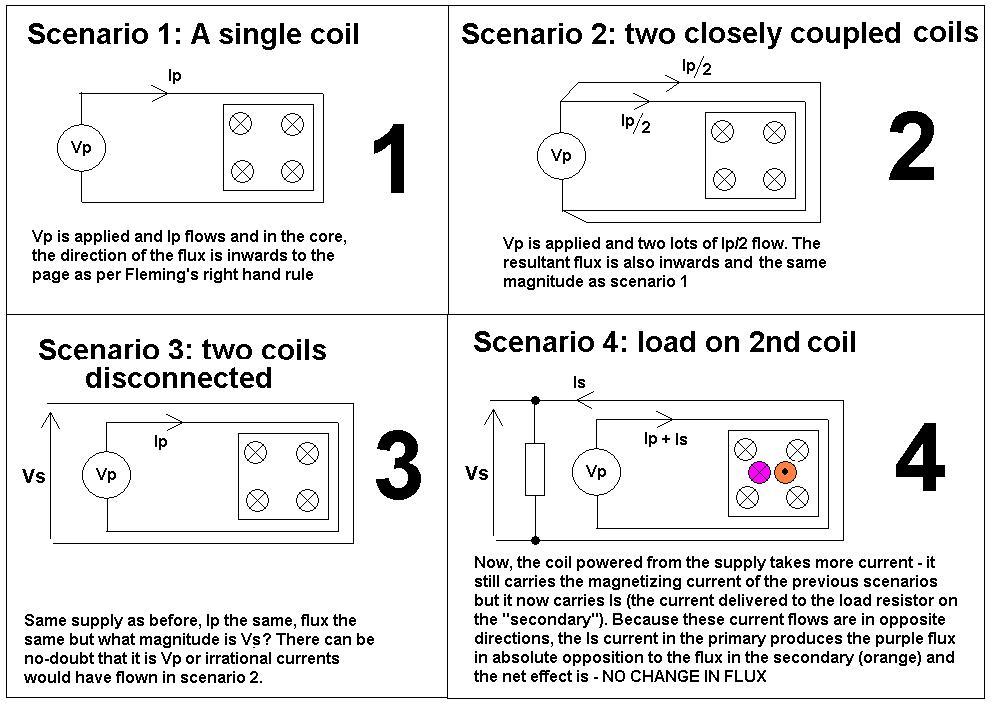 The above are perfect idealizations of inductors and transformers. And if you are having problems with any of the steps then maybe someone else can do this question some justice.

The permeability of the material (when not close to saturating) is determined by the physical properties of the material and not the opposing fluxes in primary and secondary due to load current.

The vast majority of flux does not leak into space around the core - it is contained within the core and cancels out to zero for load-currents leaving what was originally there - the magnetizing flux.

When a turns ratio is applied ampere-turns from primary might be 1 x 10 whereas on the secondary (for 10:1 turns ratio) they will be 10 x 1 - ampere-turns drive flux and these cancel out just the same as a 1:1 transformer.

Here is the link to the question posed by Jim related to this one.

Bar magnets This is not the same in bar magnets held N-N and S-S. In Bar magnets (held steady wrt each other) there is no induction and therefore only a force exists and I think this is to do with Newtons 3rd Law?

Twisted pair cable Also think about twisted pair cable - there is no net flux emanating beyond a small distance. of course there are very local fluxes around each wire but these cancel at a very short distance.

The flux in a transformer is maximum at no load because only a small amount of current is drawn by the primary at the no-load condition. As the load (secondary) current increases, the primary tries to draw a proportional amount of current to counter the demagnetizing effect of secondary current. However, the primary current doesn't really exactly cancel out the effect of secondary and hence the resultant flux is a slightly lower value.

Why can primary not cancel the effect of secondary totally? It is because if the primary current has to increase, it has to be at the expense of induced emf (E) since they are related as I=(V-E)/Z. (Note that V, the voltage applied at primary is constant). Hence E and correspondingly the flux settle for a new (lower) value such that more current can be drawn and a stable equilibrium is achieved.

Share
answered May 22 '18 at 5:21
user172541user172541
\$\endgroup\$
Add a comment  |
Highly active question. Earn 10 reputation (not counting the association bonus) in order to answer this question. The reputation requirement helps protect this question from spam and non-answer activity.

Not the answer you're looking for? Browse other questions tagged transformer electromagnetism or ask your own question.

4
Reactance / Inductance / Impedance of a 1:1 Transformer

3
Four transistor/full bridge version of the Royer oscillator
2
How does flux exist in a transformer?
2
Induced voltages and flux within a transformer and their polarities
0
Lenz's law and the magnitude of opposing fields
0
Flux control in transformer
0
Flux Transfer of Current also involved in Autotransformer?
2
Transformer’s Flux and Back-EMF
1
Confusion - ideal transformer on load