How does the Accutron Spaceview work?

I am wondering how the electronic circuit used to drive the tuning fork in the Accutron Spaceview watches worked. The page at The Accutron 214 gives a brief explanation and some diagrams. I am most interested in the later "two wire" circuit:

I am unsure whether the tuning fork has magnets inside the cups or if they are just metal, but I believe they are just metal. It would be nice to verify this somehow. Other than that the driving coils keep the fork in motion with periodic pulses of current and that the feedback coil somehow senses the motion of the fork to control the driving coils through the NPN transitior, I am absolutely clueless as to how the circuit works. Any help would be appreciated!

EDIT: I've been pursuing electronics more seriously recently and have a much better grasp on how circuits like this work now. One of the physics classes I took last year was also fairly illuminating. I have an idea about how this circuit may work and I would like someone to verify this is correct or point out the fallacies. The transistor acts as a common emitter amplifier, the resistor biases the transistor so it is constantly conducting. I am surprised how little current it passes though; judging on transistor specs from the era - it seems the drive coils would have a current of under 10 microamps going through them constantly (I assumed a current gain of 15, since the silicon transistor would have been an improvement over the earlier germanium transistor used in the first design, which I know had a current gain of about 12). Could that be right? It's so little current. As the drive coils appear to be wound in the same direction, that is with the fields they produce both pointing in the same direction, the metal cups of the tuning fork should be attracted together slightly, as the current through the transistor increase so will this attraction. Any signal received by the feedback coil is passed through the capacitor. Due to the direction of the feedback coil's winding, this causes positive feedback; an increase in the number of field lines through the feedback coil will cause a larger current through the drive coils, a decrease causing a smaller current. As the tuning fork reaches one extreme and begins moving back, this changes the magnetic flux through the feedback, which keeps the electrical component of the circuit in phase with the motion of the tuning fork. Positive feedback ensures the system keeps going.

Here you will find a good explanation using a PNP transistor instead of a NPN, but the way it works is the same. In what follows I will describe the general idea.

To understand how the feedback occurs look at the picture below. The red U is the fork (for illustrative purpose). Each leg of the fork has a permanent magnet that interacts with the drive coils and the feedback coils. When it is oscillating around its equilibrium position, the maximum speed will be achieved when the legs are passing through that equilibrium position, like a mass on a spring. It is during maximum speed that the induction will be maximum.

Now suppose that the capacitor is initially discharged, then the voltage from Vdc will bring the base voltage above the emitter voltage and the transistor will turn on. The current that will flow through the drive coils D1 and D2 will be enough to start the oscillations. Meanwhile, the base current will start to charge the capacitor. In steady state the voltage induced in the feedback coil F1 will be turning the transistor on and off, with the capacitor barely discharging during the off cycles (C*R >> 1/(frequency of oscillations ).

Suppose the the fork is going through the point of equilibrium, then it will induce a voltage in F1, with the sign depending on the direction of movement. Only one of those peaks of voltage will turn the transistor on, the one which brings the base voltage above the emitter's. When that happens the current through D1 and D2 will sustain the fork oscillation by creating a magnetic field that 'pushes' the permanent magnets in the fork.

Next, suppose that the oscillations grow larger in amplitude and let's see how the circuit corrects it. First, a higher voltage will be induced in F1, but that shouldn't matter when the transistor is fully on (saturated). On the other hand, a higher voltage will also be induced in D1 and D2 and it will be such that it will tend to oppose the current drawn by the transistor through the collector. The result is that the driving current (collector current) decreases, and that means a smaller magnetic field and consequently a smaller "push" to the fork. Therefore the oscillation amplitude will decrease.

Another way by which the circuit corrects itself is through the capacitor C. If the oscillations get larger then a higher voltage will be induced in F1, but if the transistor is not fully saturated then a higher current will flow through the base in response to the higher voltage in the base with respect to the emitter. That current will charge C during the ON cycle, which will begin to discharge during the OFF cycle through R. So a higher base current means a higher voltage in the capacitor at the end of the ON cycle, which means that it will be harder for the next peak of voltage to overcome that new capacitor voltage and turn on the transistor in the next cycle. Remember the RC constant is relatively big, so the charge time of C is larger than the discharge time.

I think that's all. If you are wondering how a vibrating fork could replace the escapement of a mechanical watch watch this video.

I thought this might be of some use in understanding the way the watch works. 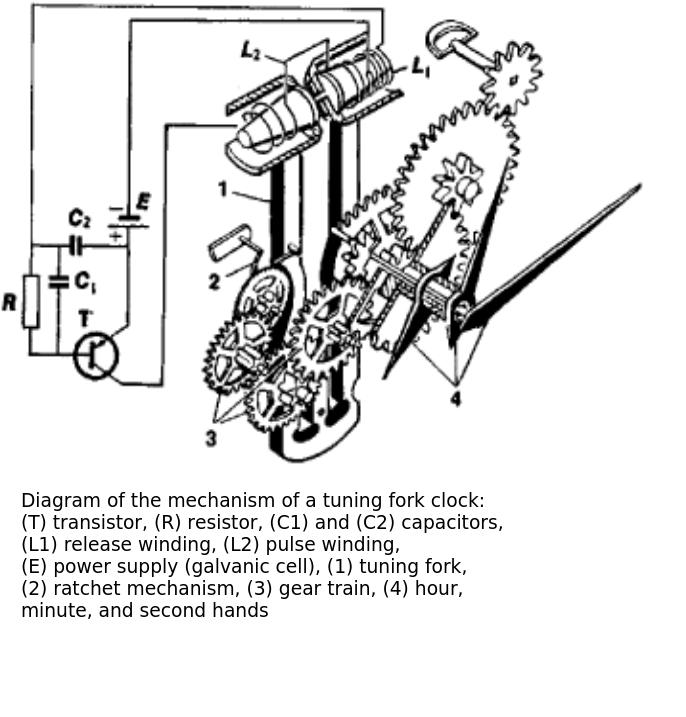 The electronic circuit is similar and performs the same (oscillator) function. The tuning fork is constructed with the coils attached to its ends. When the pulse current passes through the DRIVE coils (marked D on the circuit) the electro-magnets attract causing the tuning fork ends to pull together. The movement of the tuning fork arm indexes the mechanism forward. The feedback coil completes the oscillator circuit causing the transistor to pulse the drive coils. 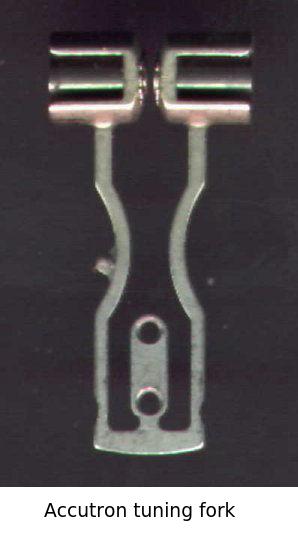 Not the answer you're looking for? Browse other questions tagged oscillator inductor coil or ask your own question.

4
Simulating a magnetic field in Spice
1
How to remove energy from inductor using semiconductors?
6
How does the negative feedback in this oscillator work?
1
Effect of metal on electromagnetic field / Coil performance
1
Will this phototransistor circuit work?
0
Looking for a formula for calculating maximum induced AC voltage in two air coils next to each other
5
How does the magnetic field of an inductor affect the operation of a DC circuit?
0
What's the minimum amount of transistors I need to operate a stepper motor?
0
Protection for transistor driving a coil