Nodal Analysis of a Circuit

I'm trying to apply Nodal Analysis here.I have found that taking reference Nodes and application of Kirchhoff's laws yields some equations and on solving these equations i will get the needed result.But in this question the current sources are not given ,in the online example i just saw there was a current source and 3 equations were formed,in this text book example they have solved it some how,can some one tell me how they have formulated the equations

The sum of all currents must equate to zero.

All they did in your example is the following

[edit] because of comment about choice of direction of current

To add another example 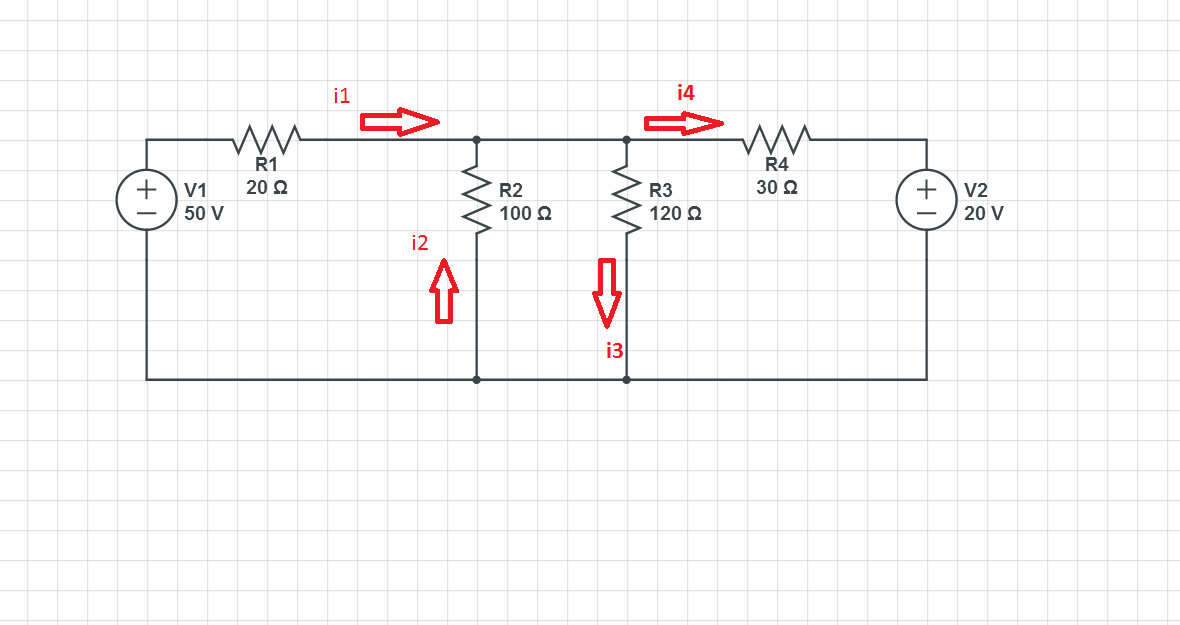 I randomly chose the direction of the currents. It doesn't matter what direction I choose (the math will work itself out) so long as the the sum of currents and exiting the node is zero.

Looking at my example here, I'm going to say that current entering a node is positive, and current leaving the node is negative. It doesn't have to be this way, it can be the opposite if you want, but I chose this convention. With that said, that means

When you plug these into the equation above, you can isolate v and you'll get v= 31.147V.

So it doesn't matter which direction you think current goes, so long as you define the direction first, then write the equation for the node with your chosen direction, it'll work out.

First you must realize that there is only one node you don't know the voltage for. They are calling it v, and it is the node at the top center (the bottom node can be your ground reference).

The voltage for the left and right nodes are given by the voltage sources.

The current for each branch coming into the node is calculated as per ohm's law: current = voltage/resistance. These are all in terms of v, so you simply proceed to solve for it algebraically.

Now that you have the voltage for all the nodes, you can directly calculate the current flowing through any branch you want, which is what they do at the end of the posted image.

Not the answer you're looking for? Browse other questions tagged dc kirchhoffs-laws or ask your own question.

2
Solving this circuit using node analysis
1
Current flow in a series circuit with two voltage sources
2
Using kirchhoff's voltage law with current sources
1
Question about thevenin circuit analysis with voltage across voltage source
1
Application of Kirchoff's Laws to circuit with multiple loops
3
DC analysis of common source MOSFET circuits to find gate voltage using different power supplies
4
How to write the Kirchoff's voltage equations for this complex circuit?
0
How do you write the system of equations that solve the nodal voltages for this circuit?
1
Can't understand a given answer about a 1st Kirchhoff's law question
0
Circuit analysis by local application of Kirchhoff's current law and Ohm's law