How to understand the block diagram of microcontroller Architecture

I am started learning pic18f4550 controller . I find it difficult to understand the architecture block diagram . i cant understand how peripherals, cpu core (eg ALU), data bus , program bus are interlinked. I have googled a lot but didnt understood.pic18f4550 block diagram 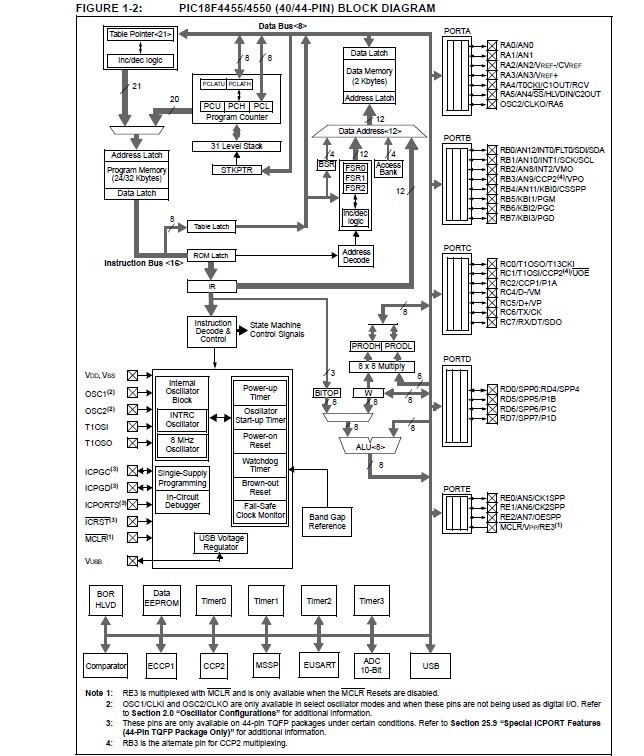 If I were a beginner trying to undertand how a microcontroller functions I really wouldn't start with something this complicated. First off, the block diagram is not a circuit diagram. It does not show how one part is wired to another it identifies sub system blocks within the chip and how data flows between them.

Consider the internal function blocks of a much simplified (minimal) system. 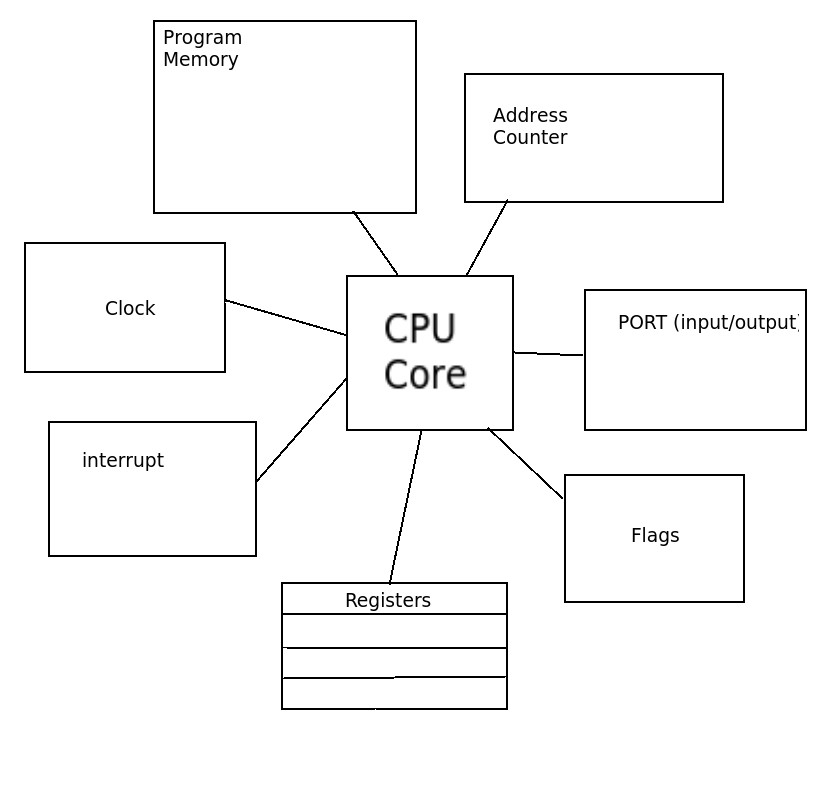 At the heart of the microcontroller is a (Central Processing Unit) Core - ('instruction/decode/control', 'State Machine Control Signal') It functions by interpreting requests and executing a sequence of operations (the actual 'brain' of the controller)

Apart from power (which is not shown in these block diagrams) , there are three sets of connections (bus lines) between the different parts:

These are shown on the diagram in the question as gray thick lines with arrow heads indicating direction. The width of these connections (how many separate 'wires') can vary. Some are 16 bits wide, others 8 bit etc.

Consider how a PIC controller executes a program.

The CLOCK signal is used to move the CPU on to the next step. The CPU then executes the instruction. (say clear the interrupt bit)

In order to do this the CPU must address the flag register and perform a write operation.

Once the first program instruction has been done. The CPU increments the address counter on the next clock pulse and reads the contents of the program memory and so on and so on.

For input and output instructions the CPU will be told (in program memory) to send or fetch data to the PORT (which has an address).

Sometimes it need to perform arithmetic/logical operations so it needs temporary storage. This is where the Registers come in.

Similarly it has to handle an externally generated interrupt so there is an interrupt handling block. It ensures that the CPU is not interrupted mid stream in an operation but waits for the next (fetch instruction) point in the program. (The CPU remembers where it is in the program by saving program address and various registers to the 'stack' memory).

The PIC chip you have chosen contains a lot of other blocks such as an 8*8 multiplier, timers etc. They each have an address, control lines and data connected to them. Some require initialization by the CPU and then work under there own steam (Timer for example), Some store data (not program memory). Some communicate (UART, USB). Note that the internal address, control and data lines cannot be accessed from the pins.

I hope this gives you a clearer idea of how the chip functions and how to 'read' the blocks contained inside.

Not the answer you're looking for? Browse other questions tagged microcontroller pic digital-logic microchip or ask your own question.