I have to make an ADC conversion with an ATXmega MCU, in an air quality application.

The solution we found is to subtract this minimum voltage from the Vin with an op amp.

And now the questions: The voltage divider interact with the resistors of the diff op amp circuit (https://en.wikipedia.org/wiki/Differential_amplifier)?

Will it be useful to place a unity gain buffer on between the Vref_min and the negative input pin of the op amp?

Is this idea is achievable with a normal low noise op amp like this? 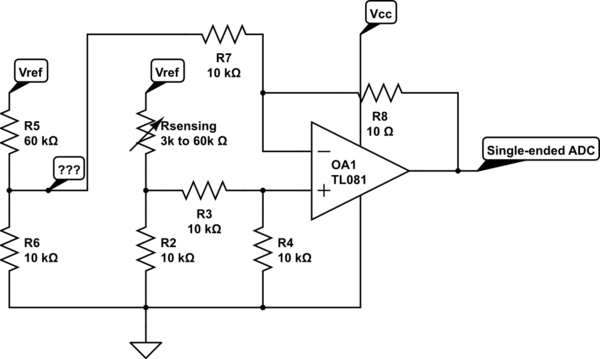 Here the schematic. I have to put an unity gain buffer instead of "???" node?

Is the circuit ok?

If you have a reference voltage of (say) 3V, the range your input will see is: -

If you used a 50uA current excitation and a grounded sensor, the range your input will see is: -

With a current excitation the percentage of your 3V reference range used is 95%. With voltage and resistor excitation you only get 63% of the range.

If your reference voltage is lower or higher, the above "range" statements are still true. 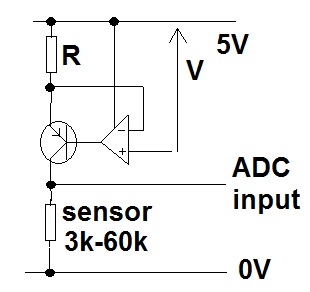 Here is an example. An ADC input is directly connected to the sensor. The sensor is fed with 50uA via the PNP transistor. The 50uA is measured across "R" and compared with "V" by the op-amp. The op-amp keeps the current through R at a value that generates a voltage "V" across it. Values could be R=10k and V=0.5V or R=20k and V=1V. Op-amp should be chosen that has close-to-either-rail IO performance like an AD8605 (used many times by me in this same configuration for strain gauge excitation).

Transistor used is BC547C or BC847C for those with good eye-sight.

While this doesn't directly address your question, it does describe a problem you are going to run into in the near future.

Basically, the ATxmega ADCs are pretty much unusable when connected to the xmega's internal 1.0V reference. You get ~16 counts of noise no matter what you do.

The general consensus seems to be that if you want to use the ADxmega internal ADC, you really have to use an external reference. Ideally, you could use the entire 0-3.3V range, but the ADC only supports references up to Vcc - 0.6V, so 2.5V is probably the best idea.

I recently was working on a project that had some user-interface pots that were connected to the xmega ADCs. I indeed wound up having noise issues. I was able to solve them by massively oversampling (x4096 times!), but it still only gave me maybe 10 bits of usable resolution.
Now, my layout was really, really non-ideal (the UI stuff was added after I had sent the boards off to be fabbed, it was hung off what was supposed to be just a debugging port, and had wires everywhere and whatnot).

Atmel has supposedly "fixed" the ADC issues on parts with the "u" suffix (Such as ATxmega32A4U vs ATxmega32A4), but I have not had a change to work with the "U" parts.

Yes, you can buffer the inputs to the differential amp, and there may be reasons to do so. However, an Instrumentation Amplifier like the AD620 is already pre-buffered and has easily adjustable gains. If You need single-sided rail-to-rail functionality (one power supply), there's the AD623.

Not the answer you're looking for? Browse other questions tagged sensor operational-amplifier resistors adc gain or ask your own question.