How does this soil moisture sensor work?

A likely mechanism for the operation of the sensor is by creating a Galvanic Cell battery out of the probe electrodes, with the moisture in the soil acting as the electrolyte / "salt-bridge".

From the Wikipedia page referenced above: 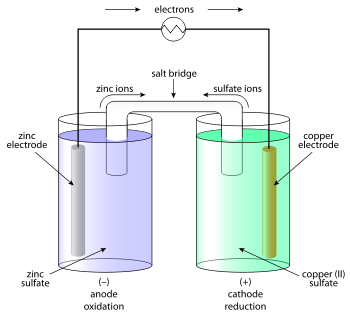 The "sensor probe" would consist of two dissimilar metals such as Zinc and Copper, which @JimDearden correctly surmises in his answer.

However, the actual current flow due to Galvanic redox reactions is what would create the energy to deflect the needle of the sensor, rather than conductivity of the moist soil alone. The moisture here works merely as an electrolytic medium for the electrochemical reaction.

This sensor would fail if used in distilled or otherwise very pure water, or moisture containing no dissolved salts / electrolytes.

As it requires no battery it looks like it measures the conductivity of the soil at three depths by creating a simple electric 'cell' from two dissimilar metals (inner wire and outer core)- probably copper/iron. If all three layers are wet the output will be maximum and the meter reading will be high.

Not the answer you're looking for? Browse other questions tagged sensor humidity or ask your own question.