I have a negation operation and two types of "logic gates" with following outputs (A, B are inputs):

I can join these two "gates" to form the third one:

Is it possible to use these (half gates or joined gates) to build regular binary logic NOR or NAND gates, given that it is possible to additionally negate any input and/or output?.

This is the only change needed to get the NOR gate. The question is how to do it with these "gates", if it's possible at all.

I'm trying to build the NOR/NAND gate with the use of inductively coupled coils. This is my personal interest and research :) I'm trying to prove (or disprove) that it's possible to build asynchronous logic circuits in this way.

Why didn't you ask that in the first place? It would have saved a lot of time.

Yes, it is possible to build logic with transformers. Have you ever heard of "rope memory"? It's a form of read-only memory built entirely from wires and ferrite toroids. It was used, for example, to store the instructions in the Apollo guidance computers.

The point is, a ROM (any ROM, no matter what the technology) is essentially a huge matrix of AND and OR gates, so it meets your basic functional requirement. However, it depends on exactly what you mean by "asynchronous" in this context. Transformers do not couple energy from DC signals, and so magnetic logic of this type is always driven by pulses, not DC currents.

I think your basic idea is faulted because in your system the OUTPUT of one gate cannot connect as (a defined) INPUT to another. A 'floating' input cannot be determined. Binary logic works because there are TWO defined (and related) states. Your system has THREE states (Trinary logic). but doesn't define the third state in terms of the other two. Instead of using a state that cannot be tested for (no output) why not give it a value that is different to '1' (high) and '0' (low) but related to them. I would suggest something like

It would then be relatively easy to detect each (voltage or current) state (H,U,L) and construct a 'gate' according to some logic with the inputs or outputs either positive, 0 or negative. 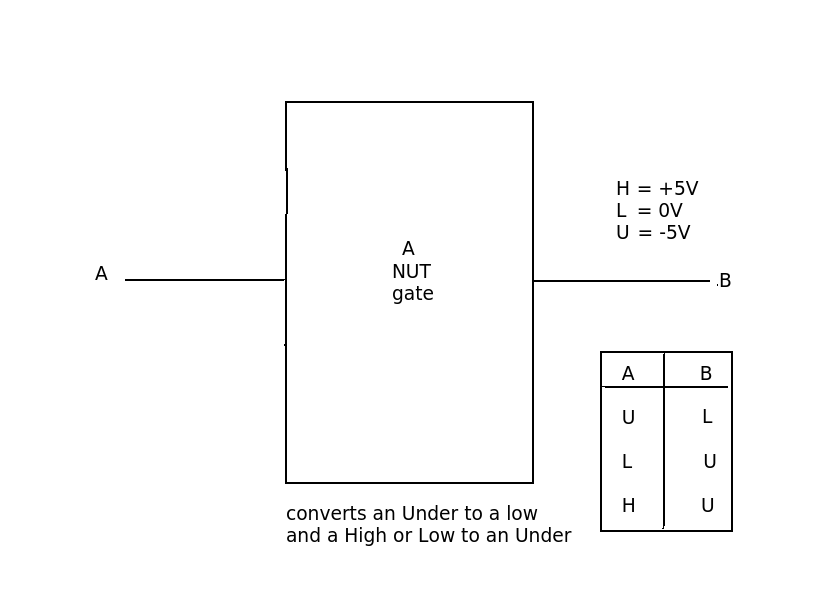 If I'm understanding this question correctly, you're dealing with trinary logic, where you have three states 0, 1, and x. You have two trinary gates: g1 and g2. (Note that the truth table for g2 is in a different order than g1) You want to create NAND and NOR gates out of these gates. I assume that you only care about 0 and 1 inputs to the NAND and NOR gates and don't care what they output for an x input.

To understand the NAND logic, note that g1 in effect is a "NOT majority" gate. It checks if there are more 0 or 1 inputs and outputs 1 for majority 0, 0 for majority 1, and x for tie.

1
Is there any such logic gate that accepts inputs from both sides and also stores information within the gate itself?
3
What is the minimum number of NOR gates needed to implement a 2-input multiplexer?
1
NAND gate that outputs 0 when all inputs are 0
2
Question about logic gate optimization and CMOS implementations
4
How many transistors are there in a logic gate?
0
Can the output of one logic gate serve as input to more than one subsequent logic gates?
0
Creating a majority gate using only NOR gates