How is “Overtemperature shutdown/protection” implemented for ICs?

IC data sheets often give some informations about the circuits over-temperature protection. Lets take a Microchip LDO (MCP1702) for example:

How exactly this is achieved on the chip-level? Especially the hysteresis behavior.

In short: a comparator-with-hysteresis compares a fixed voltage with a temperature-dependent voltage and shuts down the series transistor while it trips. 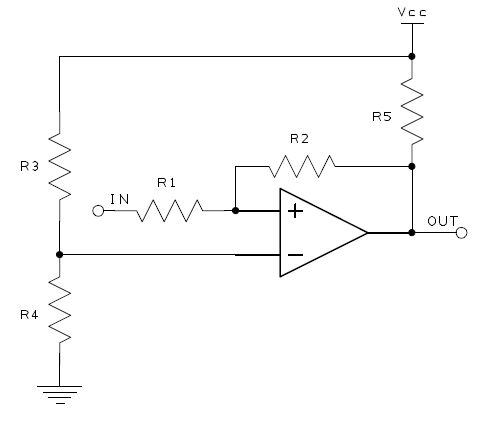 The circuit that is used to measure and correct for temperature pf the die is called a bandgap reference cell. The core of a bandgap reference is a PTAT (proportional to absolute temperature) circuit and a CTAT (complementary to absolute temperature). These circuits both output a current and when you sum these currents you obtain a reference current that is constant with respect to temperature. There are higher order correction factors that are also used (a simple PTAT - CTAT combination will have uncorrected quadratic terms for example) but not necessary for understanding here.

Now that you have signals that give you temperature states and temperature independent states you can easily see that this you can implement lots of different controls.

In many cases, the temperature is sensed by an element which is on the die near to, but separate from, the power-contorl element or other portions of the device which produce heat. There are a number of techniques for sensing approximate temperature without having to do anything terribly exotic; when the circuit senses that the die has gotten too hot, it sill simply turn off the "enable" signals that feed the power-control elements of the device.

Such designs can provide an inexpensive means of protecting circuitry against sustained conditions of mild but not outrageous overload. In many cases, they may be able to protect against even severe overload conditions, if the maximum power dissipation which can be produced in the device given the maximum operating voltage is sufficiently low that the over-temperature sensor will trip before the power-control elements are destroyed. It's important to note, however, that not all devices guarantee such behavior. I have seen a motor-control IC which IIRC was designed to switch an amp, and which would shut down nicely if it tried to drive a dead short while powered by a 24-volt 10-amp supply, but which would light up like a flare if it tried to drive a dead short while powered by a 24-volt 100-amp supply. In the former case, the supply itself could only supply enough power to heat the switching element somewhat slowly, so the overtemperature circuit would kick in before the switching element was damaged. In the latter case, the switching element dissipated so much power so quickly that it melted before the nearby temperature-sensing element could detect the condition and shut it down. Once that happened, the temperature-sensing circuit couldn't do anything to stop the thermal runaway, which ended up producing enough heat to fuse the power and ground planes in the PCB under the chip.

I don't know what fraction of power-control ICs are vulnerable to such behaviors, but ensuring that there's a limit to how much power can feed such chips may not be a bad idea. A fuse could do triple duty, both by adding a little resistance to reduce the worst-case amount of power the chip could dissipate, by perhaps interrupting power fast enough to prevent the chip from being damaged even if its own circuitry would not be fast enough to protect it, and in worst cast by stopping a thermal runaway condition before the chip can get hot enough to damage the PCB or other components outside it.

Not the answer you're looking for? Browse other questions tagged voltage-regulator integrated-circuit temperature heat-protection or ask your own question.

2
Heatsink or IC: how to determine root cause of overtemp?
1
L293DD overtemperature protection
9
How are ICs named?
4
what is the tempreture at which the thermal limit of an amplifier is reached
0
Help to calculate heat dissipation on plastic dual in line DIP package (DIP-8 opamp)
0
What will be case if buck regulator (TPS62067) load current increases the rated current?
3
How are OTP fuses in ICs implemented?
2
Using a diode to protect a voltage regulator