Will charging 2 capacitors seperatly still result in a lower value?

No, when you put capacitors in series, the capacitance is reduced. Here's one reason why. The energy \$W\$ in a capacitor is:

For your two 150F capacitors, each charged to 2.7V, the total stored energy is:

If you put them in series, and you somehow now had a 150F capacitor at 5.4V, then you would have the energy:

Somehow, you have created energy, which I'm told, violates some fundamental properties of the universe as we understand it. We know what actually happens with two identical capacitors in series is that the capacitance is halved. In that case, the energy you have after connecting them in series is:

You see, the capacitance is halved, but the stored energy is the same as the two capacitors charged separately, as you'd expect.

Here's where you are confused: capacitance is not capacity. Capacitance is a measure of how much electric charge it takes to make a change in voltage:

So why does putting two capacitors in series halve the capacitance? 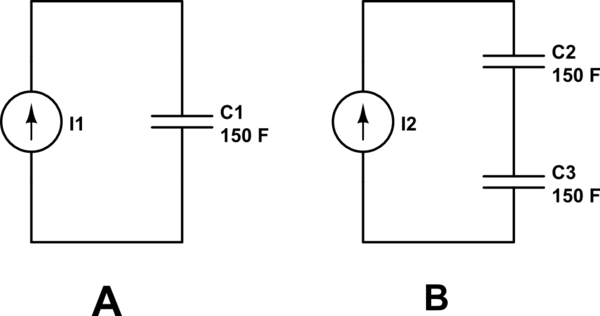 Consider circuit A. If \$10C\$ of charge moves through I1, then this same charge must flow through C1 (where else would it go?), and the voltage will change by:

Now consider circuit B. If \$10C\$ of charge moves through I2, that charge flows through C2 and C3. Looking at each capacitor individually, the same charge has moved as before, and the voltage of each will change again by \$66mV\$. But, they are in series, so the voltage of the two considered together has changed by \$133mV\$. What's the capacitance?

For every bit of charge you move through I2, you charge two capacitors at once, so the voltage changes twice as fast, so the capacitance is halved. But, to get that charge to move you had to apply a higher voltage (because the voltage increased faster), so the stored energy is the same as if you had charged them separately.

The unit of capacitance, the Farad, is the ratio of (the magnitude of the) charge (on one plate) to the voltage (across the capacitor):

(2) Since the voltage has doubled but the charge on either "external" plate has not changed, it is necessarily the case that the capacitance is 1/2 the individual capacitance.