How to design a non inverting op amp adder for my circuit?

I am trying to implement an adder for my circuit using 4 resistors. From what I read, I understood that so long as you have R1 = R2 and R3 = R4 it really does not matter what value you use. The ultimate result would be V1 + V2.

Now, what my problem is that I have a signal which goes to 1.2 - 1.8 V on the +Ve side and till -800 mV on the -Ve. I want to scale up the signal to the positive level and tried the same thing as given here.

Am I doing something wrong? If yes, is there a better way to do it?

Note that just two resistors actually gets you a good way to your goal:

There are still some tradeoffs to make and issues to be aware of, however. We know that R1 should be the same as R2, but what absolute value should those be? This depends in part on what V1 and V2 can drive. To minimize load on V1 and V2 you want to make R1 and R2 as high as possible, but if you make them too high the node on pin 3 will too easily pick up stray noise, the leakage current of the opamp will create a relevant offset voltage, and the inevitable stray capacitance on that node will form a low pass filter. Unless you need very high bandwidth, 10-100 kΩ will be good value for most cases.

Note also that this circuit does not isolate V1 and V2 from each other as a summing inverting amplifier would. Each sees the other with a impedance of R1+R2. Maybe that doesn't matter, but you need to at least think about it.

As for R3 and R4, you make them lower to support higher frequency, but not so low as to overload the output of the opamp or drain too much current. For example, if R3 and R4 are 1 kΩ each and the output often sits at 4 V, then this will eat up 2 mA of supply current. That is probably irrelevant if this is part of something like a TV, for example, that is plugged into wall power. However, 2 mA can make a significant difference in a battery operated device. I'd probably again use 10-100 kΩ for each of R3 and R4 unless there is a good reason not to.

The general form of the summing amplifier is an invaluable resource in the toolkit of an electronics engineer. The general circuit shown below can be solved using Kirchoff's Current Law and a horrible heap of algebra, but if you're happy to take my word for it, it all boils down to one simple equation and one condition which must be obeyed. 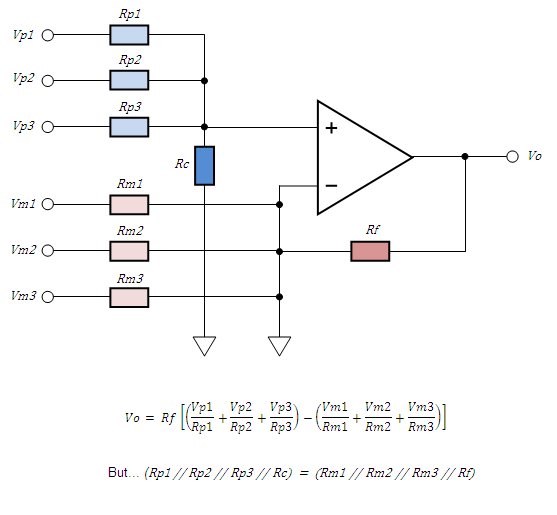 You can have as few or as many plus- and minus-inputs as you like, 3 each are shown here for illustration.

In your case, you have an input in the range -0.8V to +1.8V and want to add 0.8V and scale the result to fit the range of your ADC. You don't say what ADC range you need, but as an example I'll choose 5.0V, and assume that you have 5.0V available as a stable analogue reference for the added term.

Hope that helps, and gives you a useful tool for future designs.

I realize this post is quite old, but for he sake of future searches: The best and most generic answer is here: http://electronicdesign.com/ideas-design/efficiently-design-op-amp-summer-circuit

There is a small modification on Billysugger's approach that makes it much easier to compute resistor values.

Not the answer you're looking for? Browse other questions tagged arduino microcontroller operational-amplifier or ask your own question.

1
How to add a DC bias?
-1
high amplitude pulse for short time followed by long pulse of low amplitude
1
Increasing the opamp gain is decreasing the DAC resolution