I'm trying to find out how this works out of curiosity.

Does anyone have a circuit diagram for the circuit? Is the current safe for such a prank? 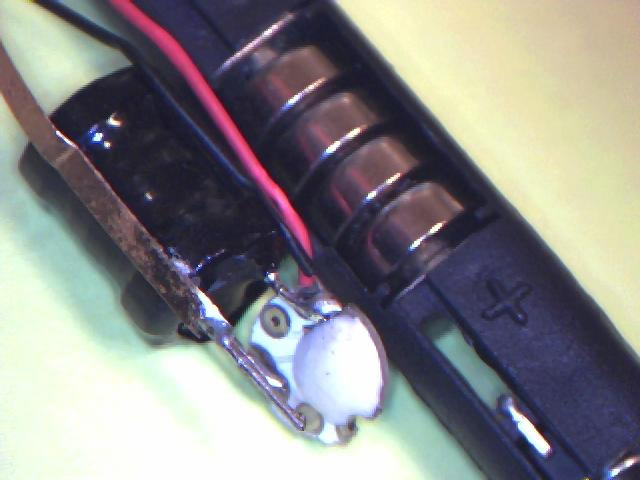 The above image is a literal layout of the circuit. The 50k load is the user's hand. Both switches are closed upon pressing the button. The switch is before the capacitor. This is based on closely observing the circuit and is 100% accurate unless someone can prove otherwise. I tested this with varying capacitance and inductance values and was unable to induce a significant current in the load for more than dozens of miliseconds. When testing I moved the virtual switches from the ground to the positive wire. When I move the switch after the capacitor I can have a long lasting current through the load, but the voltage/current are very low.

Edit: It is beginning to appear as if the white piece (Shown as cap above) is an active component/IC. There may not even be a capacitor in this circuit.

Here's a little circuit that might fit the bill 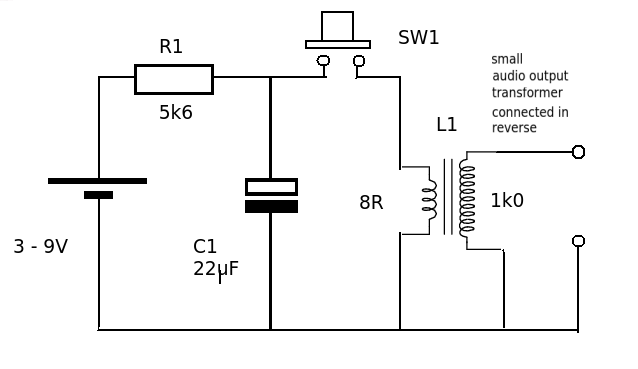 The battery charges the capacitor (C1) through a resistor (R1). When the switch is operated the charge from the capacitor is dumped into the primary of the transformer. This produces a damped oscillation (LC circuit). The transformer secondary has a lot more turns than the primary and so the VOLTAGE part of the short burst of alternating current in the primary will be magnified by the turns ratio. The current part will be diminished. The total energy delivered to the 'shock' can be estimated from the energy store in the capacitor. (0.5 * C *V^2). For the values given = 0.5 * 22 * 10^-6 * 9^2 Joules or 891 micro joules - pretty harmless. The transformer is a small audio output type but others can be used such as the trigger transformer for a flash tube (hacked from a cheap camera) or you could even wind you own on a ferrite ring.

The white object looks like a chip-on-board circuit (blob of epoxy over unpackaged integrated circuit). The basic scheme could be a spark coil (flyback type voltage boost, similar to a three-terminal automobile spark coil) or a vibrator-style inverter (like the old Model T spark generator).

The observed frequency indicates that an oscillator is in use, and one expects that a NE555 or similar astable is in the white component. If this is the case, it ought to have three wires, and/or some other connection than parallel to the coil primary winding. 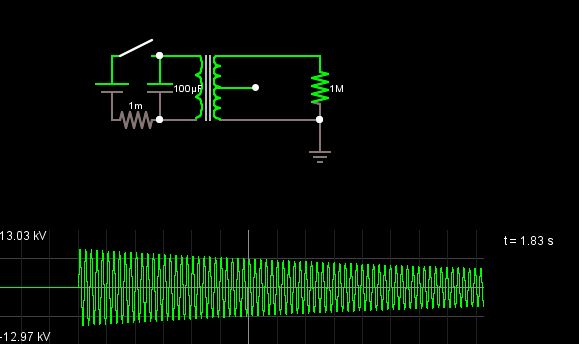 When the switch is switched on, the primary inductance causes the current to build up in a ramp. When the switch is turned off the energy stored starts the resonant circuit on the primary side thereby inducing a high voltage in the secondary. The principle is the same as in the old fashioned ignition systems in cars

Most likely this gadget has a piezoelectric element in it, which generates a large voltage at extremely tiny current when the device is activated. You feel a shock from it but it's not generally harmful. Similar technology is used in gas barbeque igniters.

EDIT: Based on the picture, I'm not so sure any more. The watch batteries could be used to source a voltage multiplier circuit of some form to generate the shock potential. The heat-shrunk component could be an inductor to which a DC current is applied then interrupted to generate the high voltage, or could be a capacitor.

2
How in the world does this prank pen work?
0
Using a microcontroller to produce a shock
1
Voltage / amperage / setup for tingling sensation

5
Operating Temperature Range question for Inrush Current Limiting Thermistors
0
How does earth ground complete the circuit?
7
Is it possible to "trace" a hall effect sensor on a PCB?
2
Delay current flow
1
How to build an electric rat trap / deterrent
0
Why do we not get shocked by neutral wire and how can it behave as it does?
2
How do I safely power 2m 144 LED/m WS2812B strip with 5v and 10a?