I'm new here and also new to electrical engineering so no fancy stuff yet, still tinkering with basic components such as resistor, led, caps and batteries. I think I caught up with the bad side of conventional + and - so I'd like to impose a few question.

I was reading this book "All New Electronics Self-Teaching Guide, 3rd Ed" by Kybett and Boysen to remembers bits what I've learnt so far. On Ch 2 about diode, I stumbled on the idea of the voltage drop in diode. In a series of resistors, it's pretty straight forward, it's a ratio of resistors' value, higher value drops more voltage, etc.

But when a diode is introduced after the resistors, you have to decrease the source voltage with the voltage drop of the diode first before you can measure the new voltage drop of each resistor. Why is this happening? Is it pretty bizarre to count backward first as the current move from + to -.

Also I've seen several examples where a resistor is introduced before anode, which I think is logical and introduced after cathode which is plenty weird as resistor is used to limit the current going into the led but in actual reality, both do just fine(I tried both ways). Is this because of positive charge and negative charge? Because P-N junction, holes and p stuff?

Update (request by Anindo) : Here is the page of the book in googlebook

Junction diodes are constructed from a single crystal of semiconductor material that has been altered to form a PN junction. 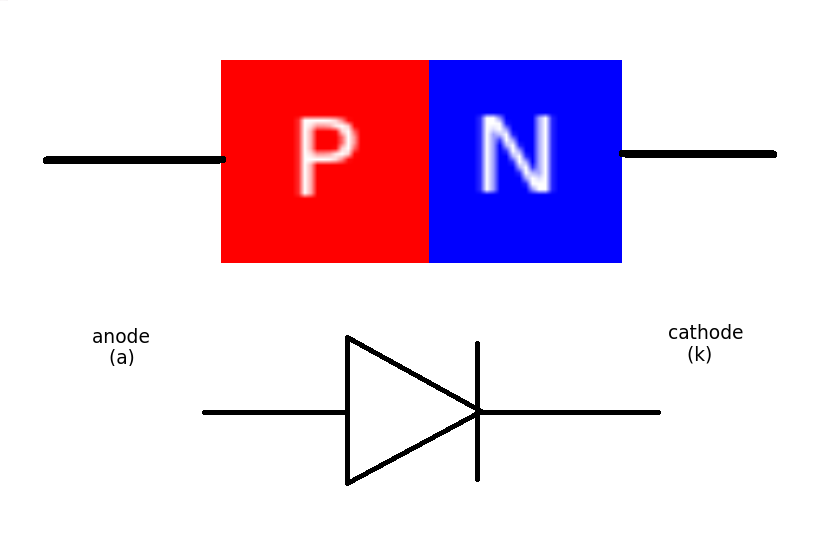 The reason semiconductor materials are useful is that we can easily alter their electrical properties (especially conductivity) by adding or DOPING them with (very) small amounts of other elements. These doping atoms fit into the crystal lattice but their different electron structure alters the way electrical current can flow through the material.

N type has lots of 'extra' electrons because the dopant had 5 electrons in its outer shell - 1 more than (intrinsic) semiconductor.

Similarly P Type has gaps or HOLES in the outer electron shells because the dopant only as 3 electrons compared to 4 of the (intrinsic) semiconductor.

When the PN junction is made the material in the 'middle' is neither P or N type as all the free charge carriers are swept to one side or the other. This is known as the DEPLETION layer. (a bit like no-man's land between two opposing armies) 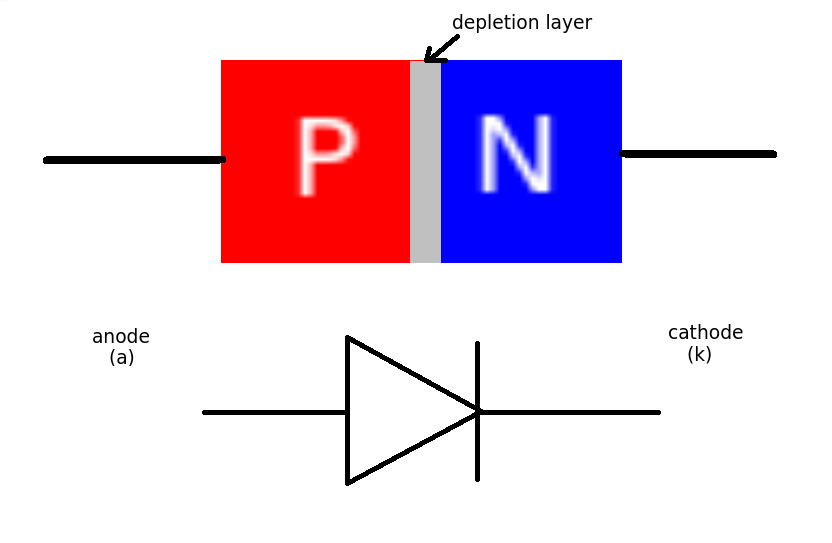 This depletion layer is the source of the voltage drop across the diode.

To get current (flow of charge) through the diode the charge has to 'jump over' this barrier (its more technical than that but let's keep it simple). It needs an extra bit of energy to do this.

The barrier acts like a small battery of 0.6V connected in the OPPOSITE direction to the current flow. (Conventional current - positive to negative). You can only measure this when current is flowing through the diode.

Photodiodes can generate actual voltage but that's another matter. 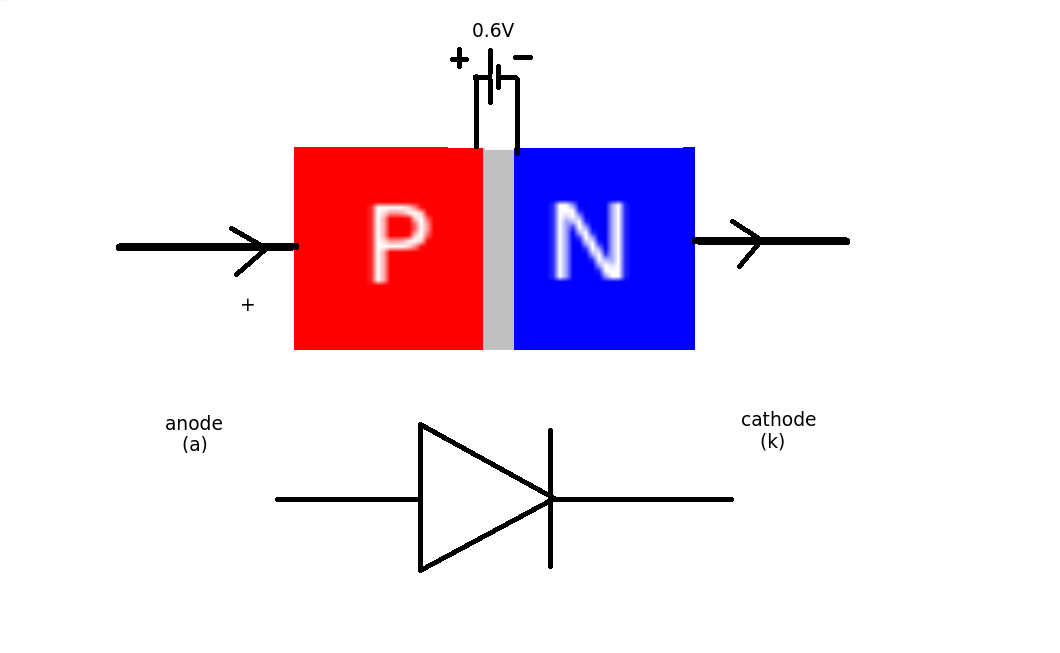 This means that for every diode in the circuit we will lose 0.6V when they are conducting (forward biased). (This increases slightly with current value) 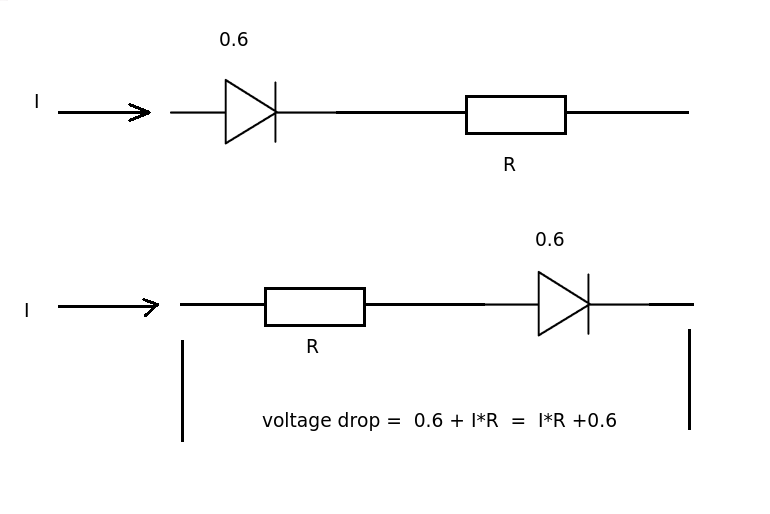 The LIGHT EMITTING DIODE has a much larger voltage drop (about 1.5V - 3.0 V) than a 'normal' diode. It uses this extra energy to output light. 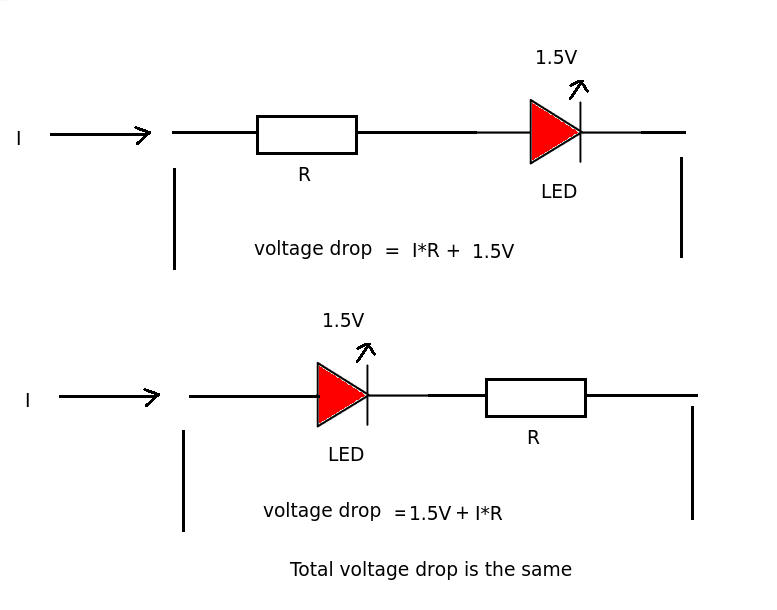 Since the diode can't be in either mode, it must be right on the edge between them...sitting right at 0.6 V with whatever current through it is allowed by the series resistor.

As for whether to connect the resistor on the anode side of the diode or the cathode side, it doesn't matter. Just like with any two resistors, the current flowing through them only depends on the sum of the two resistances, not what order they're hooked up in.

Here is a graph of the voltage-current relationship of a diode. Voltage is graphed on the x axis, and current is graphed on the y axis. The graph is an exponential curve. The key idea to take away from this graph is that no current flows until a small voltage occurs across the diode, at which point virtually any current produces close to the same voltage across the diode.

For example, look at the voltage produced when 3 A of current goes through the diode. From this graph it looks close to 3 V. Increasing to 4 A of current only increases the potential difference to ~3.05 V. In reality, most diodes reach forward bias at about .7 V. Because the voltage changes so little with current, a good approximation for their function is just to assume that the voltage drop is always around .7 V when they are forward biased.

If you want to dig deeper, this effect is a consequence of the non-linearity of semiconductors. Diodes are also called a "p-n junction", searching that term should provide you information about the mechanism by which this occurs.

5
Signal rectifier - what is the use of the resistors?
3
Zener diode can vary current flow to maintain voltage drop, how does this magic effect work?
6
Max voltage vs current for LED
7
Multiple diodes in series reverse biased
3
Question about diode strings in high voltage applications
0
What exactly is a diode and how do I use it to step down voltage?
0
Very basic diode question
25
Basic diode question about voltage-drop
0
Measuring Diode “Pushback” Voltage
0
Zener Diodes with low forward voltage drop