Ask Question
Asked 6 years, 8 months ago
Active 6 years, 8 months ago
Viewed 8k times
-2
\$\begingroup\$
It's difficult to tell what is being asked here. This question is ambiguous, vague, incomplete, overly broad, or rhetorical and cannot be reasonably answered in its current form. For help clarifying this question so that it can be reopened, visit the help center.
Closed 6 years ago.

i've Speaker with woofer requiring AC 12 voltage, and i have DC 12 voltage Adapter. However, speakers are working properly.

but Can i use DC 12 V Adapther with the Speaker which is requiring AC 12 voltage, without any future damage ?

No. There is an important difference between AC and DC.

AC is Alternating Current, which means that the poles of the voltage source will switch continously at 50 or 60Hz, depending on your geographical location. This looks like this:

However, DC is Direct Current, which means that the poles of the voltage source will not switch: one is the positive and one the negative, and that doesn't change. A diagram: 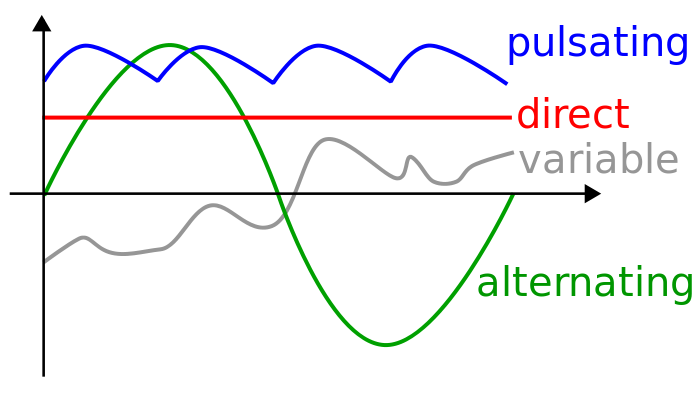 When your device expects an AC voltage, it's most likely that will be transformed to another voltage, for what it needs AC, or he just needs AC for something else. In either case, DC won't work and might harm your device!

The OP says the 12VDC adapter is "working properly" and I had a suspicion it would work although probably not 100% properly. He's using it to provide power to a woofer speaker and without doubt, if the spec says 12VAC, this voltage would be converted to DC at some point in the woofer system.

I would also speculate that it is unlikely that there would be a conventional transformer inside the woofer amplifier that would need AC power in order to produce a different AC voltage - this would not make sense because cost would dictate that the woofer amplifier takes the AC power direct and converts to DC.

Simplest way to convert to DC is of course a rectifier and smoothing capacitor and this will also allow DC through without any issues. So I am speculating that a modern woofer with inbuilt amplifier would probably work from DC BUT with certain limitations.

The limitations are to do with the DC that is obtainable from 12VAC - it's likely that the internal DC voltage after the rectifier will be about 15.5VDC and this is higher than you would obtain from a 12V dc supply (it would yield about 10.5Vdc).

This means that for normal listening levels the woofer amplifier will produce sound levels from the speaker with little distortion BUT when called to produce bigger sounds distortion will creep in much earlier because the power rails are not high enough to do the job.

I'm certainly not recommending that my answer be taken as a statement that this will always work....

It won't always work but, on a system like this, there is a reasonable probability it will work adequately but not to full spec. There is also no excuse for not using the proper PSU adapter BUT if I was faced with this scenario I'd probably pop the lid off the equipment and check to see that there is a bridge rectifier on the power input to the amplifier and that would be enough to confirm it will work.

Not the answer you're looking for? Browse other questions tagged power-supply voltage ac dc ac-dc or ask your own question.

3
Why do some power adapters output an AC voltage?
2
Disassembling AC adapter