Do electrons actually flow when a voltage is applied?

It's said in books that a circuit is a closed path and thus that electrons come back to the source. If that's the case, what would happen when there were an earth fault in a circuit? How would the electrons return to their source?

Do the electrons actually move out of their atoms or do they just vibrate and transfer the energy that way when we apply a voltage?

Thinking about current in terms of electrons moving around is the start down a path to a poor mental model of how electricity works. Here are just a few things wrong with it:

The important thing is this: charge carriers (electrons being one of such) can be used to transmit an electromotive force (usually called just voltage). This is a pretty ordinary concept, really. You can push one end of a rod, and transmit a mechanical force to the other end of the rod. Does the rod move, when do you this? Well, maybe, but there are two things happening here:

So, your question was: Do electrons actually flow when a voltage is applied? Strictly speaking, the answer is maybe, and it depends on what you mean by flow. It's similar to the question, does a rope move when you pull it? Well, if it's attached to a balloon, it might move a lot. If it's attached to a brick wall, it might not move at all.

How the individual charge carriers interact to accomplish this is complicated, and it's really a physics question, not an electronics question. However, I'd suggest you check out this MIT tutorial on fields.

Electrons do physically move when a voltage is applied - extremely slowly.

A circuit energized at 100VDC, powering a 1A load (like a light bulb) through 2mm diameter copper wire will see electrons moving at the rate of:

This works out to 8.4 cm/hour. Not exactly fast.

What's key is the fact that it's the energy that races through the circuit almost instantaneously - not the electrons themselves. (The electrons make a convenient 'highway' to allow the energy to flow quickly.)

It's unfortunate that the slow drift of electrons under a voltage ended up with the same name as the energy flow that actually does work in a circuit.

A note about "closed" paths

It's like dominoes that fall. The energy wave propagates through the falling dominoes, but the dominoes don't translate much.

Remember energy is the charge of the electron times the force applied to it (voltage). It is (overwhelmingly) the forces that are moving through the metal lattice, not the charges (electrons). 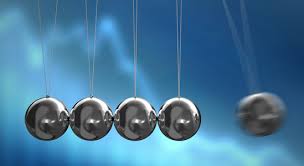 The forces transfer across the balls, but the balls stay largely in place. Unlike the mechanical balls, which are balanced by gravity, with electrons in metal wires from galvanic cells (batteries), there is a slow overall drift of the electrons (like cars stuck in traffic) to the other end.

You might consider this answer I gave to a similar related physics question.

We're talking about metals here. Typically, an object of metal does not consist of molecules. It consists of metal atoms, all grouped together. This is shown in the picture below:

The red circles are electrons. As you can see, you can't really say to what atom an electron 'belongs'. These electrons form the connections between the atoms - so they belong to two atoms.

Now, when a current starts flowing, these electrons indeed move. When a current flows, energy is transferred. Since the atoms can't move easily, the electrons have to move.

You can see this in the unit Ampere of current as well: 1 ampere equals 1 Coulomb per second. The Coulomb (C) is the unit of charge (Q). 1 Ampere means 1 Coulomb of charge passes a certain point in 1 second. This charge is produced by the electrons that actually flow from object one to object two.

When we're talking about DC current (normal battery-powered application, for example), these electrons will not return to their source. Consider this circuit:

You can now see that these electrons did not return to their source: they started at the negative pole and ended at the positive pole. 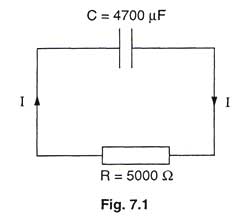 We just call it a closed path, because current starts and ends at the capacitor.

Since the electrons don't really have to return to their base, you can now understand that electrons can flow into the earth as well. This is also what happens with lightning. Electrons flow from the clouds to the earth (or the other way around, I wouldn't know), just to neutralize the difference in charge.

Not the answer you're looking for? Browse other questions tagged voltage current circuit-analysis charge or ask your own question.

87
Where does electricity go after being used?
19
Is there an implicit "unit of time" involved in electricity measurement? (e.g. miles per hour, kb per second, amps per ???)
6
How does residential electricity work?
5
Electrons of the current in a circuit?
3
Does free electrons from the conductor itself flow or electrons inside the battery flow?
1
Why does current have to return to its source in a circuit?

12
When does and when doesn't current flow to ground?
0
Why would electrons cross a cross section when there is no potential difference?
0
Best visualization of electric current and voltage
1
Why does current have to return to its source in a circuit?
3
Why doesn't electricty flow to earth ground when I connect my oscilloscope ground clip to a floating circuit?
1
What actually flows, current electricity or charge?
0
Do electrons still move in a wire in an open circuit?