Does a ground fault compromise the whole circuit? 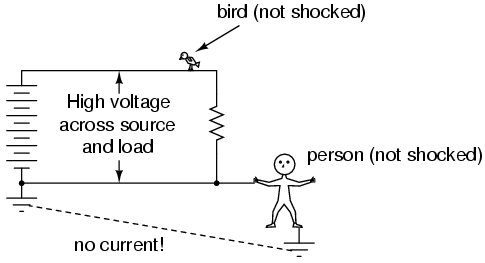 (this image taken from http://www.allaboutcircuits.com/vol_1/chpt_3/3.html)

Based on this picture, would a tree across the bottom wire of the circuit (the solid wire, not the dashed wire representing earth) cause the person to be electrocuted? Am I correct in thinking the tree would cause a voltage drop?

EDIT: To clarify, what would happen if a resistor was added to the bottom, solid wire?

I assume the neutral wire is still unbroken after the tree is across it, in this case nothing would happen. The tree is already at ground potential, as is the neutral wire, as is the person. If the neutral conductor is broken then there will likely be an introduced earth fault impedance (either tree or person) and the load would see a voltage drop. If the person becomes the lowest impedance to earth then he will likely be zapped.

It appears the person in the diagram is touching the bottom wire, which is connected to ground. The person is not shocked because there is no potential from the wire being touched to earth ground underfoot.

I assume you mean if a tree (as in the plant) connected both the top and bottom wires, would the person be shocked then?

The answer is no, the potential difference would be across the portion of the tree that is making the connection.

If the person continues to make contact with the ground wire during such an event, there would be no noticeable effect.

The situation you illustrate is one of the major reasons why it is important that safety ground connections be kept isolated from neutral connections.

One of the limitations of normal safety ground protocols is that while multiple faults are required to create harmful conditions, it's possible that enough faults may develop that the system is one fault away from electrocuting someone without those faults causing any symptoms. For example, it's important that the safety ground and neutral wire have no connection to each other, except via separate paths to earth, but there's no way short of disconnecting the neutral to ensure that's the case.

Not the answer you're looking for? Browse other questions tagged ground safety or ask your own question.

5
What is the right way to understand the behaviour of shocking voltage?
1
Ground Fault Question Regarding a 3 Phase Circuit
2
Headset input crosstalk, or how to mitigate the effects of common ground resistance
0
How does earth ground complete the circuit?
1
How does grounding the circuit provide safety?
10
ESD strike on exposed circuit ground pin
1
Proper Chassis Grounding