First of all, I have searched the internet all day long, including here on stackexchange, and couldn't find a clear solution. Only ambiguous answers and dead links.

And the biggest question is this: How do I actually use inpout32.dll? I can't find any example! It's either for Basic or C#, or even more frustrating, dead links! For starters, I'd Like to simply turn on and off the LED. Then I can figure out more complicated projects.

First off getting access to the parallel port in Win7, Vista and even WinXP is a major effort. Microsoft took away the ability for normal user code to be able to directly access the hardware registers. Instead they virtualized the accesses and if you try to do they they normally appear to have executed but they do not end up touching the hardware. To get access some special device driver solutions were devised, InpOut32.DLL is one example, that let user code indirectly access the port because the driver runs in system mode. I have previously used InpOut32 for some experiments and found that it adds quite a bit of latency to the accesses such that even on rather high speed machines the fastest available toggle rate of parallel port pins was on the order of less than 22KHz. When I used it I was coding in an unmanaged coding environment.

When you start writing code in something like VS2012 using managed code under Microsoft's .NET framework you have to jump through a lot of hoops to get add-on drivers such as InpOut32 to work (and it is not even certain that that particular driver is even workable in Win7's 64-bit environment). I have not attempted it in my current 64-bit environment because it is just not worth the effort to try to eek it into functionality because there is an additional loss of performance when calling an unmanaged driver from managed user code. One's time is much more well spent using one of the multitude of USB choices available to get access to external I/O via a USB bridge I/O device.

One really easy little board that you can build into project and connect to a PC with a Mini-B USB cable is the USB Bit Whacker from Sparkfun Electronics. This little board shows up on the PC as a virtual Comm port and is able to accept very simple text commands that will toggle the outputs on and off or monitor the inputs. 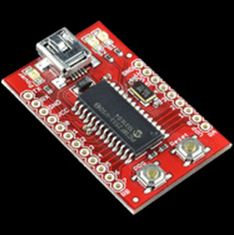 Use their IOPort product. I have used this driver often on XP with C++ Builder and it just doesn't get any easier. For example, you can write to either the data or control lines like this where data_addr is typically 0x378 and

Its been a while since I've used this, but I think you have to set one of the ctrl bits before you can read the data_addr. I believe the ctrl lines are write only and the status line are read only.

Just in case, here is a pretty good article on using the printer port. http://et.nmsu.edu/~etti/fall96/computer/printer/printer.html Pay particular attention to the 330 Ohm pull up resistors they show. They are a must use.

Also pay attention to bit 5 on the ctrl port. It controls whether you are reading or writing the 8 data bits.

Not the answer you're looking for? Browse other questions tagged led programming parallel c++ port or ask your own question.

7
Programming a parallel port as digital I/O
5
Simulation of parallel port but without a parallel port
2
C++ microcontroller/processor selection
3
Parallel port output
1
Writing to parallel port with minimum latency
3
Figuring out the functions of PIC numbers in a data file
8
Replacing incandescent bulbs with LEDs, unexpected behavior
3
Reduce flickering on cheap 220v AC GU10 LED Lamps
0
Confirmation on Diode in parallel with a Resistor
0
Trying to get 2 LEDs blinking of 3v mains supply