If voltage is measured between two points on a wire, with no resistance in between is the voltage zero?

I have a series circuit. Let's say the battery has a potential difference of 10 Volts.

On two points of the wire before the current hits any resistors, I attach the readers of a voltmeter. Since there is no resistance, and the formula for voltage is V = IR, does this mean that the voltage would read zero in between those two points?

But how can this be - we know there is 10 volts of current flowing through!

The example my teacher gives is that electricity is like a running river. The voltage is the force of the running water. Pile rocks in middle of the river and this is the resistance. But if you don't pile rocks and measure at two points, that doesn't mean that there is no power (read: voltage) in the river's flow.

Can someone please clarify? 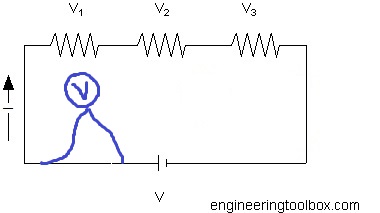 You seem to have voltage and current conflated.

Voltage is more properly called electromotive force. It does not, in itself, flow, or transfer energy.

Current (usually measured in amperes) is a measure of how much electric charge is moving per unit of time. Current is also not, in itself, a flow of energy.

The flow of energy is called power. To have power, you need both current (\$I\$) and voltage (\$E\$). The power is equal to the product of the two:

If you have force but no velocity, you have no power. An example would be a rubber band stretched between two stationary supports. The band is exerting a force on the supports. This tension is potential energy. But, nothing is moving, and none of that energy stored in the stretched band is being transfered to anything else.

However, if the band can move the supports, now we have velocity. As the band moves the supports, the energy stored in the stretched band will be converted to kinetic energy in the supports. The rate at which this energy transfer happens is power.

Here's a mechanical system that's more analogous to your circuit: 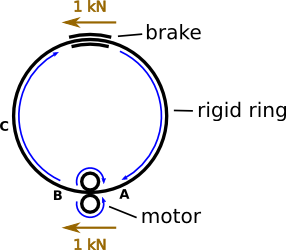 We have a rigid ring, attached to a motor that applies some force to turn it. Also attached to the ring, we have a brake, which resists the turning of the ring. For this analogy to be proper, this has to be a brake that provides a force proportional to the velocity of the ring moving through it. Imagine it's coupled to a fan, so as the ring turns faster, the fan turns faster, creating more aerodynamic drag.

If the motor is applying a force of \$1kN\$, then the brake must be applying an equal force in the opposite direction. If the brake's force is not equal to the motor's, then the ring will experience a net force that will accelerate or decelerate it until the brake's force is equal, and the ring turns at a constant speed. Thus, if the force of the motor is constant, the speed of the ring is a function of the strength of the brake. This is analogous to Ohm's law.

What other forces are acting on the ring? Since we are considering an idealized system with no friction, there are none. If you were to insert strain gauges at points A and B, you would measure a difference between them. B is being compressed as the motor shoves the ring into the brake against its resistance, and A is being stretched as the motor sucks it out of the brake.

But what's the difference between B and C? there is none. If that's not intuitively obvious, consider that you must cut a gap in the ring and insert your hand so this machine can smash it. Is there a point at which you'd prefer to do this? No, your hand will be equally smashed regardless of where you do it on the left side of the ring.

The forces measured by the strain gauges are analogous to voltage. We can only measure voltages relative to some other voltage. That's why your voltmeter has two probes. Wherever you put the black lead is defined as "0V". So, the scenario you present in your question is like measuring the difference between B and C: it is zero.

This seems a little weird, because we know there is a compressive force on that entire side of the ring. It seems like that should be good for something. But consider this: the weight of all the gas in Earth's atmosphere results in a pressure at sea level of about 15 pounds per square inch. Does this mean we can make a machine that's powered just because it's exposed to this pressure? No. In order to do work with this atmospheric pressure, we need a difference in pressure. Without a difference, we can't make the air move. Consider again the definitions of power above, and it should become clear how this is true.

Your voltmeter and your teacher are both right, but the water analogy of electricity can only go so far. One big drawback is that, unlike with water, there is no absolute voltage. Voltage is always relative between two points.

There is no such thing as "10 volts of current flowing around". Voltage is the force that pushes the charges to make current. Current is the charges actually flowing. It is quite possible to have voltage with no current, and current with no (or no measurable) voltage.

Your teacher's river analogy actually still works in this case if you apply it correctly. Voltage is the pressure in the river pushing the water downstream. In a river, you can see this pressure as the altitude of the water surface. When you pile rocks in the river, the suface of the river will be higher above the rocks than below. That would show up as a pressure difference if you measured with a relative pressure guage between above and below the rocks.

The wire is like a river with no rocks in it. The pressure at one point and a few feet upstream are still basically the same. That is what your voltmeter is showing you. One difference between a real river and a copper wire is that the copper wire is a much more ideal river, unlike anything real water can do. The wire is so not-rocks (not a resistor) that very very little voltage builds up for the flow. There actually is a small difference in voltage between the two points on the wire, but the wire is such a good conductor that this voltage difference is too small for a ordinary multimeter to measure. If you replace the short piece of wire with a few 10s of meters of wire and then measure accross that, your multimeter might show a small voltage.

there is 10 volts of current flowing through!

Voltage does not "flow". It is a measure of electrovoltaic potential, and so only exists across two points.

It's the same as trying to measure the height of a mountain; there is no such thing as an "absolute height", there is only height relative to something else, e.g. the plains around it, sea level, etc.

The thing about voltage is that it must always be measured relative to something. In other words, meters measure voltage differences not individual voltage levels. In an ideal situation, the meter in your example will read zero. However, even wire has a small bit of resistance so there will be a very small voltage reading if you have a meter with micro-volt precision.

Here is an example one of my physics teacher told us to help understand this concept. Imagine you are on top of the Empire State building. That height does not harm you. However, if you were to jump, the difference in the height would kill you. This is the same concept with voltage.

Actually there is a voltage drop between any two points along the wire - but it will be small because the resistance of the wire is small (even the wire has a few pebbles in it).

Example: If the resistance of the wire between the two prongs is very small (say 1/1000 ohms) and a current of 1 Amp is flowing there will be a voltage drop of 1/1000 th of a volt (0.001V) between the the prongs of your voltmeter.

If your voltmeter is set to a 10V range you will not see this voltage drop and the meter will read zero.

If you can get a voltmeter to measure down to the mV or even uV range you will see that as you move the prongs of the meter along the wire you will get a change in voltage as long as current is flowing through the circuit.

If there is NO current flowing (i.e. the circuit is broken) you will not get this change in voltage.

This is because a Volt meter is measuring the difference in voltage between the two probes. Because there is no circuit element such as a resistor in-between your leads to drop the voltage, the voltage difference is zero, and you will get a voltage reading of zero. In regard to your river analogy because there are no rocks (AKA resistors) the amount of water and how fast the water is going in-between your probes will be the same.

If voltage is measured, then the voltage is whatever the measurement says, by definition. If you just call it zero based on other reasoning, like the resistivity and distance of the wire, and the amount of current flowing, then that no longer takes into account the measurement.

Not the answer you're looking for? Browse other questions tagged voltage resistance or ask your own question.

10
How can I check that the voltage output from this voltage divider is 2.25V?
-3
Is the P.D across a wire with no resistance always zero?

3
Understanding Electrical Engineering with Analogies
0
Voltage vs current vs resistance - did I understand them right?
2
How to calculate the resistance measured between probes in water
7
Does voltage require a circuit?
2
Current across a wire with zero potential difference
0
voltage across low resistance and short circuit