Do you have to put a voltage across a PV cell for it to work? 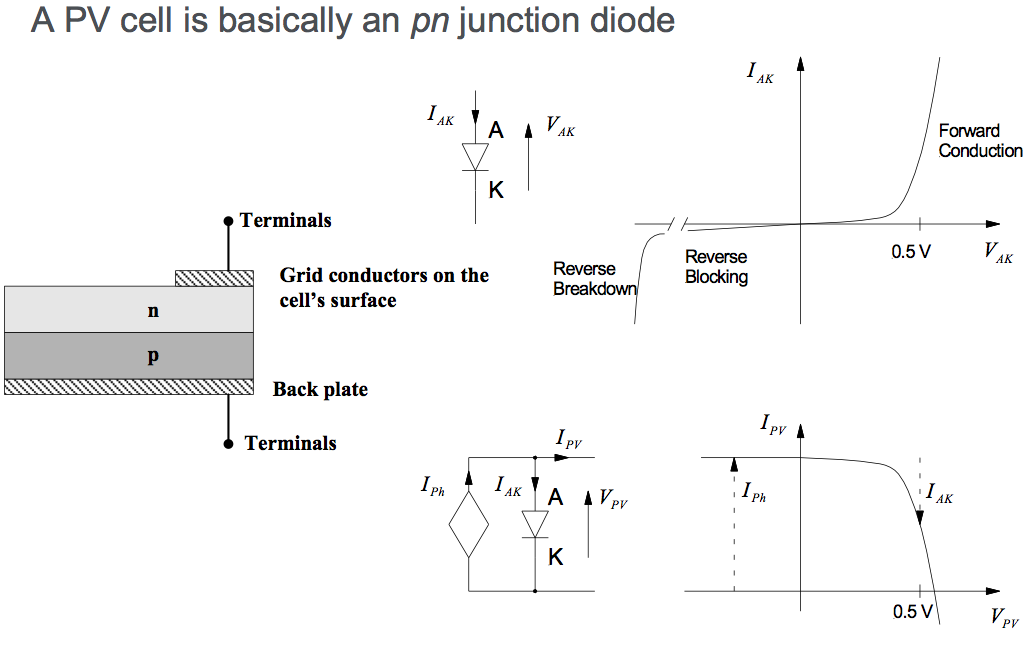 I'm trying to figure out how exactly it works.

Am I correct in saying that; You apply a voltage across the PV cell using an external voltage source (which would require it's own independent power?) and the PV cell provides current(using energy from sunlight ofcourse), the exact value of which depends on the voltage applied?

Question: If this is true, then all PV cells have external power sources? (albeit small?)

That's incorrect. You can apply a voltage to a PV, and make it a more sensitive light detector, but in this application it would be called a photodiode, in photoconductive mode. If your goal is converting light energy to electrical energy, then you don't do this, because you would be wasting power, powering your power generating device. When you don't apply a voltage to the diode, it's called photovoltaic mode.

Based on my elementary understanding of how these devices work, when a photon smacks into the P-N junction, it can knock the charge carriers around enough to separate them a bit and generate an electron-hole pair. Note this hasn't made any new electric charge; it's just separated some of the existing charge a bit. If this photon had enough energy, and it happened in the right place in the P-N junction, then the separation is far enough that the electron gets sucked into the P side, and the hole gets sucked into the N side.

That is, the attraction of these now separated charge carriers to their respective oppositely-doped semiconductor regions is greater than their attraction to each other.

The resulting charge separation results in a voltage across the terminals sufficient to drive some current. Now you have a power source.

It sounds like the voltage you are talking about is not a voltage applied to the cell, but the voltage that is related to the current produced by the cell, and the impedance of the load connected to it. If the PV cell is connected to an open circuit, its output voltage will be at a maximum (somewhere around 0.6V) and current will be zero. If the PV cell is shorted, then voltage is zero, and current is at a maximum.

Wikipedia has this image of the I-V curve for a PV cell, with the point of maximum power represented by the black line going though the knee of the curves. It will, of course, depend on the particular type and quality of the cell in use: 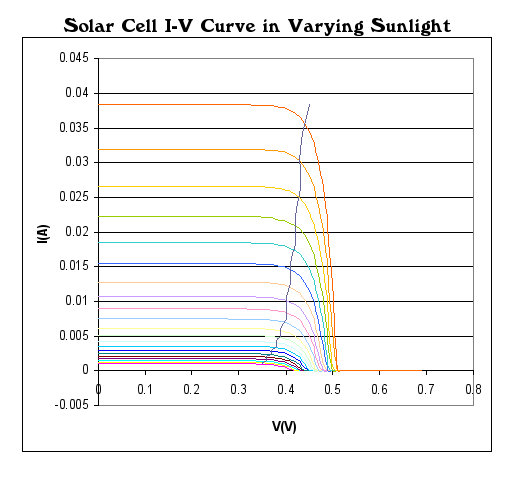 Since the output power is the product of current and voltage, at both these extremes there is no output power. Somewhere between these two extremes, there is a load resistance that will result in maximizing the product of current and voltage, where you will extract the maximum power from the voltage at a given illumination. The load resistance is optimal for power transfer when it is equal to the source resistance. This is the maximum power transfer theorem.

Wikipedia has a bit more.

Not the answer you're looking for? Browse other questions tagged voltage solar-cell current-source photodiode energy-harvesting or ask your own question.

1
How to switch power supply between two sensors
0
Help connecting solar cells to be 12 V
3
Photodiode - Modes of Operation, Currents and Voltages
0
Using solar cells to power a USB device
0
Use solar cell to power and communicate with chip in IR
0
Instrumentation Amplifier - is it possible to have an output signal inverted, with respect to the supply voltage?
1
Some questions about the CN3722 solar charging IC and its MPPT setting
0
Solar cell understanding of current vs applied voltage
1
Differential pair biasing by current sources