How do you “shrink” electronic components, such as transistors, resistors and diodes?

I realize that these components have been shrinking in size. How is this process done? Should all electrical engineers know this?

Semiconductors are fabricated using process technologies. The invention of these technologies has led the shrinking transistor sizes that have so greatly benefited the electronics industry. They have been shrinking so fast that the rate has actually been exponential, following Moore's law since their invention. In 1970, manufacturing processes reached the 10 µm node. In 2013, we are moving below 22 nm. At over 450 times smaller, you can see that you can do so much more with a chip than you could in 1970 with the same size. 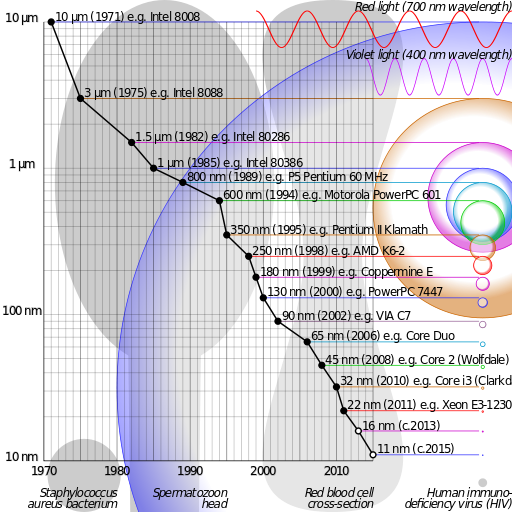 But what is process technology? Put simply, a process is a lot like a recipe. Many steps are performed to process a silicon wafer until individual packaged circuits are the result. Many mature processes are more than 100 steps. The silicon process has been an enormously valuable research topic and there are many resources to start learning. When a process technology is advanced, allowing smaller feature sizes, we say that process is shrunk. That is the actual word that process scientists and engineers use. When a process is shrunk there is usually at least some advancement in the photolithography stage, allowing smaller details to be patterned. But many steps may be affected by a process shrink since it is such a complicated process.

Who needs to know? Surprisingly, few people need to understand process technology, and most electrical engineers can remain largely uninformed about it without it affecting their careers. ASIC developers and researchers who design devices to be fabricated must understand the design rules imposed by the process, but don't necessarily need to know the details of manufacturing, although this knowledge certainly gives them an edge. Of course, the process engineers must have detailed understanding, and the process researchers must have more detailed understanding still.

Whats next? Moore's law is unsustainable for silicon processes. We are already approaching the limits of silicon because of physical limitations. Its possible that quantum computing will allow us to continue making computing smaller and more efficient. In the other direction, researchers are finding new uses for silicon: micro- and nano- electromechanical systems MEMS/NEMS. These devices open up applications that are impossible with electronics alone, and give credence to predictions of fantastic scifi-like ideas such as nanobots.

No, all engineers do not need to how electronic parts are shrunken since they aren't, and many types of engineering disciplines have little to do with electronics parts anyway.

For electrical engineers it is useful to have some idea about the semiconductor fabrication process, but there is no particular reason to know the details, unless of course you deal with semiconductor fab processes directly. If you design chips, then a bit more familiarity with the processes is a good idea.

Transistors and diodes are already pretty tiny. The ones you see are in (relatively) huge packages so they can be easily handled.

Integrated circuits consist of many (sometimes a great many) transistors and diodes made on a single piece of silicon, complete with all necessary interconnections, again placed in relatively large packages, with connection points spaced around the edges so that the package can be soldered to a PC board.

Unless you are designing or manufacturing integrated circuits, I don't think detailed knowledge of the process is of importance to the average engineer or technician.

If you question is related on historical progress of semiconductors - Many scientist and engineers was involved in development of modern semiconductors and that is very long and complicate story. For today electrical engineer is not essential to know whole history. There are specific fields where engineers are directly involved in low level technological process.. for example designing and making integrated circuits.

If you think on designing process - in development engineers use prototypes which are often looking very differently from end product. Sometimes they using bigger packages (if available) , debugging tools and circuits.. In final product all that unnecessary parts of circuit are removed, bigger packages are substituted by smaller(witch are usually more suitable for pick and place assembly) http://www.youtube.com/watch?v=nyh9u-t7yvQ

Not the answer you're looking for? Browse other questions tagged components manufacturing or ask your own question.

13
Why are rare earth metals important for electronics?
13
How to search for a component?
17
How are vias made commercially?
5
How to deal with unused components in pick-and-place file?