I'm currently working with a MAX1771 chip, the design can maintain a stable voltage up to around 15kOhm and is as follows: 12V to 300V DC-DC Boost : Disregard NMOS and DIDODE Value 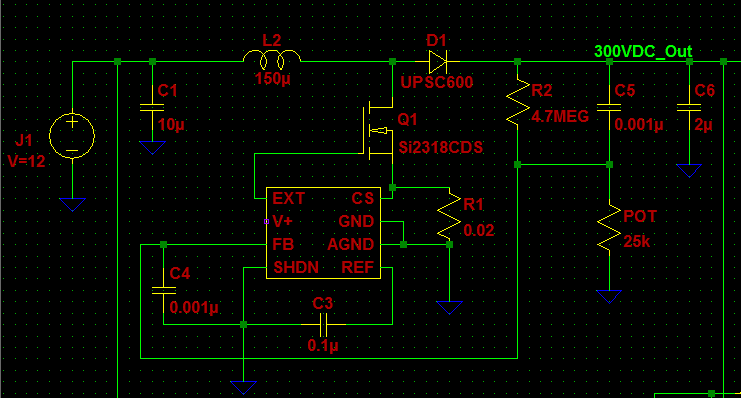 The inductor currently being used is a SRN1060-151M, unfourtanately it has a peak current of 1.25A and a saturation current of 1.8A. My guess is that the low saturation and peak current are causing problems with lower loads. I'm rather inexperienced with actually ordering proper parts and mostly ended up getting parts that fit the initial specs (matched values and picked low DC-resistance).

Can anyone recommend an affordable inductor on DigiKey that can get the job done? Or changes to the circuit that may assist in making the 300V with 9kOhm load possible?

What are the joules per second - this can be calculated now.

Your circuit cannot deliver a power greater than 8.42W and if I took losses and only 90% energy transfer it looks more like 7.5W.

You want 300V across 9kohm and that is an output power of 10W - you don't just want an inductor that doesn't saturate you want a lower value inductor. Why? A lower value inductor will attain a higher current and it's current squared that gives you the energy to push to the output.

This would be my recommendation - try 100uH and if it's still a little bit light on power (due to inefficiences) try a better FET with less-than the present 0.7ohm on resistance. Bear in mind it's really tricky to estimate how much energy stored in the inductor can be thrown across to the output so the inductor may indeed have to be lower that 100uH and I feel you are starting push the chip to its limitations and you may need to reconsider a chip upgrade.

Not the answer you're looking for? Browse other questions tagged power-supply switch-mode-power-supply inductor boost or ask your own question.