Using an NPN vs a PNP transistor

Is the following circuit electrically sound? My recollection is that the right way to do it is to use a PNP transistor on the high side and an NPN transistor on the low side. Will it work if they are both NPNs? What differences in performance are there? 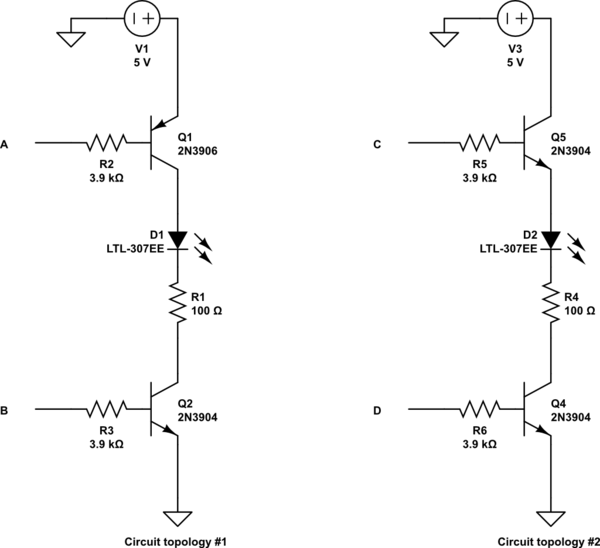 A, B, C, and D are 0 - 5V logic signals from a microcontroller. Obviously the truth table of the two circuits is a little different:

Something feels inappropriate to me about Circuit Topology #2 though, do you agree? Can you explain why? or why not? When is it absolutely necessary to use a PNP transistor rather than an NPN transistor?

Remove R5 and you will have what you describe. The configuration of Q5 is called common collector or emitter follower. Essentially, the voltage at the emitter is the voltage at the base minus 0.6V, but the emitter current can be much more than the base current, because the gain of the transistor will draw more current from the collector. Thus, it's a current amplifier.

Remember, the base-emitter junction is a diode. So, the emitter will be about 0.6V below the base if you forward bias it. With R5 removed, you can pull the emitter up to \$V_{cc} - 0.6V\$. With R5 present, you won't get it as high, since some voltage will be dropped when current flows in R5.

Since there are things that will limit the current in the emitter leg of Q5, you don't need R5 to limit the base current, which isn't true of Q2 or Q4, which have their emitters shorted to ground, or Q1, with its emitter shorted to \$V_{cc}\$.

See Why would one drive LEDs with a common emitter?

The last subtle difference is that in circuit 1, Q1 enters saturation, which will charge the base-emitter capacitance. When you then turn it off, this capacitance has to discharge before Q1 really goes off, adding a bit of delay from when your MCU output goes low to when the diode gets switched off by Q1. Q5 never enters saturation, because the emitter voltage is brought up to just the point where the transistor enters saturation, but not more. So, no turn-off delay. The delay is very short, and probably not significant until you are switching at least 50kHz.

Not the answer you're looking for? Browse other questions tagged bjt npn pnp or ask your own question.

55
Why would one drive LEDs with a common emitter?
2
Shift Register turning on Transistor for LED Cluster

9
Can I use a PNP Transistor with an Electret Microphone to get an non-inverting output for my Arduino?
0
Driving one LED from audio signal only with pnp transistor
1
24V proximitiy switch, NPN transistor, Arduino interrupt input
3
NPN vs PNP at H bridges
0
Need help understanding PNP,NPN dual transistor
0
NPN driving PNP, Diode from NPN Base to PNP Collector?
1
PNP wont turn off
1
Water level indicator with PNP transistor
1
Need help understanding PNP Base into NPN Collecter circuit for LED Array
4
Understanding a PNP/NPN LED schematic