What is 'load' in percentage?

Aircraft Airbus 320 has two 110/220v 400 hz 90 kva generators, run by two engines. There is an electronic display in the aircraft that also shows the parameters of the electrical system. One of the parameters is 'load'. Shown in percentage for both the generators separately. It's value is about 26% most of the time. Can anyone please explain to me what this load is? Thanks in advance

There is an upper limit to the amount of power each generator can supply. That upper limit is 90 kVA.

At any given time, the amount of power needed to operate the aircraft systems will vary depending on which systems are active. For example, pumping fuel between tanks presumably uses electrical power and increases the load on the generators.

The amount being used can be expressed as a percentage which gives you an idea of how much reserve capacity the generator has available to power new loads. 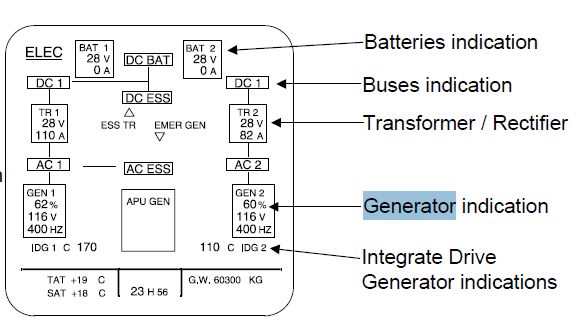 † Apparently, on the A320, a failed generator is replaced by the 90 kVA Auxilliary Power Unit (APU) if that is available. Only if the APU is not available is the load transferred to the remaining main generator. In the latter case there is automatic galley load shedding - I think that means the PAX get cold meals :-(