Small displacement measurement of a conducting beam with Neodymium magnets

I relies the displacement is very small and with up to a decent frequency. 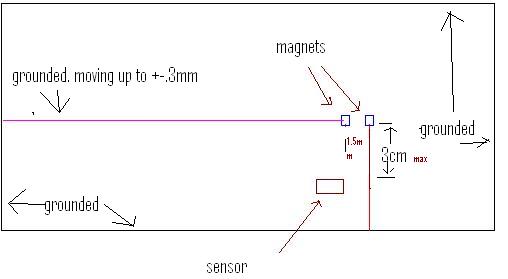 Small displacement needs to be measured of around +-.3mm Sensor can be up to 3cm away (min 1mm) from the stationary point of the displacement. But there is a second margent not moving 1.5mm away from the first. Frequency of change between the max and min could be as high as 400Hz and displacement could be as low as +-0.05mm at times.

The sensor has to be of little effect on the system as possible although a small effect can be compensated for. System should be non contact to the moving base.

One idea that was suggested was a hall effect sensor. However such a large gauss with a small displacement and the other magnet nearby with such a large offset makes me think this idea is possibly not going to work although I could be wrong. The surface for sensing is the size of the magnet if using hall effect or inductance or a maximum of around 8.5mm x 15mm

Another two options suggested where a capacitive sensor as the moving part is grounded and conducting however there is also ground all around so good shielding would have to be implemented or some form of optical sensor probably based on intensity with fiber wires for the sending and receiving light using some form of modulation and filtering to keep costs down.

I am open to any other suggestions or where someone might know a good sensor suitable, circuit diagram or informational website. I know this system is a lot to ask.

If the displacement oscillates at a sinusoidal waveform the output should reflect this and be analog if possible. if there is a phase shift that shift would have to be known and frequency would need to remain the same but the amplitude does not have to accurately represent the total displacement.

Thanks for any ideas or suggestions

This is a good idea. You can do very precise measurements with lasers, measuring phase differences to get distance. This is sometimes done with the laser wavelength itself to get micron resolution; for larger resolution and range, you modulate the beam to a specific wavelength.
I'm not sure I understand the application entirely, but it seems like you will be measuring two different points at the same time, each with a different range. For a certain range, I would choose a wavelength at least 4x that -- this sets a maximum modulation frequency. For example, c/(4x6cm)=1.25GHz for the end of the beam. (You can use a much lower frequency, too). Resolution has a theoretical minimum set by the wavelength as well, but will be practically set by your detection setup. The idea is to compare the reflected phase with a reference.

Here's how Brad did it to pick up minute sound vibrations on surfaces far away -- a laser spy device: http://www.lucidscience.com/pro-laser%20spy%20device-1.aspx

Not the answer you're looking for? Browse other questions tagged sensor electromagnetism or ask your own question.

5
Magnetic Field Sensor?
4
Ways to build a speedometer for a bike or skateboard
1
Looking for boundary sensor
3
Increasing the surface area of an electro magnet
0
Multiple hall effect sensors in proximity
2
Hall effect device for circa 1 tesla gaussmeter
0
magnetic hall effect sensor
1
Can Static Electricity change the voltage reference of a PCB?
0
How can I test a Hall effect sensor at a given distance?