I have a circuit that is driving 3 x LED rings and an Arduino/ATmega @ 5v through a standard 5v regulator.

The total supply feed is 11.5v @ 1amp, and is a buck/boost regulated supply.

Given the rings are being supplied at a constant value from the buck/boost regulator upstream, do I need to add additional individual LED drivers such as the NUD4001 to further regulate the power feed to each ring?

The circuit works and does not overheat or cause any visual issues with PwM without the NUD4001's but I would like to confirm that this is right/wrong or good./bad practice.

I do not want to add additional components to the circuit if I do not need to.

I think I understand your circuit - you have a regulated 11.5V and from this you regulate to 5V for the ATmega. Your LEDs are connected in series strings with the top LED's anode connected to 11.5V. The bottom LED in the series string is shorted to ground via a 2N7000 mosfet?

Somewhere in the string of LEDs, 0.5V is "lost" and I'm presuming you have a series resistor to govern the maximum current through?

If not, this is the only thing you should consider fitting - it'll protect the LEDs: - 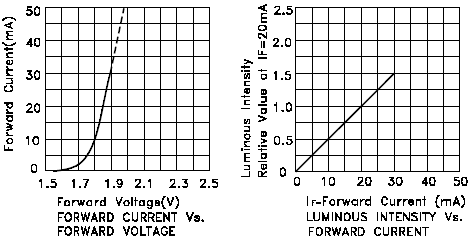 The graph is for a typical LED but all LEDs have the same saort of characteristic - note the graph on the left - the LED doesn't start conducting until the voltage across if (Froward voltage) reaches about 1.6V and from there up to 2V it can consume anywhere between 0mA and 50mA. The graph extends rapidly upwards and there is a danger that without some form of current limit you may draw too much current and destroy a LED.

You may get away with it given that you have many LEDs in series BUT if you have 63 and only 3 strings, you must have LEDs in parallel/series arrangements. Maybe you can post a link to the type of LED you are using because the ones in the graph I have shown have a forward resistance of about 3 ohms (constant slope part of the left graph) and if you have 6 series entities of parallel LEDs that's a total resistance of about 18 ohms which, given your circuit details is probably going to be ok but only for "normal" LEDs.

Not the answer you're looking for? Browse other questions tagged led atmega driver boost buck or ask your own question.