I built a ZVS flyback driver a couple months ago, and it worked great and amazed people with the arcs it managed to create. I used 2 IRFP250 MOSFETs and the results were great. One day I was wanting even bigger arcs, and I combined two 12 volt batteries and a 12 volt car jump starter, for 36 volts and the arcs were giant. They worked for a while until the inductor started to get hot. The driver still worked (even with the hot inductor) until I turned it off and back on, when I had to replace the MOSFETs. The arcs stopped oscillating and it seemed like all of the current from the batteries was going to the inductor. The inductor got red hot and melted. I just recently replaced the MOSFETs and everything worked just like before. I started out at 12 volts, and no problem, but when I added 24 volts, the same thing happened as when I added 36 volts previously. The inductor got very, very hot, and when I switched it off and back on, the same thing happened. The MOSFETs are 30 amps, 200 volts! so I don't know why they would have failed with just two 12 volt batteries.

How can I prevent this from happening again and what possibly could have gone wrong? (I really don't think I was drawing 30 amps, but I guess if they failed, it did.)

I want to identify my problem because I don't think it is good to keep replacing my MOSFETs just for them to burn out again! 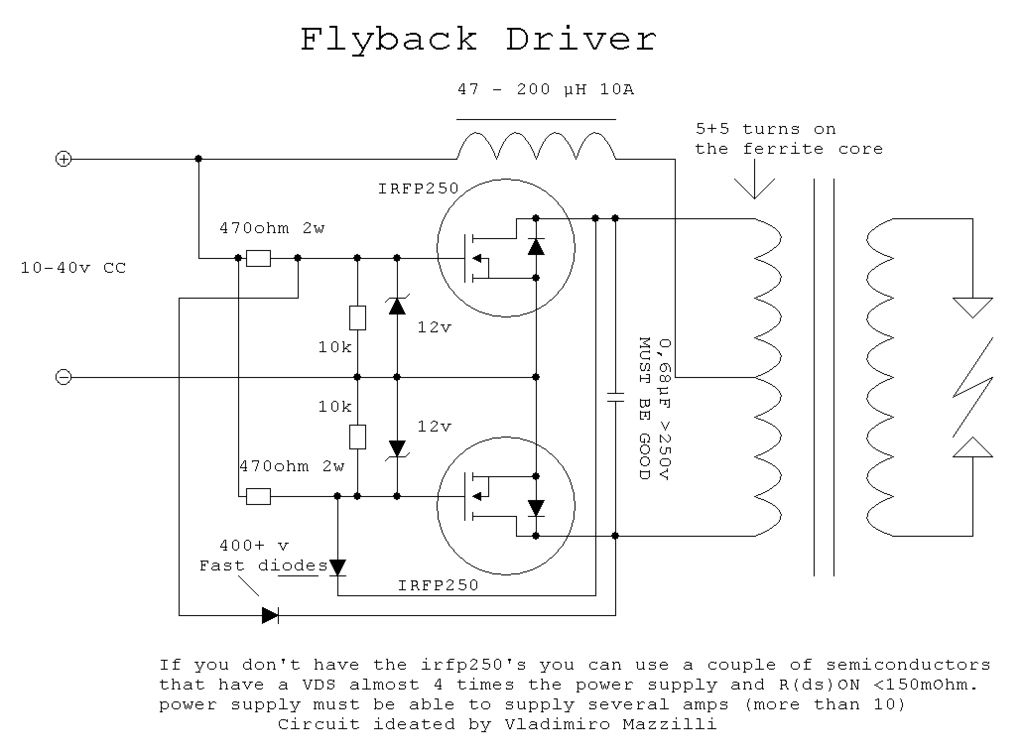 MOSFETs are sensitive to voltages exceeding their ratings.

When you switch off the device, the inductive coil is very likely to have generated an inductive back-EMF of voltage high enough to damage the MOSFETs. After all, the electrical energy stored in an inductor has to get out of somewhere - When you power off, the energy finds some path or the other to discharge itself, and resultant voltages can be considerably higher than the original voltage across the inductor.

A generic fix for inductor back-EMF woes is to apply a reversed diode across the coil, or in this case, possibly across the MOSFETs. Do not depend on the body diode of the MOSFETs to provide a discharge path, as body diodes rarely have suitable characteristics to serve as a high energy discharge path.

There are lots of ways that your circuit can blow mosfets. The ZVS Royer started life with BJTs many decades ago. MOSFETs are better than BJTs these days but you need to do a bit more work to get some reliability. First you should run the circuit up on a current limited source like a lab supply or failing that a large idiot resistor. This will stop things blowing allowing further work. Now scope each Drain Source of each fet and you should see a half wave rectified sinewave. The drain waveforms should be the same if your coil has proper symmetry. There should be no parasitics. If there are use gate resistors to improve this. Parasitics can and do mean increased power dissipation and increased voltage peaks. The expected peak drain voltage under steady state operation is Pi * the supply volts. Measure your current draw under this steady state operation and calcutate the total power that is being wasted. Most of the wasted power goes into the transformer and the mosfets. Now measure your drain current with a CT or other fast means. Study the way the mosfet current interacts on the scope with the Drain Source voltage and you should observe Switching at low volts meaning low switching losses.If you get poor switching then redesign the drive circuit. The drive circuit I use is more complex but means no heatsinks needed on the FETs. Now you can substitute the idiot resistor for a buck convertor that has current limiting and preferably soft start.

I used a S trap switchmode current source using descrete components but you can choose a chip if it is easier for you. This caper of pre bucking the ZVS ROYER is not new, in fact linear technology have a chip that does this for old flouro LCD backlights.

Not the answer you're looking for? Browse other questions tagged mosfet high-voltage failure zvs or ask your own question.