Why do we need an isolation transformer to connect an oscilloscope?

My professor always insists that I provide power to an oscilloscope thorough an isolation transformer. What is the necessity of this? What is the risk if I don't connect it? 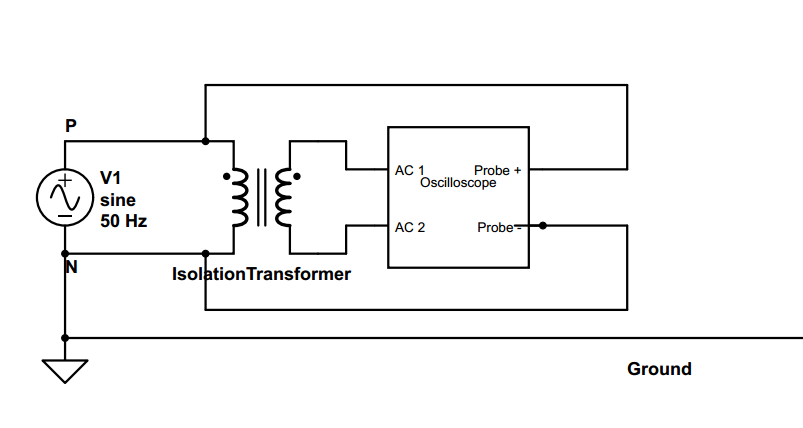 You should never float a scope with an isolation transformer! This is reckless and dangerous advice from your professor, and he/she needs a reality check.

The accepted procedure for doing work that requires isolation is to ISOLATE THE UNIT UNDER TEST, NOT THE TEST EQUIPMENT.

If you cannot float the unit under test, use an isolated differential probe to do your measurements, and keep both the UUT and scope earthed. No measurement is worth the safety risk.

A battery-operated scope may seem like a good idea in this circumstance, but only if it has dedicated isolated inputs. A battery-operated ordinary scope with non-isolated inputs will still suffer the problem of the exposed metal floating up to whatever potential you connect the ground to. That's why all of the manuals for the battery operated scopes clearly say "This scope must always be earthed, even if you're running off the battery" - if you choose to ignore this, it's at your own risk. A scope with dedicated isolated inputs should still be earthed as a good practice. It's essentially the equivalent of using external isolated differential probes with an ordinary scope.

I work full-time in power electronics and have tens of thousands of dollars of lab equipment at my bench. If anyone is caught floating their scope, the float is immediately corrected by the test engineering team, the means of float is seized (most often this is a line cord with the ground prong removed) - disciplinary action is a possibility. Numerous senior/principal engineers have fried their PCs and their entire set of GPIB-connected bench instruments by trying to float the test equipment and forgetting about the GPIB interface. (No one has died yet - thankfully)

The alligator clip on the scope probe: 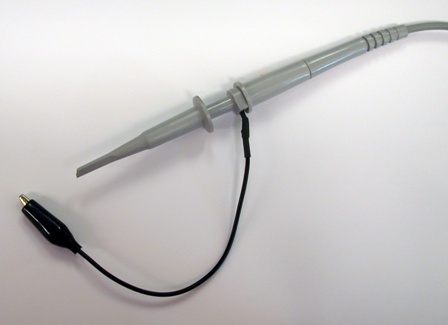 is connected, through the power cord, to Earth. If you clip it to something that isn't at Earth potential, you get a large current, and things go boom.

That said, an isolation transformer on the scope isn't the way to go. There's a reason the engineers built the scope like this, and it has to do with safety and noise performance. It's better to isolate the device under test, and let the scope work as designed.

Remember, that ground clip is also connected to the metal chassis of the scope. It's likely you will touch it. It's also likely you are touching Earth. So consider these circuits: 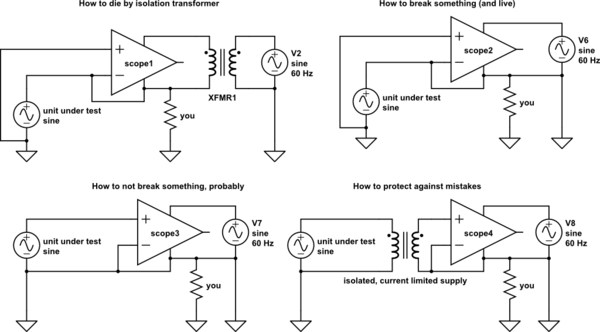 scope1 allows dangerous current from the unit under test (UUT) to flow through you to ground. You die.

scope2 may be damaged, or may just blow a fuse, since the UUT has been accidentally shorted to ground. But, you will live, because you are a much higher impedance to ground than the ground pin on the cord. This is why it's called a safety ground.

If you just avoid clipping the ground lead to anything that's not at Earth potential (scope3), then nothing goes boom. Just be sure to not make any mistakes!

If you want to protect you, the UUT, and the scope against mistakes, then the right thing to use is an isolated, current-limited supply (scope4). Between the isolation and the safety ground, it will be harder (but not impossible) to kill yourself. If you do mistakenly short something out, the current limiting kicks in and probably avoids permanent damage to anything.

Both approaches are possible to apply (with different pro and contra). It is sometimes difficult to arrange an isolation transformer for a device under test, when the device consumes lots of power (power electronics driving a big motor XY kW). In such cases it might make sense to isolate the oscilloscope, since the isolation transformer can be very small and cheap.

While what you say is possible, you and your prof are not seeing all of the other damgers involved with that setup. The others are not wrong and they have told you how to do it a safer way in general as a habit if possible. As a general practice, your prof is incorrect or maybe you are misunderstanding your prof....most likely but cannot be proven.

I think there are two quite safe alternatives:

(1) Isolate the Oscilloscope AND the Device Under Test (DUT).

If the DUT is isolated, when you connect your oscilloscope lead somewhere, that position becomes ground referenced. Then it can be dangerous to touch the DUT chassis and other points on the device.

If both are isolated, then there is a much safer situation. In that case, you can connect your 'scope ground lead anywhere without danger, without also providing a ground path to the DUT. So the DUT chassis would be safer, just beware of handling both devices at the same time (for example, touching both chassis of 'scope and DUT could be dangerous, if the ground lead of the scope isn't put at DUT ground/chassis as well).

(2) Use a battery powered oscilloscope with an isolated body/chassis

I believe those newer battery powered devices can be safe, they have a plastic body (if well built, with a good isolation), allowing you to probe your circuit freely, as long as you don't exceed the isolation rating of your device.

I think newer devices and oscilloscopes generally use plastic bodies which I believe improves their safety (although the precautions should still apply).

I was taught the same thing... When it comes to AC/RF current, isolate the source from the O-Scope. WHY?

A scope is to:

OK - I need to finish my coffee. More input please.

The professor seems to be right, sometimes during circuit testing if it supposed to happen that we have to analyse the input mains waveforms and the system has 2pin power cord, then the phase and neutral orientation may change, since dso has its BNC ground connected to earthing the change in 2 pin cord may connect circuit neutral/phase used for reference of probe to earthing, leadind short circuit

Not the answer you're looking for? Browse other questions tagged power-supply transformer oscilloscope or ask your own question.