What is the foam pad on the bottom of a large, through-hole capacitor for?

Large, through-hole capacitors (typically electrolytic) sometimes have a foam pad on the bottom like the one in this picture: 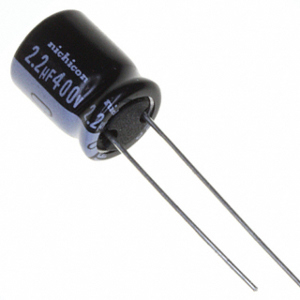 What is the pad for?

That doesn't necessarily look like a foam pad from the picture (textured plastic?), have you poked at a few at your bench?

Having said that, the picture does show a 400 V cap with (w.a.g.) 5 mm lead spacing, so something to isolate it as you suggest might be in order.

In general, that piece under the capacitor is some rubber or soft plastic that allows the capacitor to vent the hydrogen it produces during operation. The rubber is usually covered by a plastic spacer so the bottom of the can can't sit tight against the board forming a seal.

Water in the electrolyte plays a big role. It increases conductivity thereby reducing the capacitor’s resistance, but it reduces the boiling point so it interferes with high temperature performance, and it reduces shelf life. A few percent of water is necessary because the electrolyte maintains the integrity of the aluminum oxide dielectric. When leakage current flows, water is broken into hydrogen and oxygen by hydrolysis, and the oxygen is bonded to the anode foil to heal leakage sites by growing more oxide. The hydrogen escapes by passing through the capacitor’s rubber seal.

The capacitor element is sealed into a can. While most cans are aluminum, phenolic cans are often used for motor-start capacitors. In order to release the hydrogen the seal is not hermetic and it is usually a pressure closure made by rolling the can edge into a rubber gasket, a rubber end-plug or into rubber laminated to a phenolic board. In small capacitors molded phenolic resin or polyphenylene sulfide may replace the rubber. Too tight a seal causes pressure build up, and too loose a seal shortens the life by permitting drying out, loss of electrolyte.

It is a rubber seal. It keeps the magic smoke in. Or at least the electrolyte. 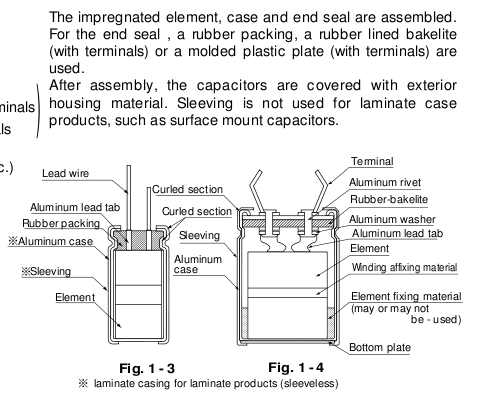 Vishay tech data gives a better view of the seal: 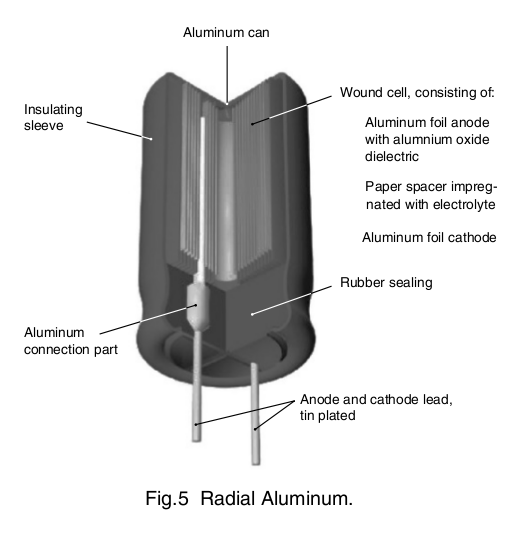 I'd say for electrical insulation. It could easily arc since it's rated for 400v.

2
What happens to a polarity sensitive capacitor when you feed a square wave through it?
1
Suitable replacement for this big aluminium can capacitor?
4
Can a single, large multilayer ceramic capacitor replace the classic electrolytic + ceramic decoupling capacitor arrangement?
1
What capacitor types perfom best for large-value signal path applications?
13
What is the “CV” unit for leakage current in a capacitor datasheet?
1
Tips for designing 4 pad feedthrough capacitor in Altium Designer
2
Use of very large bulk capacitor for microcontroller power stability
1
What capacitor to get for relay coil?
5
Electrolytics and PCB Routing
0
Snap in capacitor in place of through hole