What is a pull up and pull down?

Can some one explain this terminology please I think I understand it but not completely sure.

If I am completely wrong then let me know!

It's the other way around.

Pull up is where you place a resistor between a signal and +V, pull down is pulling it to ground. 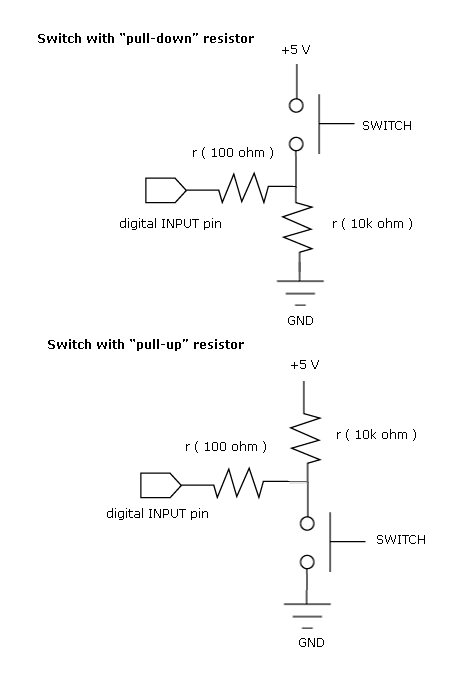 Here, you can see that when the switch is open, in the pullup scenario the input pin will read high, but for pull down it will read low.

The basic function of a pull-up or pull-down resistor is to insure that given no other input, a circuit assumes a default value. But one pulls the line high, the other pulls it low.

Common uses are where an input to some component requires one of two voltage states to operate reliably but you are driving the input with some component that can only drive a signal in one way. Maybe the input is the gate of a FET, maybe an input to a microcontroller or a logic gate. Maybe the output is coming from an open drain fet or an open collector BJT transistor or maybe you have a situation where many outputs got diode or'ed.

The deal is that the input can deal with the driven signal from the output but when that signal is no longer present, there's a good chance that you now have a situation where the input sees high impedance. Under these circumstances, what signal the input "sees" is unpredictable. It could pick up noise from nearby electrical cables. It could pick up static electricty discharges from nearby etc. The input may end up switching states at undesirable frequencies. Of course usually you don't want the input to be able to "switch" on its own at all. So you pull the signal up or down when the opposite driven signal is idle.

The value of a pull resistor depends on your power budget, the max current/voltage/power the output components can deliver and what voltage/current the input requires to see a steady state that is opposite to the "driven" output state.

Lots of valid points here, examples of what pull-ups are, and certainly you can work out which way is up from them, but I'm going to aim this at the 'explain the terminology' aspect..

The mnemonic that makes sense (to me anyway) is that the resistor is used to 'pull' the pin to some established voltage; so usually one speaks of pulling 'up' toward the positive supply voltage, or pulling 'down' toward ground or a negative supply voltage.

I think your confusion stems from what you're pulling. You may see the resistor between V++ and the output either as pulling down from V++, or pulling up from output/input. The thing is that it is no use pulling V++; it will remain V++ (as long as you don't exaggerate the pull). Likewise you can't pull ground up; it's ground, it's your reference!
Hence the explanation is that you pull the output/input. Towards V++ is up, towards ground is down.

Not the answer you're looking for? Browse other questions tagged resistors terminology or ask your own question.

0
2.2K Resistors on Microchip Data Input Lines
3
Why do we need a resistor here?
4
Do I need to use a resistor with a microswitch to limit current for an Arduino Uno?
8
DSLR Hotshoe wiring to Arduino
4
Don't understand how these resistors operate in this circuit
2
Purpose of a Pull-Down resistor
2
What is the purpose of the resistors in this schematic?
2
Why does a pull down resistor eliminate floating input

19
Pull Down Resistors
31
What makes a pull-up/down resistor strong or weak?
43
When to use pull-down vs. pull-up resistors
1
What are the mechanisms at work in a pull-up or pull-down resistor circuits with a push-buttons and a GPIO?
1
Pull down/pull up resistor for 5v input
0
Pre-biased transistor, what is infinite resistance pull-down resistor
2
TJA1048 - Can someone check if my calculation is good about pull-up and pull--down