What are the ways to allow/prevent a car engine from starting up?

Assume that I do not want to replace a factory Engine Control Unit (ECU) with a custom ECU.

I can think of possibly connecting the car battery through a relay and turning the relay on/off. Any other good ways to do it?

There are many ways to achieve this. Some are better than others in certain situations, and some only work on certain cars. I'll try to describe a few.

There are other ways but pretty much all of them would fall under these categories if you want to be able to control it electronically. Don't forget that the car can always just be towed. Once again, I'm assuming you are thinking of theft prevention.

Rather than intercept the battery cable feed, you could intercept the signal from the key to the ignition relays/contacters. That way you won't loose your radio station programming due to battery being disconnected.

When I say intercept I mean break the connection, insert a relay or transistor and drive it with some circuit that allows\disallows engine start, run.

Whatever you're doing, try to make it so the engine won't stop in the middle of driving. This safety message has been brought to you by.....

Another possibility is a cut off switch for the fuel pump. No fuel, engine will turn over but not start. This can be a hidden toggle switch or a separate key switch.

I second Jim's idea: switch off fuel pump/injector(s). If the motive is theft prevention this has a major advantage: when you try to start the engine the starter motor will still run, but the main engine doesn't. The thief may think there's something wrong with the engine and leave the car alone (car thieves don't really want to interrupt their criminal business to repair a car engine).
OTOH, if nothing happens, like when the main contact is switched off, they may have a clue of what the protection is about, and quickly "fix" it.

It depends on tech level of the car and how difficult for you want the system to be and WHY YOU WANT TO PREVENT THE CAR FROM STARTING. The why part is very important because if you just want the car to not start, the ignition key/switch is the most obvious way and has been in use for a really long time. If you want to prevent someone form stealing your car, you'd need to know what would the thief be capable of and how difficult you want the system to be for day to day use. I mean, you could always take the battery with you, but that would add a few minutes of setup time every time you want to start the car, plus problems related with carrying the battery.

Some cars have electrical central locks which will not work if the battery is disconnected. It could also cause problems with internal clocks, microcontroller settings, radio settings and so on.

If you want to stop the car from starting, maybe it wouldn't be a bad idea to put some sort of switch at the starter itself. This way, the rest of the car's electronics could still work. To me this looks like the safest place because, as far as I can see, attempting to start a car with disconnected starter will cause the least amount of damage. Please note that the last car I worked on was a Volkswagen Golf Mk1 and that was quite a while ago, so I'm probably out of date.

Another idea would be to analyze how car's starting procedure goes. Some cars have a key controlled rotary switch which is used to start the starter. If you add another switch in series with the starter switch, you could prevent car from starting.

Some other cars I've seen have a start button which is directly connected to a microcontroller, and they would be a bit more difficult to intercept.

I'd just add a toggle switch that's normally open, cutting either the park/neutral (automatic) or clutch (manual) switch. You're dealing with very minimal current, and the car is designed to not start without said signal; you're not placing it in some uncommon failure mode.

Granted, if someone troubleshoots this it would be one of the first things to check, but determining where the problem is and how to fix it can take a long time depending on how you wire it up.

A method I've seen a few times is shorting the spark line coming into the distributor, as others have already mentioned.

My grandfather made up a special wire for the distributor center lead. It looked just like a real wire with the right plugs on the ends, but had no conductor in the middle. When he had to leave the car for long periods of time someplace he didn't trust, he'd swap in his fake wire and hide the real one. The engine will turn but not start. A quick or even not so quick look under the hood won't reveal the problem. It would take far more diagnostic effort than a thief wants to spend to get the car working.

The method doesn't need to be unbeatable, only enough trouble to make someone else's car a easier mark.

Probably late to answer this question; I'll do so anyhow.

In my old car ( no fuel injection, had a distributor+carburettor ), what I did was to pull a wire from the distributor earth into a switch with the other connection going to the chassis. Keeping the switch open prevented the ignition circuit from closing, and the vehicle wouldn't start.

The easiest thing to do would be to just pull the starter relay. This won't effect anything on the car. You could also pull the fuel pump relay but the car might still start and drive a short distance on the remaining fuel pressure in the line. That actually could be a good thing if you are trying to stop someone from driving the car and would like to catch them if they do attempt to do so. The car will be a short distance from the original location and it will be immobile so the perpetrator will be unable to return the car to original location thus being caught. Also if you have a ford product you could find where the "crash detecting" magnetic fuel pump cutoff switch is and just "trip" the switch. Depending on the year it's easier than others.

My experience with cars is that modifying the security system is often the easiest way to disable (or enable/hot wire) a car. For example, my old car, a Passat, had the security system in a box mounted on the left of the driver's foot well, so it was very easily accessible. You could just open this box, connect two terminals and the car would start. Below is a diagram showing the security module in a Volvo 850: 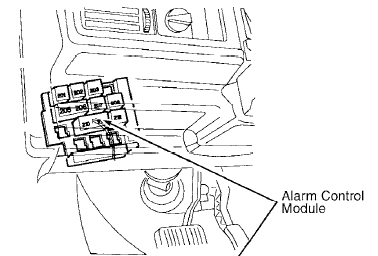 As you can see it is very easily accessible right under the dash on the driver's side. You can easily hot wire the car through this module OR you can prevent it from starting, your choice.

The security module has the ignition routed through it and is designed to connect or cut off the ignition as needed, so it is already configured to do exactly what you want: control the starting of the car. By modifying the module you can add whatever functionality you need.

Not the answer you're looking for? Browse other questions tagged automotive or ask your own question.

1
Automotive Logic Signal Switching and ESD/transient susceptibility
4
Automotive electrical system. How does everything work?
1
A circuit to fade-in and -out LEDs (DRLs) only when the car engine is running?
2
Need help controlling a relay using a dimming light
3
Can I use a capacitor to power an Arduino for 5 minutes after the power has been cut?
1
Using a Small Signal Relay in Automotive Application
0
TWO 3.5mm AUX sockets to ONE 3.5 AUX plug - Car Audio Application