I am trying to build a keyboard sewn into a shirt and since there doesn't seem to be any suitable flat (and thin) pressure switches I will need to DIY one. Here is my idea for a pressure plate viewed from the side:

My biggest worry is durability since I know that making a good, tough switch is hard. Obviously a hall effect sensor would be the best choice but I don't think it would work on such a small scale.

Another approach is to use conductive fabric like this: http://www.instructables.com/id/Three-Fabric-Buttons/step4/Making-holes/

Would that be more durable compared to my idea?

Or are there any better ways to solve this problem? At first I looked into piezo transducers but they can only detect taps and I need to know if the user is holding down a button.

Consider a capacitive touch sensing solution instead of a mechanical contact switch if that meets the requirements:

For discrete "keys", pieces of single-sided PCB cut to the right shape and size serve well as capacitive electrodes. For sensing, either use a suitable microcontroller which supports capacitive sensing, or use a touch sensor controller such as the Atmel QTouch series.

An illustration of how this works, from the Atmel QTouch pages: 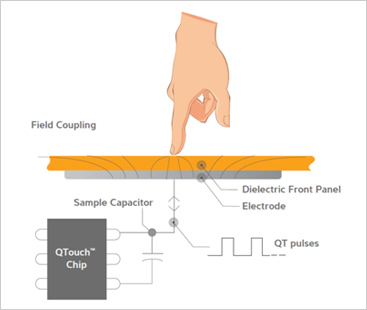 The PCB material, either glass epoxy (FR4) or paper phenolic, serves as the dielectric in the diagram above. The single-sided copper layer would be on the inside of the wearable.

From the question, it appears that a large number of "keys" may be needed. In such case, discrete capacitive touch sensing (one pin per electrode) may be sub-optimal. A matrix touch sensor IC would work better, e.g. Atmel's QMatrix. From the Atmel site:

QMatrix uses a pair of sensing electrodes for each channel. One is an emitting electrode into which a charge consisting of logic pulses is driven in burst mode. The other is a receive electrode that couples to the emitter via the overlying panel dielectric. When a finger touches the panel the field coupling is reduced, and touch is detected.

This works much like the matrix scanning technique used in conventional keyboards.

For up to 48 buttons, the Atmel QT60486 can be used: Up to 48 sense channels, with data communication via SPI and UART.

This capacitive touch approach addresses durability, safety and production concerns in one go. For best results, the exposed copper side of the electrodes could be coated with standard solder resist, or for longer life when exposed to human perspiration and friction, a suitable epoxy coating.

For a DIY approach you may want to consider going to a surplus computer store and picking up a few old computer keyboards. Most keyboards made in the recent 10 years or so are made of a matrix that works almost exactly like you describe the setup that you want to make. In the case of the computer keyboard there are three plastic layers, two with conductive traces on facing sides and one that has holes in it. The one with holes acts as a separator to keep the two conductive layers from touching. When the two outer layers are squeezed together over the holes in the separator layer the conductors touch and complete the circuit.

This assembly is very thin and may be workable for what you have in mind. It is possible to enlarge the holes of the separator sheet to allow for the contacts to work with less pressure. You can also cut the plastic pieces up to make your own switch layout but it may be difficult to attach wires to the plastic sheet traces.

1
Difference between Switch-Disconnector and Disconnecting Switch?
7
switch debouncing - would toggle switch still bounce
2
Rotary Switch terminology
1
How can I switch multiple lines using a single switch?
1
Use a momentary switch with a toggle switch