How to get started with electronics and specifically cheap microcontrollers? [closed]

I have a birthday coming up and would like to try and "get into" electronics. Now seems like the ideal time to finally get enough components to get started. However I need advise choosing what to get. I would also like to keep the cost to around £50 ($80) if at all possible.

I have coded in C before and would like to learn assembly. I have several smaller projects in mind so the microcontrollers I use would need to be £2 or less really. (I do not want to have to take the microcontroller out of the last project to make the next.) This rules out the Arduino etc. (Also that would likely be too powerful anyway.)

I have completed a GCSE in electronics. However I am still very poor at electronics and understand very little about them.

I am considering the Attiny45 for my projects as it costs only £0.50 per chip and takes a wide range of voltages; I am hoping I can simply run it off of 3 AA batteries without need for a voltage regulator. Also the Attiny range is well documented and I could easily move up to a better chip if need be. Finally it should be able to run http://www.obdev.at/products/vusb/index.html (?). Which would allow me to emulate USB 1.1 in software. I think this would be really cool.

Does the Attiny45 seem like a good choice here and are my reasons for choosing it valid?

The projects that I would like to try to make are as follows:

Any/all of the above sound like fun and I would really like to try and do at least 1 or 2 of them. I have absolutely no electronic related stuff at home. What should I get and what will I need? So far this is what I have thought of: 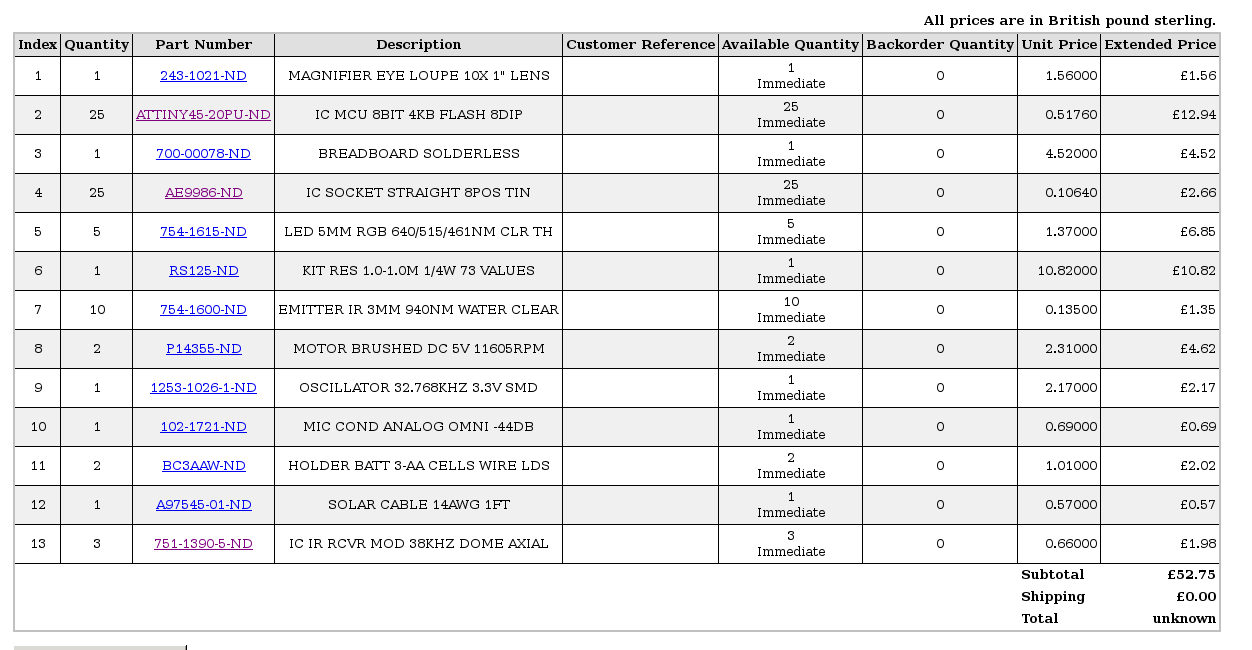 Part numbers can be looked up on the Digikey website but I can't post any more links.

I don't have a good soldering iron (I have one somewhere but I honestly don't think it can even melt the solder) and I do not have a multimeter. However together getting those will likely already come to £50. Do you think that they are essential to get started?

Thank you for reading. I really would be interested to know what you think is most important to get first when starting out and what other items I have missed from my list that I will need.

Firstly I would like to say that I'm quite happy to see someone so enthusiastic about electronics.

As for transistors, you can get plenty of general purpose transistors like the BC546 (my personal favourite) and YES you can run DC motors with transistors but small motors which you find in battery operated pencil sharpers, hand-held fans, etc as running motors will draw quite a bit of current which will make your transistor hot or even damage it.

If for instance you setup everything and things do not seem to work, you would need a multimeter. Its quite an essential tool when setting up the hardware. You do not need solder if you are using a breadboard. Breadboards can be quite expensive and you might want to go in for veroboard (or pre printed circuit board) for which you will require a soldering iron. I do not know what the prices are for tools like these in your country but if you do get a hot iron, do not save money as buying a good iron will save you money in the long run (speaking from past experience).

Let me know if I missed something

Not the answer you're looking for? Browse other questions tagged microcontroller breadboard attiny basic buying or ask your own question.

29
“Starter Kit for electronics” - What to buy?
10
How does one get started with electrical engineering?
19
What are the Best Starter Supply Kits?
10
Good Quality Breadboards?
9
Best Electronic Kits