I'm having a hard time understanding an emitter follower. What I don't understand is why there is no voltage gain but only current gain. From my understanding when the transistor is turned on, the CE acts like a piece of wire, so the Vout should be equal to V+. But no the Vout follow the Vin less 0.7V. Can anyone explain it to me?

The 0.7V drop is from the Base-Emitter junction being a PN junction (in an NPN transistor), which is the same as a diode (a silicon diode has a forward drop of ~0.7V).
A bipolar transistor is either NPN or PNP.

The reason it has current gain is that the base current turns the transistor on, allowing current from the collector (which is connected to V+) to flow to the emitter.

The reason it doesn't have voltage gain is due to the "negative feedback" effect from Re.
Let's run through an example of why the emitter stays 0.7V below Vb and does not reach V+. 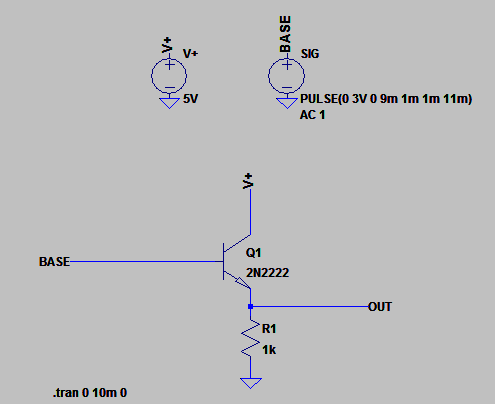 Now say we apply 3V to the base.
We know that the transistor begins to turn on when the base is ~0.7V higher than the emitter, so at this point current starts to flow from V+ into the collector and out through the emitter through Re to ground.
Now here's the important bit - when the current flows through Re a voltage appears across Re.

Now for arguments sake let's say the transistor "tries" to turn on fully and since we have a rising current flowing through Re, the voltage across Re rises also.

What happens when the voltage across Re reaches 2.3V?

Well, you should see where this is going now - the base is still at 3V. When the emitter was at 0V, the base-emitter (b-e) voltage was >0.7V and the transistor was on. Now, however, the b-e voltage is at 3V - 2.3V = 0.7V! so if the voltage across Re rises any further, the transistor would turn off. So the circuit has a natural limiting mechanism, and what happens is that it always sits at ~0.7V below the base voltage. It would not matter if the current gain is infinite, the emitter voltage cannot rise above this point without "turning itself off".

Here is a simulation of the above circuit, with the base voltage gradually ramped up from 0V to 3V: 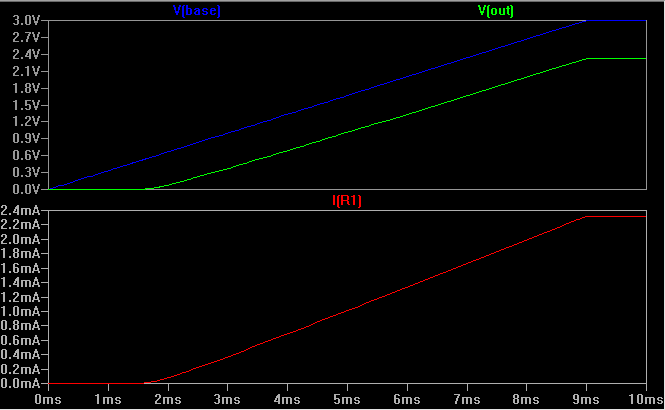 Here's another simulation with a capacitor added in to prevent the emitter voltage from rising too quickly, so we can see how the transistor turns on fully at first to charge the cap as quickly as possible, then (almost) turns off again as the cap reaches ~2.3V and only the resistor current is left as things settle: 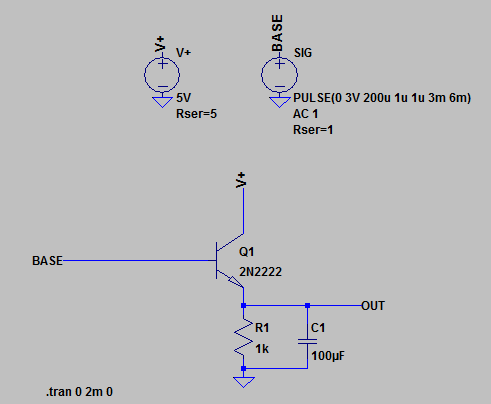 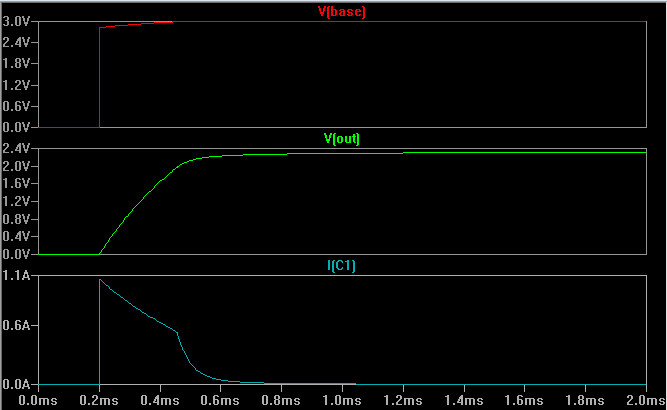