what happens if I apply a negative voltage across a zener?

I have the following circuit (just the input portion of a larger circuit):: 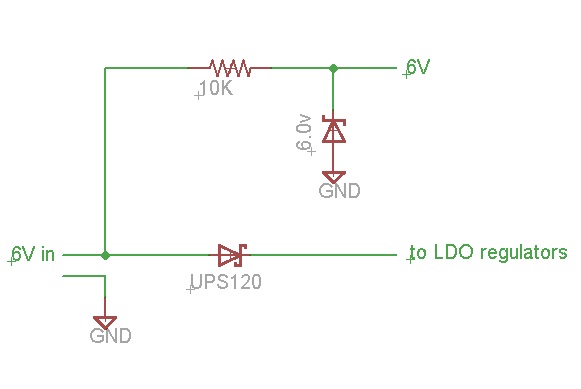 The 6V is coming from a walwart or other 6v source. The Schottky diode (UPS120) is there to guard against the input voltage coming in at the wrong polarity. The output is connected to a couple of LDO regulators, and the guaranteed maximum forward voltage (450 mv) of the UPS120 gives me enough headroom for the regulators.

However I also need the full 6v for a bias voltage elsewhere in the circuit. Although the walwart I am planning on using is a switcher, my experience is the walwart may go slightly above 6v (e.g. 6.4v) under little load so I added a 6v zener to make sure my bias voltage does not go above 6v.

What happens though if the wrong polarity is applied to the input? My regulators are protected because of the Schottky diode. But what will happen to the zener? Will it clamp to ground (ok) or go below ground (not okay)? In the latter case, how can I mitigate this?

If the input voltage goes negative, then the zener will be forward-biased, and will behave not unlike an ordinary diode. Your \$10k\Omega\$ resistor will limit the current.

The voltage across D1 will be about 0.6V. The current is given by Ohm's law:

That's not much current, so maybe it won't damage anything. You will have to decide, based on what's connected.

If that's not acceptable, then you could another diode to prevent all reverse current. But you say that the additional voltage drop would not be acceptable. You can eliminate this voltage drop by using a P-channel MOSFET instead:

When V1 is first applied, the body diode inherent in the MOSFET conducts, but soon this voltage appears at the load, and thus also between the source and gate of M1. This turns M1, shorting out the diode, and the only voltage drop you get here is due to the resistance of \$R_{DS(on)}\$ of the MOSFET, which will be very small.

If V1 is reversed, then the body diode will not conduct, and M1 will not be turned on, and there will be no reverse current (except the very small leakage through M1).

It will go below ground one diode drop but the 10k resistor will limit the current into the zener and hence into the circuit that may be damaged so, the only question you have to ask is "how much current can my input take before it is damaged".

My gut feeling is that on most devices (MCUs op-amps and the like) 10k from +/- 6V is not going to damage anything but the most exotic of devices so, you are probably going to be OK.

Check your data sheet about how much current you can stuff up an input.

A Zener typically needs 5 mA to develop its Zener voltage. With a 10 kOhm resistor, that's unlikely to happen. Thus, the Zener can't do much to regulate voltage.

Similarly, if you connect a reverse voltage across the system, the Zener will conduct like a normal forward diode with some amount of forward drop -- thus the "6V" output will become something like -0.5V.

Finally, regarding your schematic, to make it prettier for people to read:

Not the answer you're looking for? Browse other questions tagged voltage zener negative or ask your own question.