I want to install an AUX connection on my car navigation system. I have never done such thing before, though. I searched a bit around and a very similar installation to what I need is here on Saabworld.net. However, I don't have that cassette player but a navigation system, so the board looks different. I haven't really played around yet but I thought I'd ask some more experienced people if they see from the pictures of the board and/or the connectors whether it is obvious where to soldier the AUX input connection.

If not obvious, maybe you could give me helpful tips what I would have to look at or where/how to get the necessary information.

Edit: Thanks to a hint, the head unit might not have any audio signals at all on the board. From here you can see that the main unit is in the back of the car. Edit: From other sources, I have read that it is possible to install a telephone headset. This must be somewhere in the front of the car. Some more information about the telephone input is here. Some more about the audio system in general (but which mostly just confuses me) is here.

The communication between the different parts is via the (I)-can protocol. There is the Saablin project - a small Linux - which has reversed engineered the protocol and enables usages such as to install a line-in (by emulating the CD changer). For example, see here. A similar project is an Arduino project here. However, that might be overkill for me.

About the main unit:

I only have pictures from the outside yet as I haven't yet uninstalled and opened it. However, these pictures are already interesting. You have two cinch connectors there which look very much like a line audio input. There is also some not-connected plug with 5 pins (or so). Maybe that is for telephone and it would enable the cinch audio input somehow? 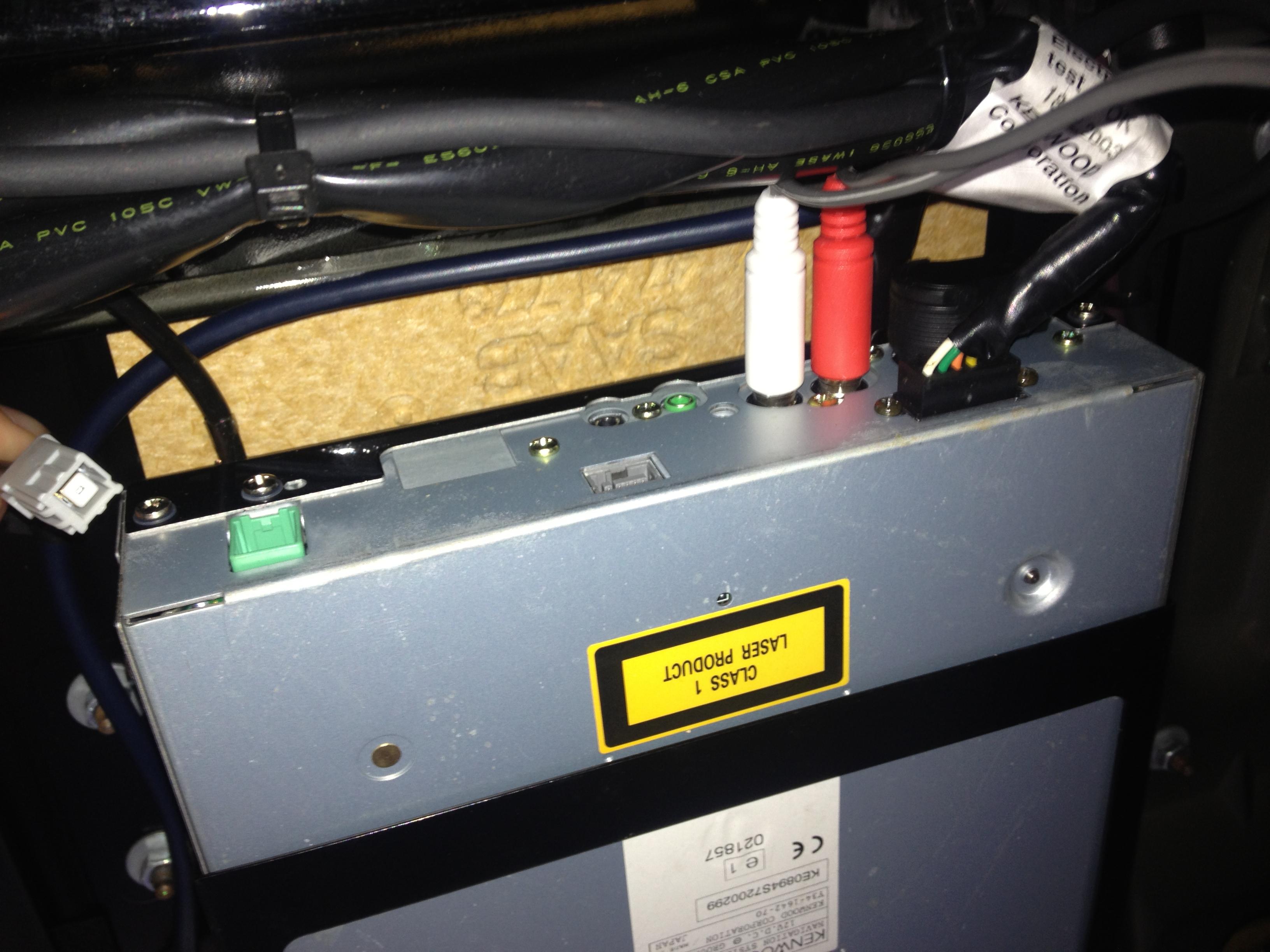 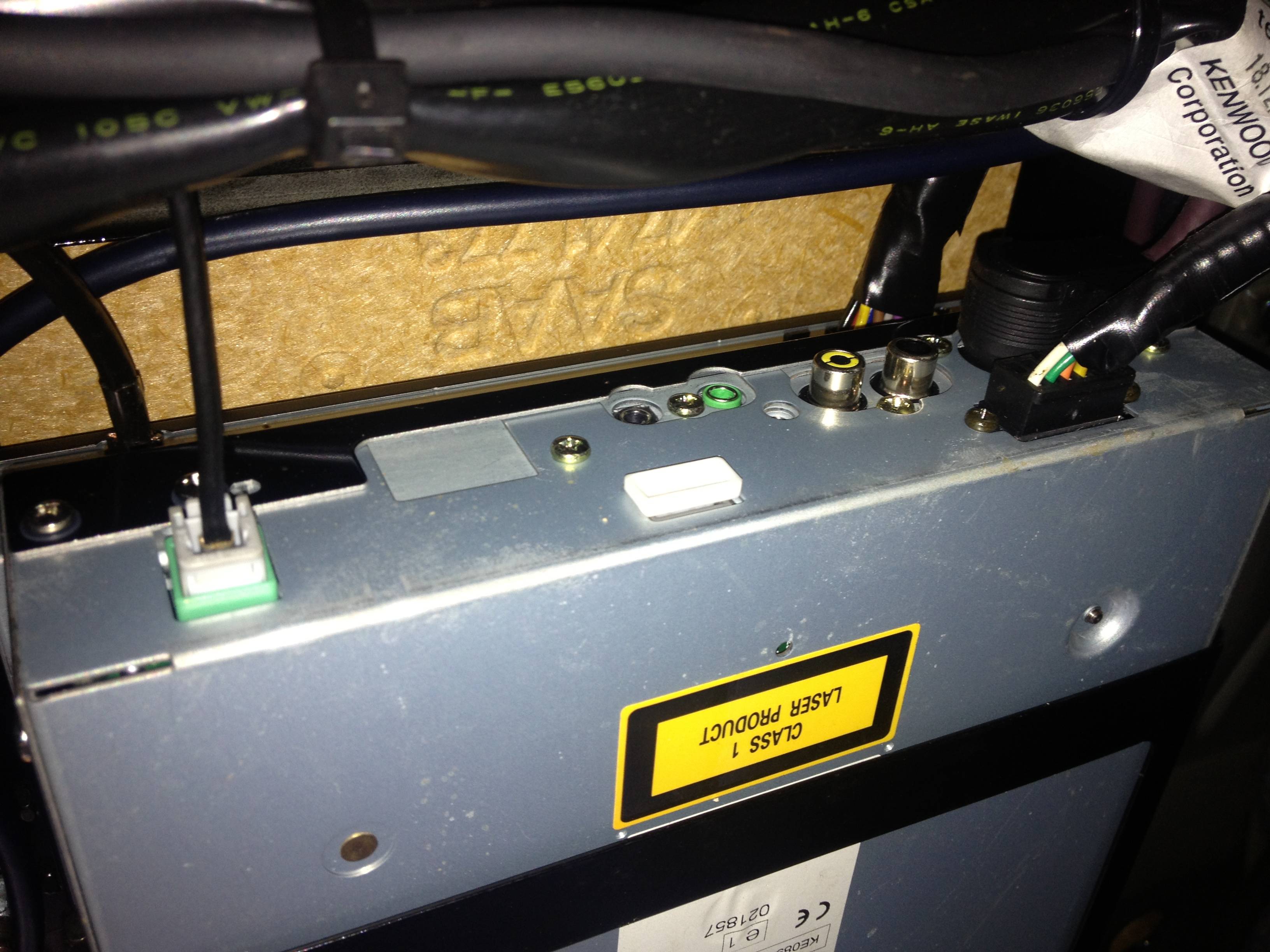 About the head unit board:

What is that CN5 connector on the board which is not plugged?

Or, what is that yellow cinch plug on the back? Edit: That is video input as it says on the back of the board.

Or, is the whole unit just digital and the digital-analog conversion is done somewhere else in an external amplifier? I think that 6-pin plug is the output. I'm not sure if that is something digital or analog.

What are (or might be) the connectors ACC, PARK, ILL, ILL-CONT, BU, REMO?

Some of the chips on the board: 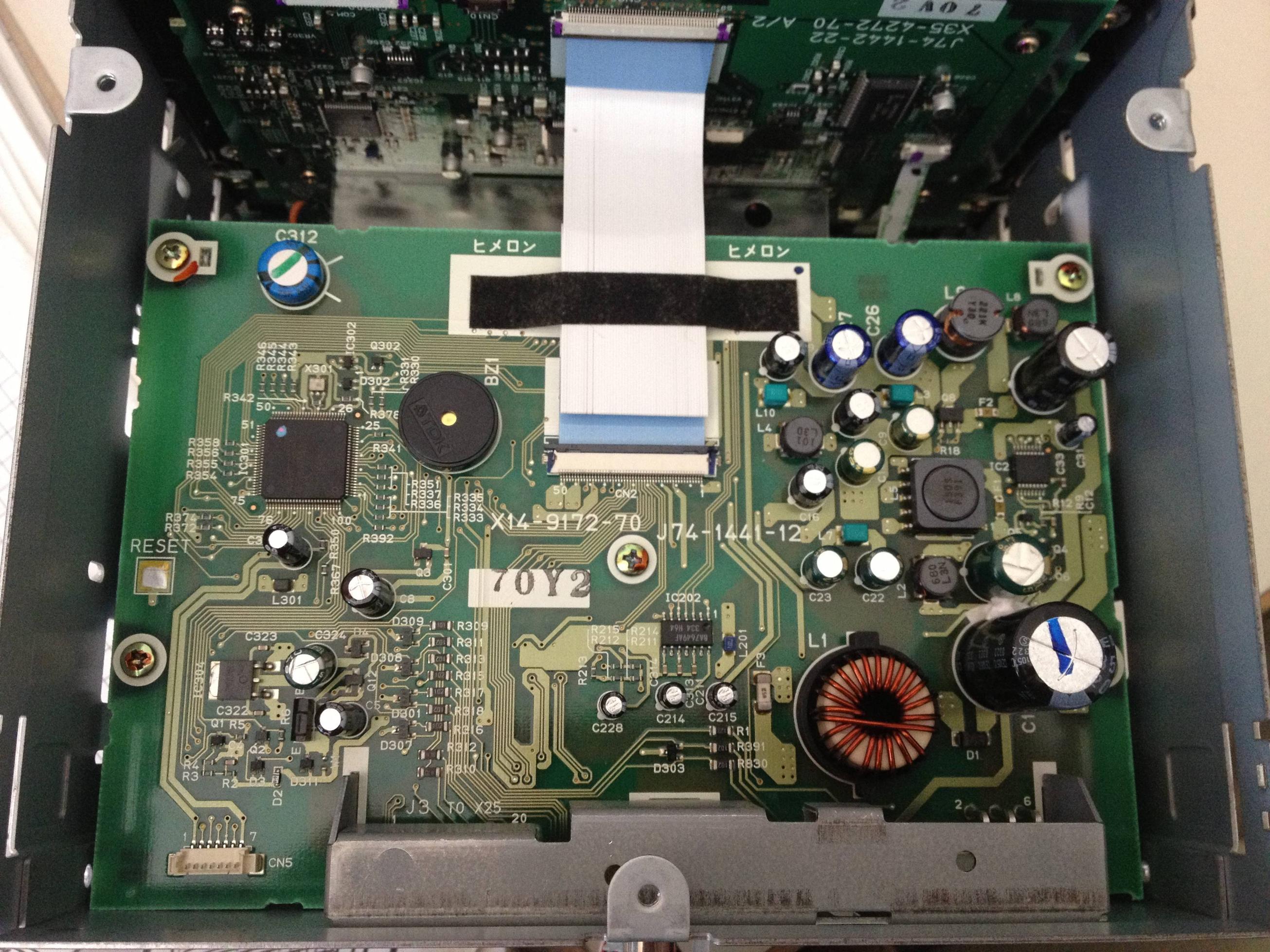 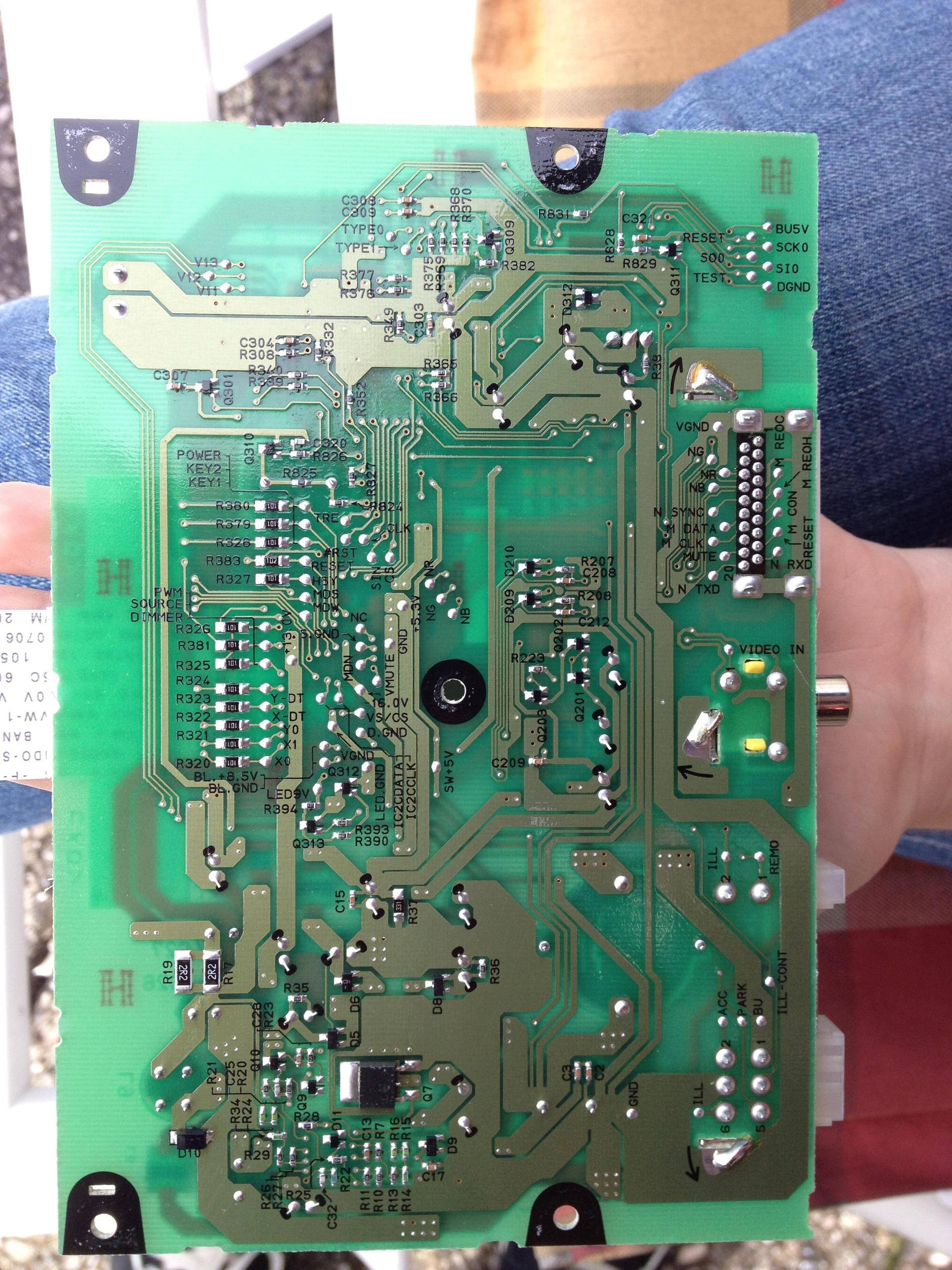 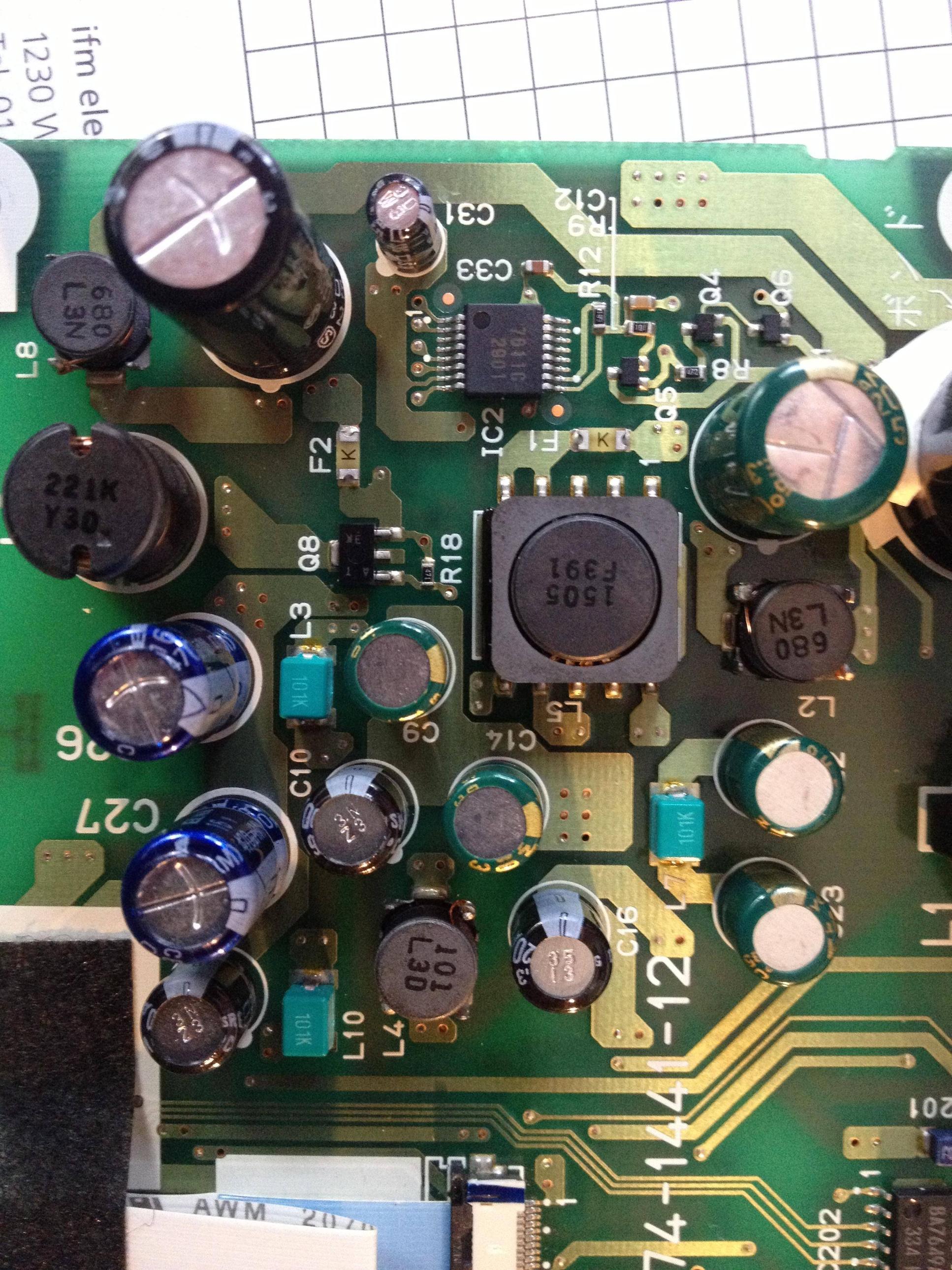 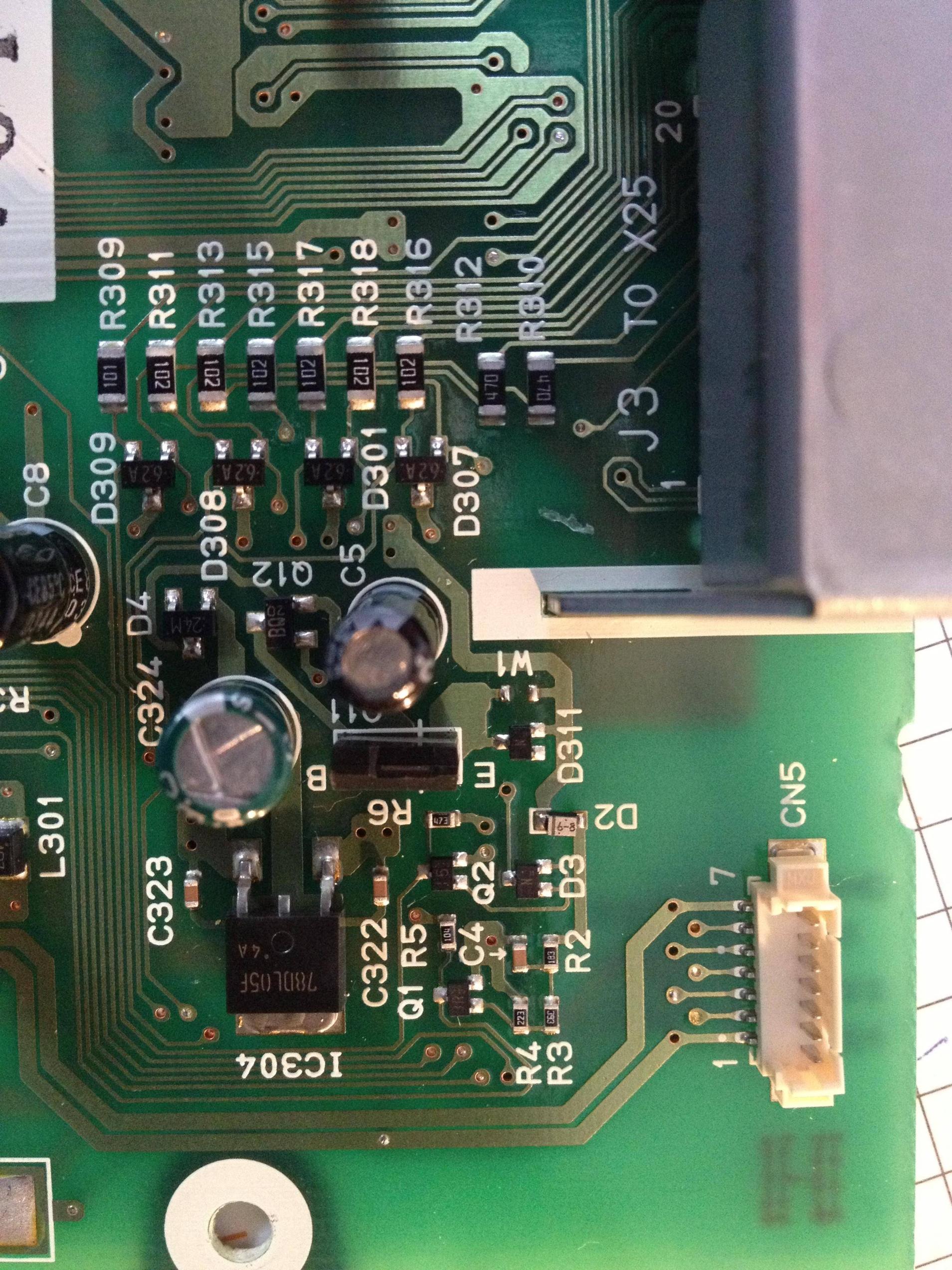 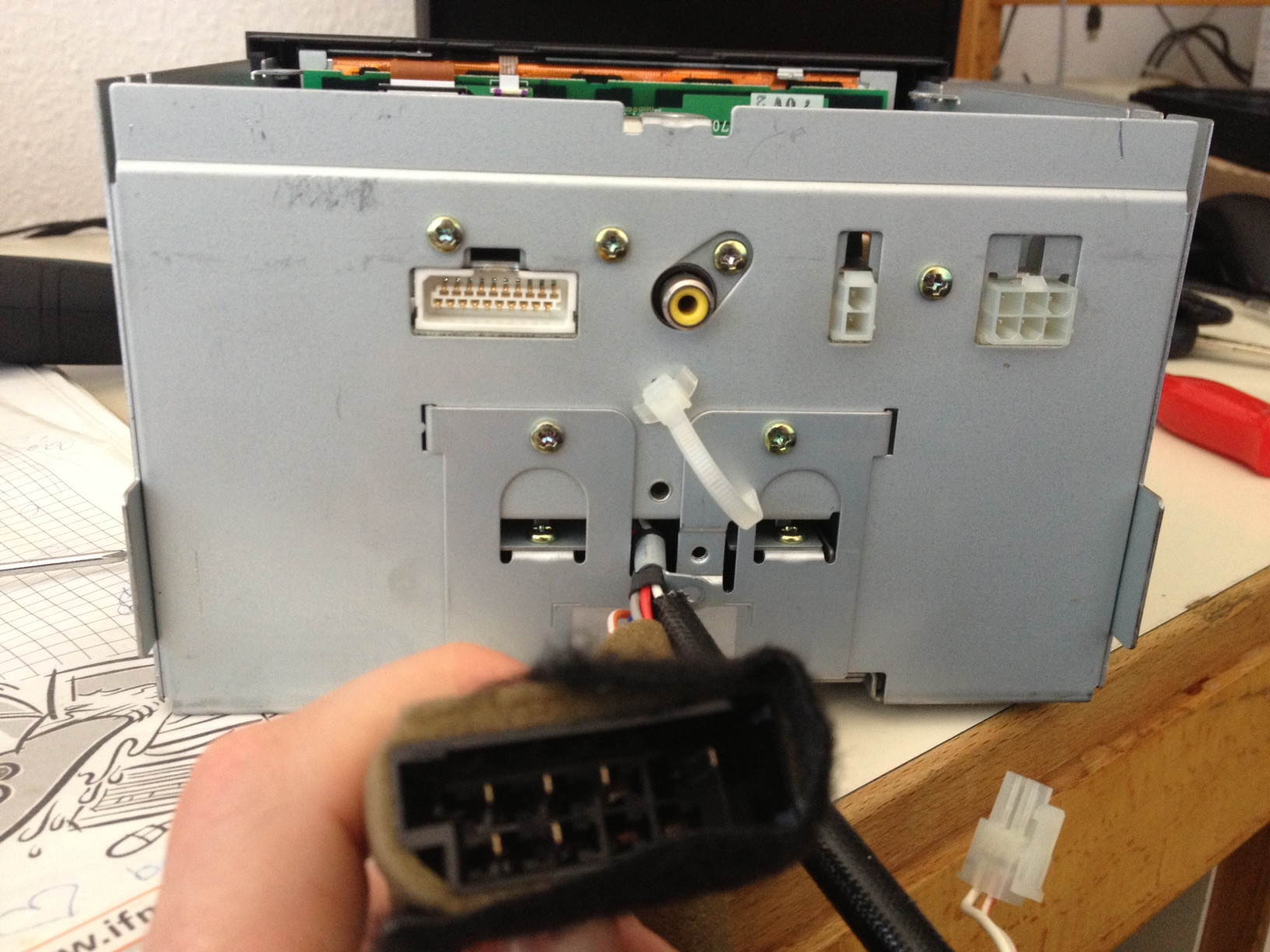 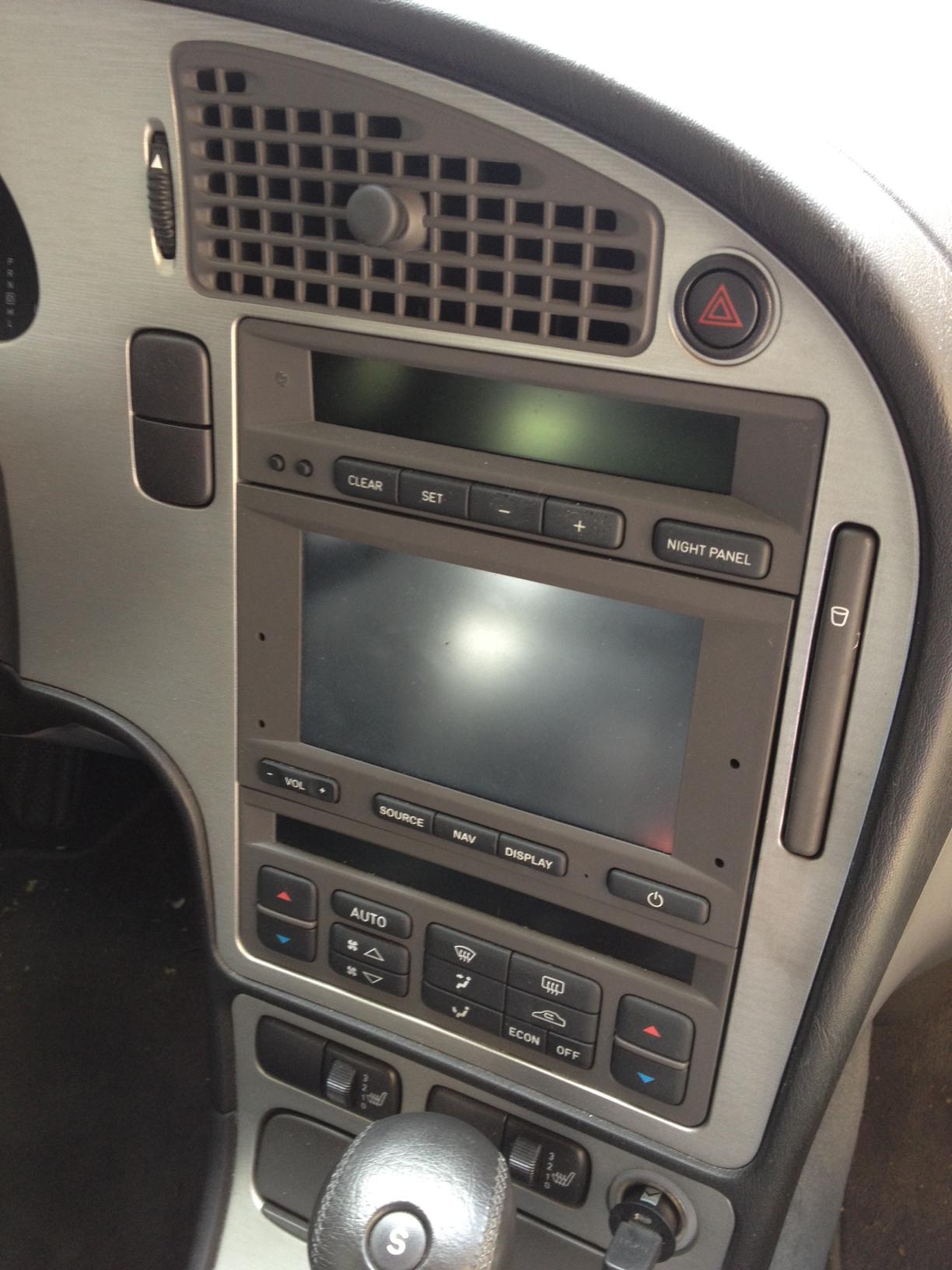 If you look at STC-700 Internal Schematic PDF (I am not vouching for the source/site) This is the actual audio/control unit of the system. The Head Unit does not do anything with the audio directly. The DV2200 is just the GPS Nav System.

The STC-700 has the RF and CD/Tape/Nav Audio sections. The above PDF has the entire board layout, block diagram (as below) and the actual schematic of the board.

It should be near the NAV system you have pictured. 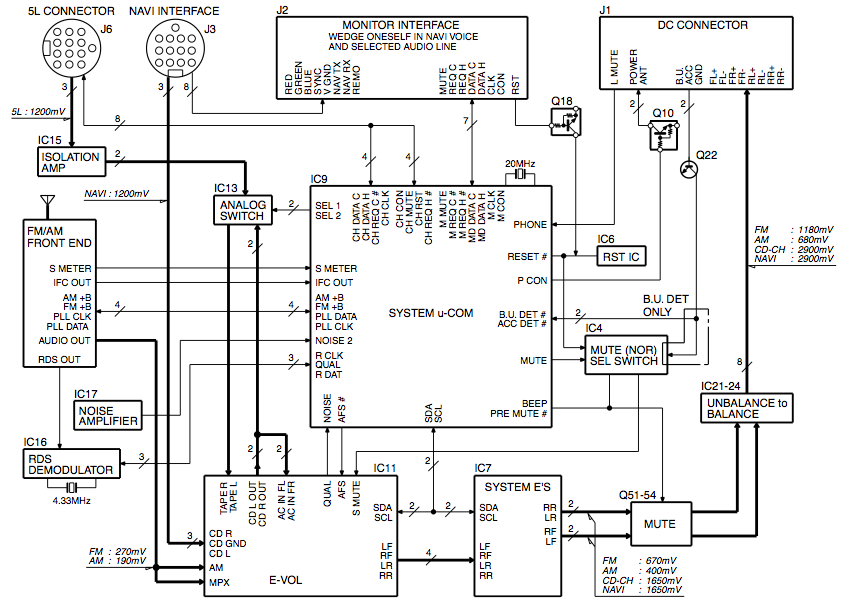 Main IC's are the IC11 (E-VOL) TDA7407 Advanced car (audio) signal processor and IC13 TC4052BFN Differential 4-Channel Multiplexer/Demultiplexer The 4052's Control Line A is tied to ground, while Line B is tied to 8V through a resistor, and connected to a transistor (DTC124EUA NPN) controlled by the Main Processor (When the transistor is active, it grounds the control line). This means audio lines X/Y0 (5L Connector/Cd Changer) and X/Y2 (CD Out 7407/Nav System) from are used, X/Y 1 and 3 are not. You could tap into that.

The weird thing is that the NAV's audio goes to the TDA7407's CD IN (buffer stage). The CD IN is both an input to the 7407's audio selection, but also tied to CD Out. This is then tied to both the AC IN RF & LF (Pre-speaker input right/left front channel), and the 4052's X/Y2. The X/Y0 is from the 5L connector, assuming a cd player. By default, unless the transistor is active, the X/Y2 is selected, which is connected to the 7407's TAPE IN L/R lines.

So one of two things could be happening. The system is set up so that the 4052 multiplexer is always used, or it's only used when the main ic knows there is a cd changer involved. For the most part, the 7407 can directly access the CD IN line which is tied to the NAV, so the multiplexer is only needed if the cd changer is present. Hell, I don't think it's needed at all, but I'm not a highly paid car stereo engineer.

IF it's the first case, you could tap into the 4052's extra input X/Y3, add a resistor and switch to Control Line A (tie it to ground through a resistor, and tie the switch to the pin and the 8v used), and once you enable it, you should hear audio when you are in Nav mode. This might cause you not to hear the nav when it is trying to speak. 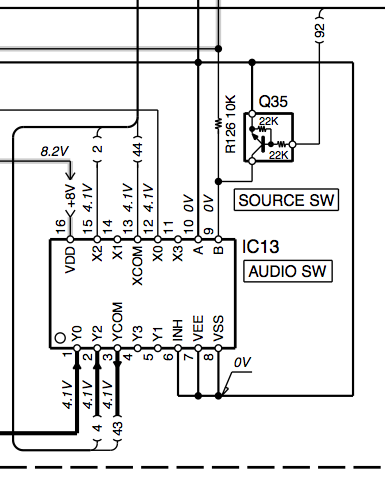 Edit: The DV2200's service manual (Full schematic and pcb) (Again, not vouching for website) shows that the back connectors are Video and Audio. The Yellow rca connector is Video Out, the Black connector is Audio Out. Same audio tied to the DIN connector on the right of the rca connectors (Pin 8 and Pin 12, R & L Audio to CD IN R/L, but both are tied together at the NAV so the same signal to both sides) 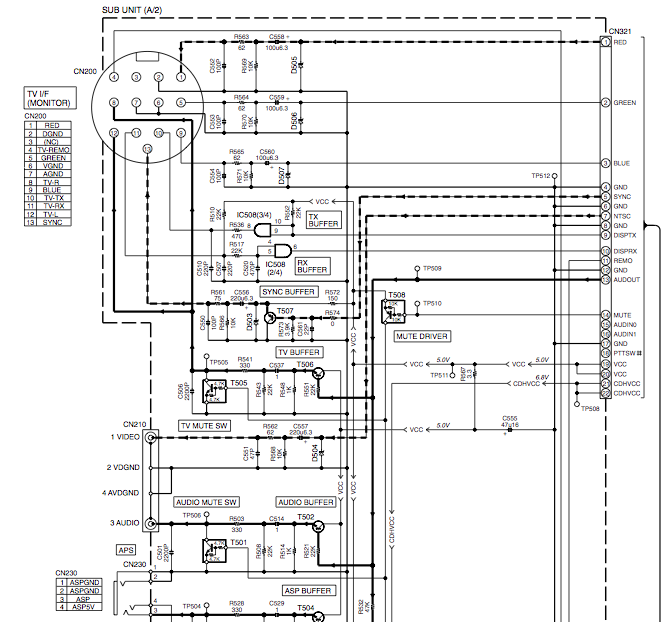 So Obviously, the White RCA cable should go to the Head Unit's Video In, but where does that Red RCA cable that you picture go to?

Does it have facility to connect a CD changer? My first thought would be to try patching Aux in through the CD changer connection.

Another option might be to look if you can get your hands on a Saab --> ISO harness adaptor and see if the pin allocation gives you any pointers.

It might just be coincidence, but there's a 20-way connector on the unit, and the ISO C (miscellaneous) connector is also 20-way. (Though I'd not blindly follow the ISO pin numbering if I tried anything with it, but I'd certainly look at it).

What are (or might be) the connectors ACC, PARK, ILL, ILL-CONT, BU, REMO?

My guesses would be:

ACC - Accessory - +12V swithced by the ignition (stage 1 / 2). PARK - parking brake (some functions - eg video - might be disabled when the parking brake is on). ILL - Illumination - lights up when the car's lights are on. ILL-CONT - (real guess this one...) illumination control (variable brightness if the car dashboard brightness can be varied). BU - Backup perhaps - constant +12V to keep the memory (eg radio stations) stored when the unit is off. REMO - (nothing immediately springs to mind on that one).

If you can find a Kenwood KCA-S210A adapter, this has AUX input and will plug directly into your system. 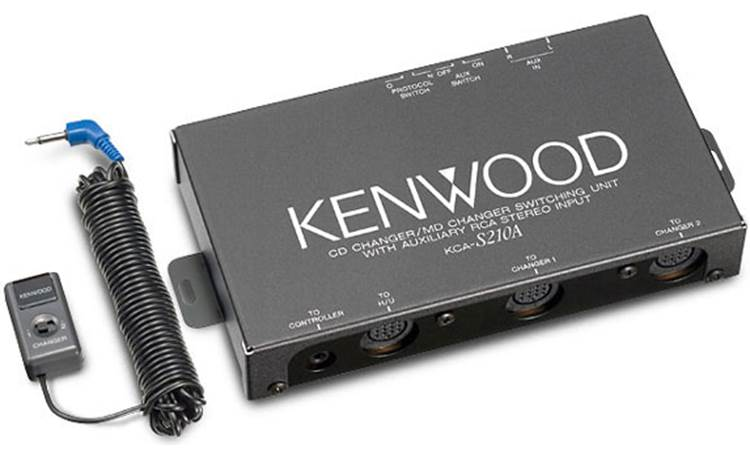 PS: Have the same system, I'm not associated with Crutchfield in any way