I am trying to build an IR system that works via the Arduino. So far, it works great. However, I want to have one IR Led on the back of my device and one in the front. However, the Arduino pin only supplies 40mA max.

Hence, when I used on IR Led, the range was still pretty decent. However, upon connecting two of the IR Leds to the same pin, it was very weak (1m range only). I was thinking that to solve this problem, I can get a cheap 7400 series AND gate. Then, I can feed the IR Line from the Arduino and split them into the two AND gates, and the AND gate will drive the IR Leds, and both will get full power (I am not sure of the rating output of a 7400 AND gate)

Is this a good idea? Any idea what a 7400 series AND gate output max current is?

While @JimDearden's answer provides a suitable approach for operating the two infrared LEDs in parallel as desired, my answer addresses the specific question asked, to resolve some possible misunderstandings that may have motivated the question:

So, in short, the 7408 AND gate is neither a viable nor a justifiable approach to solving the problem.

Why not just drive the LEDs with a transistor (NPN or MOSFET) - they have a much higher current drive capability. 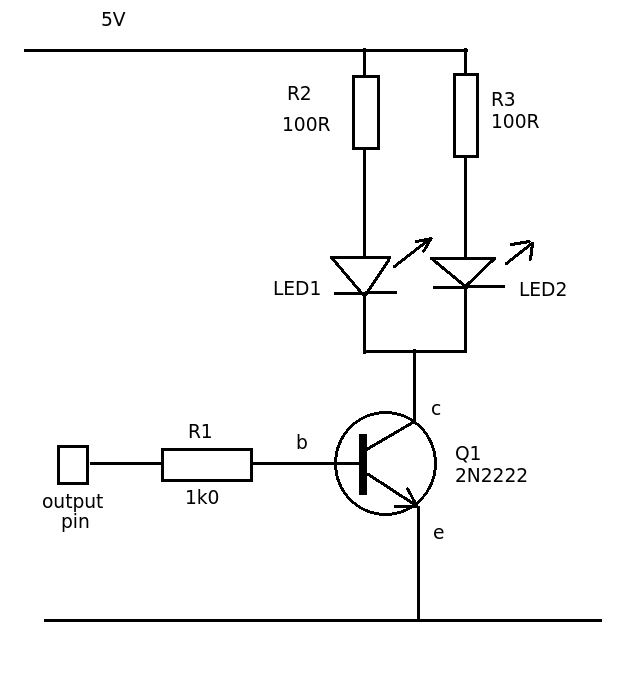 Values shown give about 70mA total (35mA per LED)

Not the answer you're looking for? Browse other questions tagged arduino digital-logic infrared or ask your own question.

3
Will my Arduino output pin at 0v handle 25 LEDs cathodes
3
How to drive high power LED and Arduino by the same power source?
1
Arduino: Common Ground Issue? Powering Buzzer, LEDs via transistor as a switch
1
Circuit to keep two LEDs on when buttons are released
1
How can I accurately estimate the power consumption of a GPS tracking device?
1
Solar/battery powered LEDs circuit - Arduino controlled
1
Controlling multiple LEDs with Arduino and TLC5940NT
1
Problem with arduino controlled constant current supply with MOSFET/NPN
0
Lamp Test circuit for LEDs with an Arduino