I'm building a simple project that consists of a 9v LED, a 5v Gas Sensor and a 3.3v micro controller. All the devices have low current draw, so I'm not really worried about hooking them up in parallel.

I was thinking that the 9v LED could be directly connected to a battery. In parallel with that I would like a 5v and 3.3v voltage regulator, where both of the voltage regulators would power the other two components.

I've looked at this thread: Power Supply Design - Multiple Voltage Regulators but got some mixed signals regarding hooking up the voltage regulators in parallel or series, and was wondering if anyone could give me a definitive answer on best practice? Additionally, I've seen some articles that encourage bypass capacitors to help smooth out the DC signal, because I'm connecting directly to a battery I can ignore that, correct?

The LED is a MegaBrite (https://www.sparkfun.com/products/10236)

and the microcontroller is an MSP430 (breadboard/launchpad version) 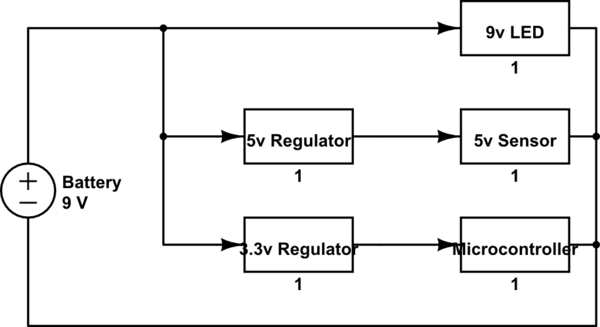 You are wasting quite a bit of power by using linear regulators to drop 9 V to 5 V and particularly to 3.3 V. There is also no need to run the LED from 9 V. There is no such thing as a "9 V LED". There are some packaged devices that contain a LED and resistor so that the whole thing is intended to run from some particular volage, like 9 V, 12 V, 24 V, or whatever, but then you don't have just a LED anymore.

It would be useful to know the current requirements of the 5 V circuitry, the 3.3 V circuitry, and the LED. I'm guessing that the sensor probably doesn't take much current. In that case, I'd probably use a linear regulator to make 5 V as you suggest, but a switcher to make the 3.3 V from the 9 V. The sensor runs from 5 V and everything else, including the LED, runs from 3.3 V. That will be a lot more efficient. Assuming this is a normal red, yellow, or green LED, it can be run from 3.3 V easily with the right resistor in series.

Not the answer you're looking for? Browse other questions tagged power-supply digital-logic voltage-regulator or ask your own question.