For a project that I've been working on, I want to drive a couple of ICs and several LEDs from an ~12V supply (lead-acid battery). I think the whole thing should draw about 100mA, so I didn't really want to use a linear regulator: I shouldn't need to dissipate 1.2 watts just to drive a couple of LEDs!

So I designed things with a buck converter based on an MC33063 chip and I've been breadboarding to see how everything works. Unfortunately, what I should have realised before is that I can't avoid discontinuous mode with such low current draw and such a large step down in voltage. Trying 3.3V output, the regulator switches on and off at about 500Hz giving an unpleasant sounding buzz from the inductor and a spectacularly poor output waveform (~1V ripple). I'm using a 50 Ohm load, which should draw about 50mA.

Am I just "Doing It Wrong"? If so, what's the sensible solution I've missed? I guess I could follow the buck regulator with an LDO to filter the power rail, but that's getting a bit ridiculous and won't help with the unpleasant sound from the inductor being switched on and off. Ideas?

There's not much to see, but the buck portion of the circuit is just this: 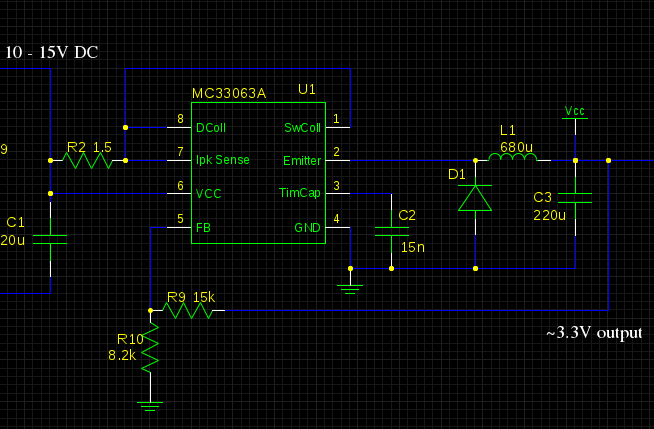 When breadboarding, I've replaced R2 with a dead short because I don't have any low value through-hole resistors, but I shouldn't imagine that makes much difference (since it's a high current cut-out). D1 is an SR104 Schottky.

Basically, your problem is that one impulse of energy through the inductor/capacitor is far more than you need to keep the output voltage "in regulation". You have chosen to short out the current limit resistor but, this is fundamental to controlling the energy per pulse.

Energy per pulse is I^2*L/2 and you have no control on what I limits at. The power delivered to the load is this energy multiplied by the number of times you pulse per second.

Because it is only "doing" 500Hz it certainly is in discontinuous mode and this, given what I've just said, shouldn't surprise you any more. You need to choose a value of current limit resistor that stops too much energy being delivered to the load.

You might also try reducing the value of L to about 100uH as well - this reduces the energy per pulse by a factor of 6.8.

1
Buck Regulator Output is too Small
5
Step down switching regulator heating up with light loads
4
Strange oscillation in buck converter (AP3431)
0
Stepping-down DC voltage (at low current) in the presence of an audio circuit
6
Vin: 2-36, Vout: 4.2. Should I use step-up, followed by step-down, or SEPIC?
1
DC/DC step-down regulator destruction because of inductive load?
0
12v to 1.8v 3.3v 5v
1
Add isolation to a switching power supply
2
Sizing a divider network for a buck regulator