What is killing my MOSFETs

This is my first post here on electronics stackexchange. I am a hobbyits in electronics, and a professional in programming.

I am working on a inductor circuit to heat a workpiece. I have a working setup @12Vac. In short I have the following elements in the circuit: 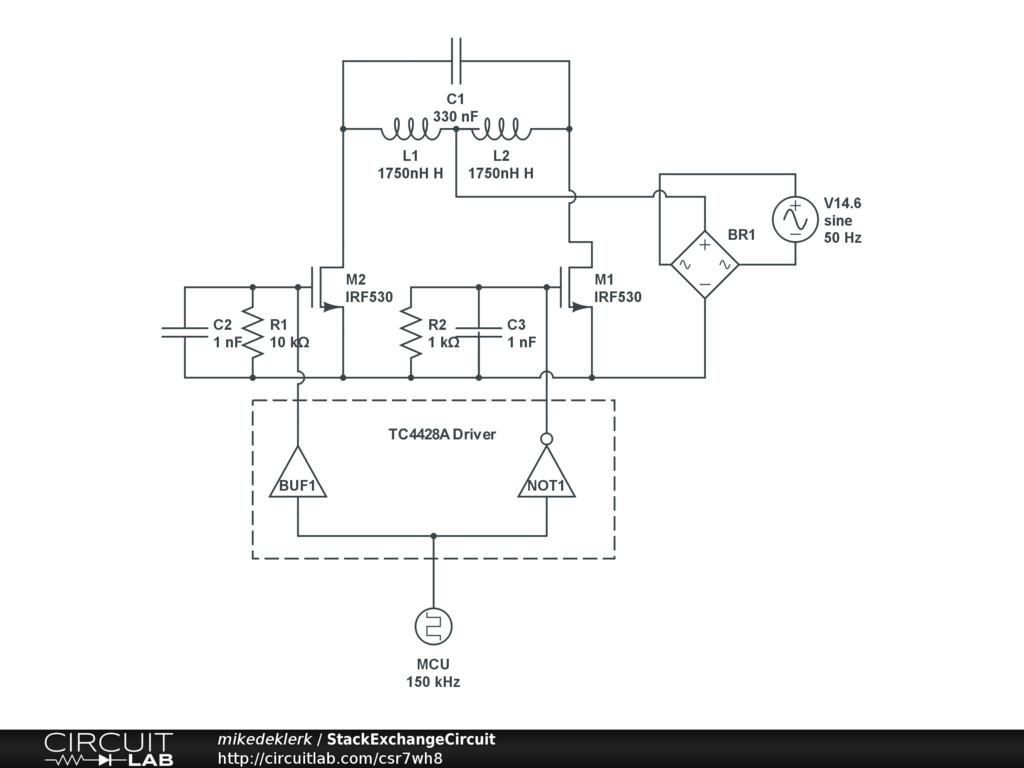 Now the circuit shorts when I want to apply 48Vac to the circuit, by using a welding machine, which the MOSFETs would be able to handle (48Vac = ~68Vdc * 2 = ~~136Vpkpk). Nothing explodes, the MOSFETs are in one piece. But the resistance between the pins of the MOSFETS (Gate,Source,Drain <-> Gate,Source,Drain) are all 0 or very low (<20Ohms). So they broke down.

What caused my MOSFETs to break down? Its hard to examine the circuit when components die.

My equipment exists solely of an osscilloscope and a mutlimeter. 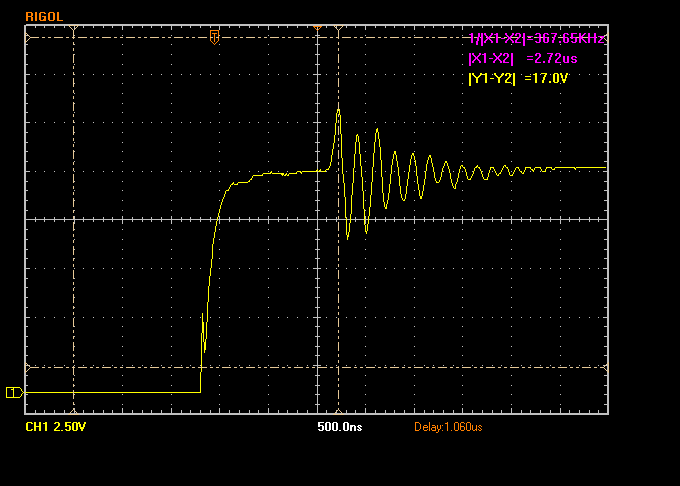 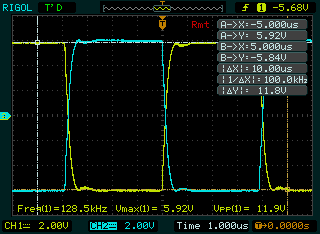 Snubbed ringing on gates with C2 and C3, while solenoid was not powered. Sharing common ground. Looks much better than the first picture. 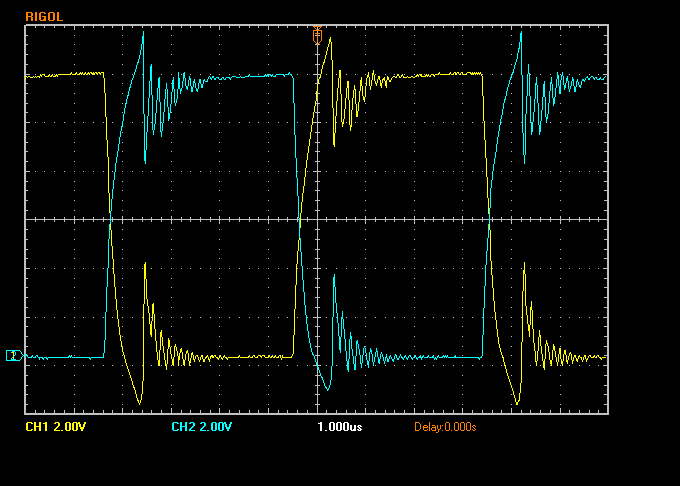 Ringing on Gates while solenoid was powered. Why is the ringing increased when the solenoid is powered on, and how to prevent/mimize it while maintaining switching speed? 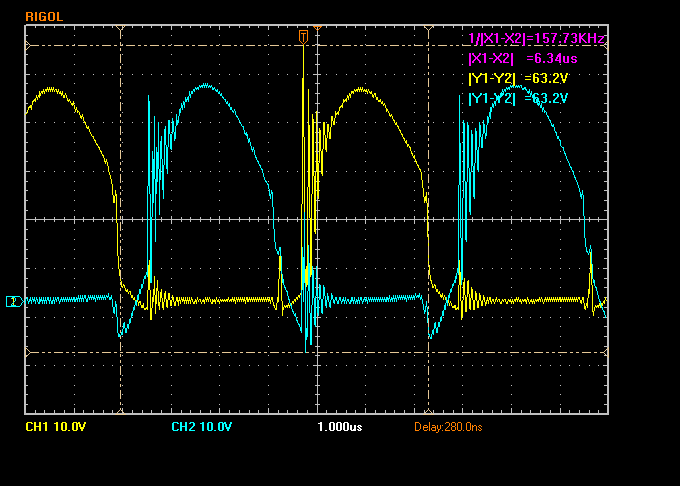 Measurement on Source to Drain with workpiece in solenoid @ ~150Khz. Shown in the last picture, if the signal was clean, it would yield a Vpkpk of ~41 Volt. But due to the spikes it is around ~63 Volts. 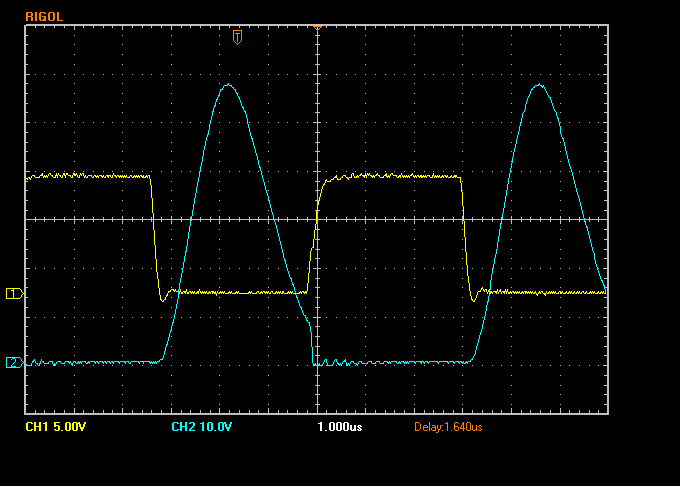 Here I disconnected one MOSFETs gate from the driver. CH1 is the gate, CH2 is the Drain of the MOSFET that was still connected. Now both waves looks fine. No /minimal current was flowing here. When I do connect both MOSFETs to the driver, and measure the resistance between the two Gates, it says 24.2K Ohm. Could it be that if one MOSFET is turned of by the TC4428A driver, that somehow it still picks up a signal from the other MOSFETs Gate when it is turned on by the driver? Is it a meaningful idea to put a diode like so Driver --->|---- Gate to make sure there is no noise? Preferably a diode with low voltage drop of course.

From the driver to the gates, the wires are ~15cm. Does this cause rining?

Almost certainly, and it's a fair bet that this is destroying your MOSFETs, by one or more of these mechanisms:

#3 should be pretty obvious when it occurs, but the other two can be hard to see, since they are transient conditions that may be too brief to be visible on the scope.

C2 and C3 are not decreasing the ringing. You get ringing on the gates because the capacitance of the MOSFET gate (and C2, C3 which add to it) plus the inductance formed by the loop of wire through the driver and the MOSFET gate-source form an LC circuit. The ringing is caused by energy bouncing between this capacitance and inductance.

You should put the driver absolutely as close to the MOSFETS as possible. 1cm is already getting to be too long. Not only does the inductance created by the long trace to the gate cause ringing, but it limits your switching speed, which means more losses in the transistors. This is because the rate of change of current is limited by inductance:

Since \$v\$ is the voltage supplied by the gate driver and you can't make that any bigger, the time it takes to increase the current from nothing to something is limited by the inductance \$L\$. You want the current to be as much as possible, as soon as possible, so that you can switch that transistor fast.

In addition to putting the gate driver close to the MOSFETs, you want to minimize the loop area of the path the current through the gate must take:

The inductance is proportional to the area illustrated.

The inductance limits the switching speed, and it also limits how well the gate driver can hold the MOSFET off. As the drain voltage on the MOSFET that just turned off changes (due to the other MOSFET turning on, and the mutual inductance of the coils), the gate driver must source or sink current as the internal capacitances of the MOSFET charge or discharge. Here's an illustration from International Rectifier - Power MOSFET Basics: 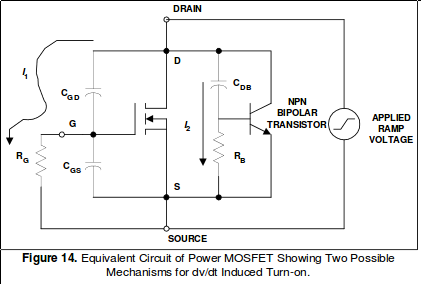 In your case, if the gate traces are long, then \$R_G\$ is also an inductor. Since the inductor limits \$di/dt\$, the gate driver can only respond so quickly to these currents, and then there is significant ringing and overshoot in the resonance between the gate trace inductance and the MOSFET's capacitance. Your C2 and C3 just serve to change the frequency of this resonance.

As the gate voltage is ringing, it sometimes crosses over \$V_{th}\$ of your MOSFETS, and one begins to conduct a little when it should be off. This changes the current and voltage of the connected inductor, which is coupled to the other inductor, which introduces these capacitive currents in the other MOSFET, which can only exacerbate the problem. But, when the coils aren't powered, then the drain voltage is at 0V regardless of the transistor switching, and these capacitive currents (and consequently, the total gate charge that must be moved to switch the transistor) are much less, so you see much less ringing.

This inductance can also be coupled magnetically to other inductances, like your solenoid coils. As the magnetic flux through the loop changes, a voltage is induced (Faraday's law of induction). Minimize the inductance, and you will minimize this voltage.

Get rid of C2 and C3. If you still need to reduce ringing after improving your layout, do that by adding a resistor in series with the gate, between the gate and the gate driver. This will absorb the energy bouncing around which causes the ringing. Of course, it will also limit the gate current, and thus your switching speed, so you don't want this resistance to be any larger than absolutely necessary.

You can also bypass the added resistor with a diode, or with a transistor, to allow for turn-off to be faster than turn-on. So, one of these options (but only if necessary; it's much preferred to simply eliminate the source of the ringing):

Especially in the last case with Q3, you have essentially implemented half of a gate driver, so the same concerns of keeping the trace short and the loop area small apply.

To correctly clamp the voltages on the FET drains to a reasonable value consider this: - 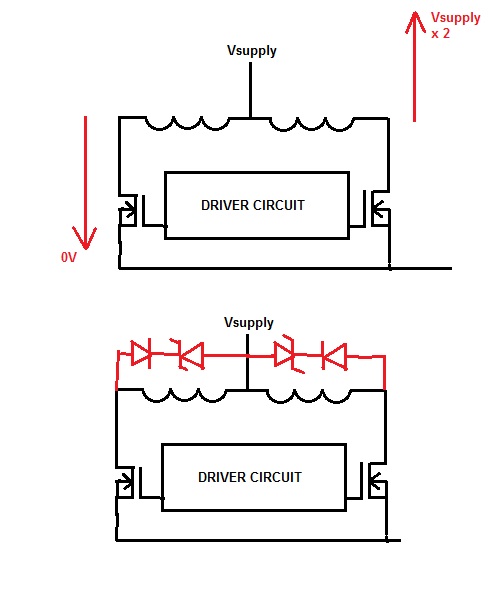 The natural operation of the two coils (if there is any significant magnetic coupling between the two coil halves) is to produce twice the supply voltage on each drain on alternate cycles.

It's like a see-saw with the midpoint (Vs) not moving. Pull one half down and the other rises through transformer action.

This naturally means the FETs have to be rated at least twice the supply voltage or things will fry. Because coupling isn't perfect the zener diodes will catch anything above twice Vsupply.

Recommendations - choose FETs rated at 3 x supply voltage and zener diodes rated at the supply voltage. 5W zener diodes as a minimum too. Get rid of the 330nF capacitor completely - if you think this is going to somehow tune the magnetic filed emitted think again because it just kills the FETs with a current pulse. Maybe 1nF is just about livable-with. Get all connections as short as possible - stray inductance in wires can also be a killer and at the very least give those peculiar gate ringing voltages although, it's likely that these are caused by FET gate drivers with insufficient drive capabilities - in effect the voltage on the drain is coupled back to the gate by internal parasitic capacitance and prevents clean switch-on and switch-off.

Not the answer you're looking for? Browse other questions tagged mosfet heat inductance ringing or ask your own question.

55
MOSFET: Why the drain and source are different?
6
Parallel MOSFETs and Gate Drive Capability
9
Why do my push-pull driver drains ring so much?
2
Mosfet overheating under pwm
4
Push-pull switch mode power supply using an attiny84

6
Parallel MOSFETs and Gate Drive Capability
3
Minimizing Ringing in a H-Bridge
0
Stacked MOSFETs
3
push pull drain severe ringing
2
MOSFET orientation in schematic
2
E.V. Motor Driver (DC). How to protect parallel MOSFETs and the driver?
2
Why does turning a MOSFET ON too fast cause ringing?