How is saltwater able to conduct electric charge between two wires?

Say I put some wires in a container filled with saltwater, but the wires do not touch, and I connect these wires to a battery:

The salt (NaCL) water solution is an electrolyte solution which is, essentially, a conductive solution.

The conductivity of the salt water is due to the presence of both positively and negatively charged ions. These ions in solution are free to accelerate in the presence of an electric field and thus, like the free electrons in a metal conductor, are able to participate in an electric current (not to be confused with an electron current).

While it may seem that the oppositely directed ion currents should cancel they, in fact, add. The flow of negative ions contributes to an electric current in the opposite direction due to the negative sign of their charge.

At the interface between the metal conductor and salt water, there are reactions that either remove electrons or add electrons to the conductors thus completing the path for charge to flow around the circuit.

From the online GenChem Textbook section on Electrolysis: 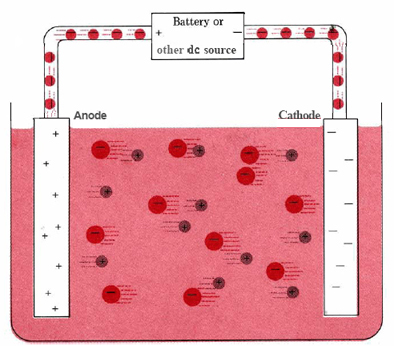 Figure 1 An electrolytic cell. The battery pumps electrons away from the anode (making it positive) and into the cathode (making it negative). The positive anode attracts anions toward it, while the negative cathode attracts cations toward it. Electrical current is carried by electrons in the wire and electrodes, but it is carried by anions and cations moving in opposite directions in the cell itself. Since the anode can accept electrons, oxidation occurs at that electrode. The cathode is an electron donor and can cause reduction to occur.

It is important to note that electric current is simply defined as the flow of electric charge and this definition does not depend on the species of charge carrier.

Pure water consist mostly of H20 molecules. They offer very little option for electrons to pass through the fluid.

Salt water consists (mostly) of H20 molecules, Na+ ions and Cl- ions. When two electrodes are put in such a fluid with some potential difference the Na+ ions will be attracted by the negative electrode and will move (somewhat more) to that electrode. Likewise for the Cl- ions and the positive electrode.

When the voltage (potential difference) is large enough the Cl- ions at the positive electrode will give an electron to the electrode, and recombine to Cl2 molecules (or react with the electrode). You will be able to see and/or smell this. The situation at the negative side is more complex, but at that side the net result will be that the Na+ will help the H20 to get converted to H2 and OH-. You will see bubbles of H2 gas here.

The net effect is that NaCl and water become Cl2 gas and H2 gas. This is a chemical reaction. It is quite different from normal electron conduction:

Without the NaCl a comparable process can take place, using the small amount of H2O molecules that are dissolved into H+ and OH- ions. Because this amount is very very small pure water will conduct much much less than salt water.

In some sense these electrochemical conduction is more like charging a battery than pushing current through a wire. In a wire (or other resistive material) all energy from the electrical current*voltage is converted to heat. With electrochemical conduction some energy goes into the endothermic (= energy consuming) chemical reaction. With a lot of extra work (in this case, oa. capturing the gasses and keeping the close to the electrodes) what you get is a charged battery: it can supply current when you connect its two leads.

So a very brief answer to your question could be: because salt water behaves like a (badly engineered) accu.

Just to add, since none of the other answers have pointed it out, but electricity CAN jump through air. Or even rubber or other insulators, with the right voltage and current. Ever see a spark? A air gap between two wires can be bridged, and it happens accidentally (spark when you plug something into an outlet, when you connect jumper cables to a car, static electricity) or intentionally (car spark plugs, electric lighters, Jacob's Ladders). At a certain voltage/current, normally insulating material like rubber and glass can conduct electricity, at a break down voltage. This is the Dielectric strength of the material. Most things can be made to conduct if you juice them enough. Salt Water is just relatively easier to do.

While it is true that there is some actual physical movement of electrons from atom to atom or molecule to molecule, the bulk of the energy is actually electrons moving to higher states of charge within an atom and in essence the material which the atoms reside within. This is electron vibration.

This energy is transferred to nearby electrons producing the "movement" of current...the electrons in the material move to higher energy states and occupy those shells with energy transferred to anything willing to accept it...a conductor. Salt water, due to its makeup, is an excellent conductor. The speed of physical electron movement is the same in each material with regard to voltage, current and frequency...which normally is only inches per hour.

The observed movement of electrons cannot be used to determine the level of charge contained in the material.

Its all about the bulk resistivity of materials. We make wires out of low-resistivity materials because the job of a wire is to pass current and otherwise get out of the way. Saltwater happens to have a higher resistivity than copper and other "conductors", but still much less than "insulators" like glass and most plastics.

Eventually you get to such high resistivities that it the flow is very small, so small that we call these material "insulators". However, that is just a matter of relative magnitude. Electrons do flow a little in insulators, but the many orders of magnitude between the resistivity of copper and glass allows us to make simplifying assumptions and call one a "conductor" and the other a "insulator".

Not the answer you're looking for? Browse other questions tagged charge conductive water or ask your own question.

26
How to use a capacitive touch screen without a human hand
17
Do electrons actually flow when a voltage is applied?
10
How can a capacitor store charge whilst also passing current?
3
Relationship between charge and electric potential
0
How do capacitors maintain their charge?
11
Would an electric fence be able to detect being bypassed?
1
Non invasive sensor for water measurement in pvc?
0
Do 2 conductors (1 grounded via resistor) reach equipotential, before surplus electrons drain to earth?
1
Why doesn't connecting a positive terminal of a battery to ground cause current?
3
A question about electrons, charges and current