What is the importance of the \$50\Omega\$ resistors in this RF op-amp circuit?

From the TI application note RF and IF amplifiers with op amps: 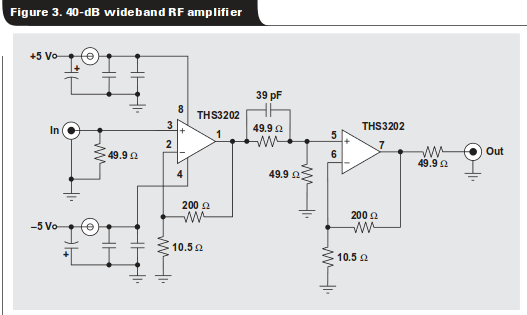 The source says "The 39-pF capacitor provides peaking to compensate for some high-frequency roll-off, but better IP3 performance can be achieved by removing it and living with the roll-off." Let's just consider it left off.

What function do the resistors between the two op-amp stages serve? The choice of \$50\Omega\$ makes me think of transmission lines, but this amplifier has a usable bandwidth up to around 300 MHz, so wavelength is on the order of 1 meter, significantly more than the distance between the stages (it is a dual-op-amp package), so any reflections here would be fast enough to be negligible.

Additionally, the input and the output are each terminated with \$50\Omega\$ resistors. Here's it's reasonable to assume the attached cable is long enough to be considered a transmission line, and these resistors are providing termination for that line. But, why terminate at both ends? Assuming other circuits are doing the same thing, (terminating input and output), won't this serve to cut the voltage in half? This seems to be rather counterproductive for an amplifier; what's the advantage?

You're correct to think in terms of transmission lines . The other thing to realize is that this op amp is a current feedback amp (and not the 'normal' voltage feedback amp).

The 49.9 ohm terminating the first op amp output sets its output impedance to 50 ohm (nominal). The second 49.9 ohm resistor terminates what is in effect a non resonant 50 ohm transmission line and produces a flatly tuned circuit. The result of this termination is to reduce the gain of the first stage by half which looks rather odd but is necessary to maintain the flat tuning of the stage.

Getting back to the 39pf capacitor. It boosts the signal at the high frequency end and compensates for the roll-off in gain but will mis-match the termination leading to some reflection at high frequency.

The circuit is designed to slot straight into a 50 ohm system transmission line system.

My guess is that the circuit doesn't assume that the op-amps are in the same package (despite the pin-numbers) and does assume that PCB traces are 50Ω. The data sheet says :-

A 50-Ω environment is not necessary onboard, and in fact, a higher impedance environment improves distortion as shown in the distortion versus load plots. With a characteristic board trace impedance based on board material and trace dimensions, a matching series resistor into the trace from the output of the THS320x is used as well as a terminating shunt resistor at the input of the destination device.

Not the answer you're looking for? Browse other questions tagged operational-amplifier amplifier rf termination or ask your own question.

8
Why the resistor in this op-amp circuit?
4
Why does the ISDN S0-Bus require terminating resistors?
5
Which Amplifier Should I Use After my DAC (what are I am doing wrong)?
0
Transmission line: Why do longer traces cause signal reflections?
1
What does this op amp circuit do?
2
Differential BJT Class AB amplifier DC analysis
22
Review request: DIY DC to 50MHz differential oscilloscope probe
0
Does the standard termination of 120 ohm really suppress reflections in recessive state in CAN?
2
capacitance at inverting op-amp input of unity gain inverting amplifier