Voltage and current calculations, Resistor and inductor in parallel

Im trying to solve a problem in a book which goes as follows:

A 100mH inductor is connected in paralel with a 2k ohm resistor. The current through the inductor is given by:

a) Whats the voltage across the inductor Vl(t) ?

b) Whats the voltage across the resistor Vr(t)?

That is all the data that is given, it doesnt mention a voltage or current source, so I figured that an inductor in paralel with a resistor in such configuration would be this: 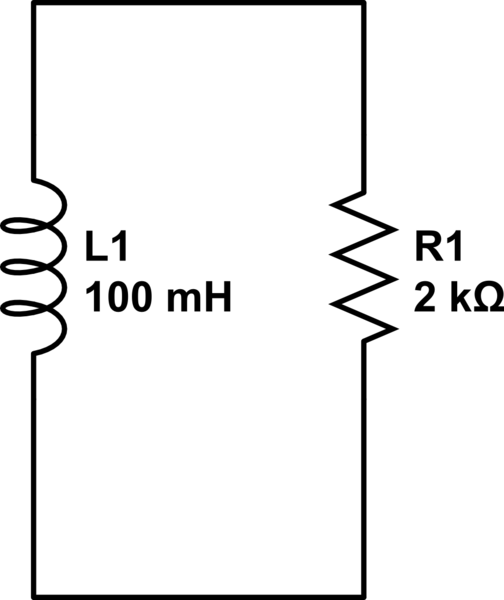 In which case they are actually in series with each other, thus the current of the inductor should be the same current through the resistor.

Now, I calculate the voltage across the inductor:

And the Voltage across the resistor using ohms law:

The problem is that according to Kirchhoff's law, Vl + Vr should be zero, and they are clearly not. However as time goes by, it is true that Vl + Vr will tend to zero due to the exponential function (time (t) approaching infinity).

What troubles me is that Kirchhoffs law is not valid for short values of time, like t=1, or t=2, etc...

What am I doing wrong? what is going on here?

It's simply telling you that the circuit as drawn will never have the given current running through it.

Consider the following situation: Replace the inductor by a capacitor (capacitor discharge might be more familiar to you), and the current function by

Now calculate voltages - they won't add up. Why? Because the current function makes no sense. The complete discharging process of a capacitor through a resistor is completely defined by the capacity, resistance and the voltage across it at time \$t = 0\$.

Similarly, the 'discharging' of an inductor through a resistor is completely determined by the inductance, resistance and the current through it at time \$t = 0\$.

If you are now given a time-dependent current function, you are overspecifying the system. That function may be right, but (like in your question) it may be wrong for the given circuit, so you arrive at contradictory solutions.

Note that there is a way to keep the question/function/values like they are now and make it consistent again, by adding an ideal current source into the circuit which satisfies the given current function. The strange voltage that you couldn't explain is then simply found across this current source:

Let's approach this from first principles.

The voltage across the inductor and resistor are identical and there is just one current i:

The solution to this differential equation is:

But, by your schematic (are the values correct?)

Thus, the given \$i(t) \$ is not a possible solution to the circuit with the values given.

Not the answer you're looking for? Browse other questions tagged resistors inductor or ask your own question.

0
Current always goes to less resistance?
1
Current split between resistor and capacitor in parallel
0
Solving a circuit containing a resistor and inductor in parallel
1
At t=0 the voltage across the Inductor will immediately jump to battery voltage. Why?
1
Average Inductor Voltage equals Zero?
0
What is the value of the opposing voltage created by the inductor?
0
RL circuit and pure inductor
2
MC34063 inductor current peak does not match calculations
0
Constant Voltage Applied to Inductor