I am planning to use a Diodes AP5100 switching regulator to go from ~22V to 12V in my circuit, which will have a max current draw of about 1A. This is my first attempt at laying out a switching power supply and I tried to follow the recommendations (double quoted below) in the datasheet as closely as possible.

"The input capacitor needs to be as close as possible to the IN and GND pins."

"The external feedback resistors should be placed next to the FB pin."

"These interconnecting impedances should be minimized by using wide, short printed circuit traces."

I am not sure if it's a good idea to route R2's ground connection under the IC to ground pin 2? Maybe using a via directly to the ground plane is better?

Also, I am not sure if the ground island for minimizing ground bounce is laid out correctly or is even is necessary. It actually might be makings things worse in terms of EMI.

I think the inductor that I am planning to use might be too small. It's current rating is only 1.6A.

Please offer any advice on how to improve the layout or anything else. 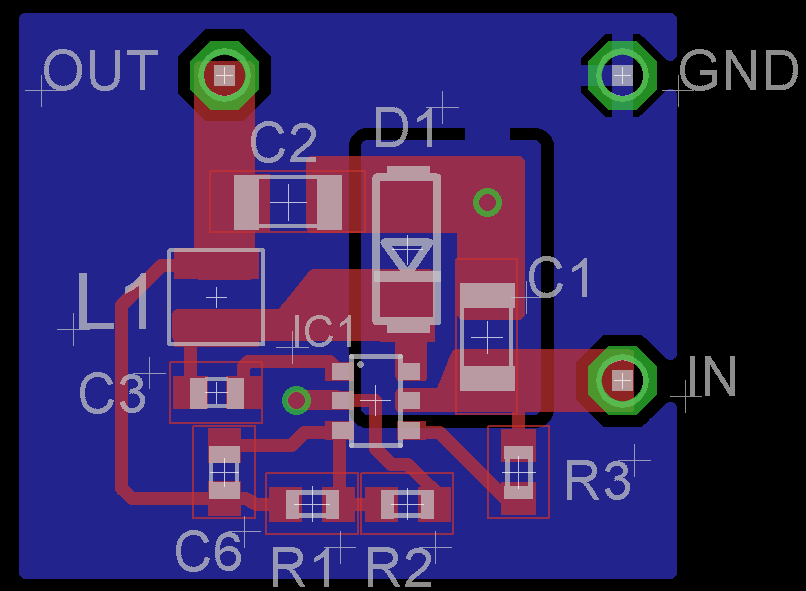 Thanks to everybody for all of the suggestions and I made the following changes: 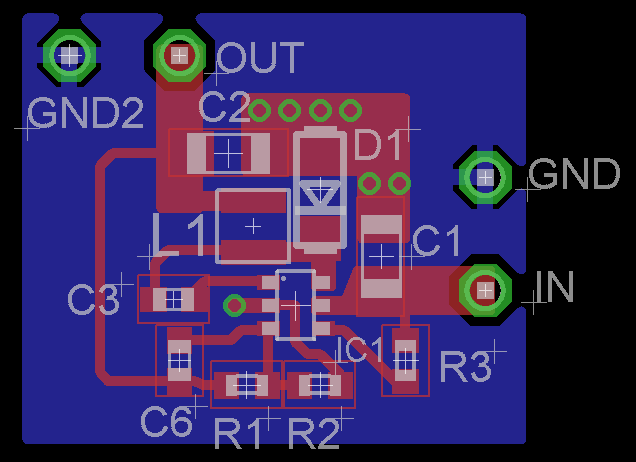 Buck converter has two stages depending on the state of the switch. The switch, in your case, is in the IC and is in between pins 5 and 6. Let's draw the first stage where the switch is ON and D1 is reverse biased. As you can see, the loop is big, because the ground island limits where the current can flow. In order to have a smaller loop, it should have returned right under the yellow trace.

In the other stage, which is not drawn here, things are almost going to be the same, because of the ground island.

Here is a good read on ground bounce. 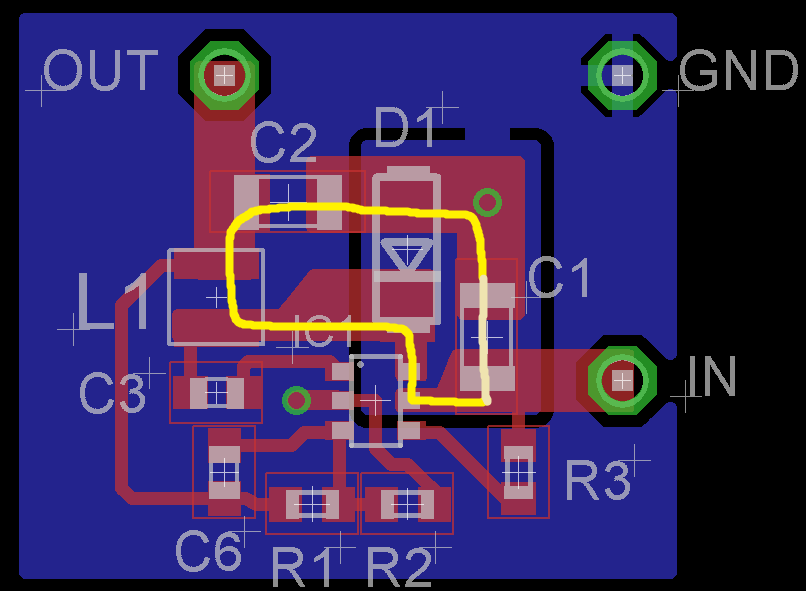 Also, here is a very good read on SMPS layout which includes a section in page 14, about laying out feedback resistors. According to it, instead of connecting C6-R1 junction to L1's pin, connect them to C2's pin. This will reduce the amount of extra current that this track will carry.

Your inductor is fine if it does not saturate at 1.3 A which is stated in the datasheet as below. So, a 1.6 A rated inductor will do fine. Increasing the inductance to 10uH may improve your light load efficiency, but if it brings a higher DC resistance, than you will have lower rated-load efficiency.

Choose the inductor ripple current to be 30% of the maximum load current. The maximum inductor peak current is calculated from:

A 1µH to 10µH inductor with a DC current rating of at least 25% percent higher than the maximum load current is recommended for most applications.

What I would recommend is to remove that island completely and have a solid unbroken ground plane. Also, adding multiple vias right near every grounded pin, for example right near C2's pin on the right side.

One more thing to say is that your input capacitor C1 may not be enough. I once made a buck converter with a TPS5450 chip which also, in the datasheet, recommended a 10 uF input capacitor. After couple of fried chips, it turned out 10uF was not enough. I would recommend adding 2 more footprints so that you can populate a 22uF and a 100nF, later on, if needed.

C1, D1 and C2 carry big currents to ground and, as a priority, MUST make their ground connection right back to pin 2 of this device. No options on this if you want it to work with low ripple. Think of pin 2 a star-point. These ground connections should join at pin 2 ideally and not (for instance) join at some point and have a common track to pin 2.

R2 tracking is correctly routed - straight back to pin 2 on the ground side - do not let this track carry any currents other than R2's.

I wouldn't bother with the ground plane idea you have - just follow what I've said and have a full ground plane.

Not the answer you're looking for? Browse other questions tagged power-supply pcb-design switch-mode-power-supply buck boost or ask your own question.

5
Step down switching regulator heating up with light loads