What does this op amp/transistor circuit do? (revised circuit) 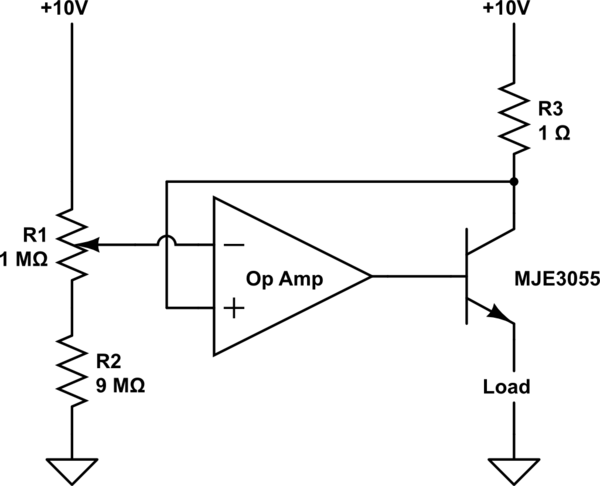 I asked a question yesterday about the circuit above, but my notes showed the op amp terminals mistakenly swapped and the circuit in my original question displayed positive feedback.

After studying it some time, I understand why the circuit no longer displays positive feedback but it's still not clear to me what this circuit does.

It's clear the voltage divider sets the voltage on the - terminal of the op amp to a value between 9V and 10V, but I don't understand how the rest of the circuit responds. In particular, it's not clear to me how the transistor affects the feedback loop and how the second power supply input affects the differential voltage at the op amp inputs.

I'm particularly interested in understanding how much voltage and current the circuit supplies to the load. I'm also interested in how real (ie. non-perfect) op amps might behave differently and the tradeoffs involved in picking the right op amp for this circuit.

Thank you. I'm a beginner and overall very confused by op amps and transistors.

First of all you can control the voltage on the inverting input (-) in the range of 9 to 10V.

If you set the voltage to 10V the voltage difference on the resistor R3 is 0V. Using Ohm's law this yields zero current. This also means there is 0A going through the load.

If you set the voltage to 9V the voltage on the R3 resistor is nor 1V (10V-9V). Using Ohm's law gives 1A. All this current is also going through the load (because opamp's input current is zero).

This way you can control the load current from 0 to 1A.

Assume you set 9.5V with the potentiometer. The voltage on the collector of the transistor is 9.5V. This means R3 voltage is 0.5V and load current is also 0.5A.

Now change the potentiometer to 9.6V. Opamp's inputs are not balanced any more. The inverting input's voltage is higher than the non-inverting input. Therefore opamp will adjust its output by lowering the voltage on the base of the transistor. The collector current will drop and so will the voltage on R3. V(R3) will drop to 0.4V at which point the input voltages will be equal and you will have a steady-state again.

Almost any opamp will work correctly in this circuit. You must consider maximal current opamp can give to the gate. If your output current is max. 1A, the gate current has to be 1A/(transformer beta). You must choose an opamp that will provide at least this much current.

You must also be aware that if you want your circuit to work when the output is shorted the voltage on the output has to go down to GND+0.7V. Even if it does not you can very easily correct it by adding a base resistor.

The circuit is a hypothetical attempt at a constant current feed to the load. Once it is established that (on the face of it) the circuit has negative feedback you can move on and say that the inputs to the op-amp will always be the same (within millivolts).

Because Vin- has a fixed voltage on it determined by the pot all that remains to establish how the voltage on Vin+ is produced. This is simple - that voltage is determined wholly by the current through R3.

The current through R3 is controlled by the voltage from the pot. What about the current through the load? Well, it's virtually the emitter current (R3 current) and so this circuit is an attempt to apply a constant current to the load.

There are restrictions from the power supply of 10V. For instance, if the load were 20 ohms, the circuit power voltage hasn't got enough headroom to put 0.5A through the load and the circuit no longer behaves linearly.

What is wrong with this circuit - if you tried to build it, it would oscillate although the average current into the load may just about be kept at a fixed value. Why would it do this? It will do this because it has made the fatal error of not understanding the open-loop gain of most op-amps.

Most op-amps commercially available sail close to the wind in that with negative feedback they are close to becoming unstable - in fact some op-amps cannot work as a unity gain inverter. What makes this circuit worse - collector gain is potentially added within the feedback loop so now the op-amp has to cope with an extra bit of gain within the negative feedback loop and this, under most practical load conditions will make the circuit oscillate.

If the load is 1 ohm then most op-amps would just about cope with the collector gain being unity but the extra little bit of phase shift incurred makes it on the point of oscillation.

Forget about loads less than 1 ohm and don't really expect this to work in practise - there are better circuits for controlling load current.

Let's do "the math" for this circuit. As others have pointed out, if there is negative feedback, the input terminals have the same voltage:

Where \$v_i \$ is our independent variable, the input voltage determined by the potentiometer setting.

For simplicity, assume that the current through R3 is identical to the load current \$i_L\$. Then we have:

So, this circuit implements a voltage controlled current source (VCCS).

In addition, there are "boundary conditions" that must be met. For example, the maximum voltage that can be applied to the load must be less than 10V. Thus, for loads of about \$10 \Omega \$ or more, your load current range will be reduced.

There are several other considerations that are beyond the scope of this answer.

In particular, it's not clear to me how the transistor affects the feedback loop

This circuit is a current source. The transistor provides an inversion as does the opamp. The net change is positive or no inversion. However, the point of feedback is on the collector of the transistor which means the controlled voltage is at that point. This means whatever voltage is dialed into the potentiometer will be duplicated at the bottom of R3. If the voltage at Vcc and across R3 is guaranteed to be constant, then this is a current source. Of course all this assumes all other parameters are within the dynamic range of the parts involved. For example, it is impossible to drive a constant current into an open load.

I have constructed an used a similar circuit with a power mosfet as the output transistor. In my case I needed a very fast opamp since I was forcing the mosfet into a linear operating mode. I also used the drain of the mosfet as my output and not the source. The circuit actually does work.

Not the answer you're looking for? Browse other questions tagged transistors operational-amplifier bjt or ask your own question.

5
What does this op amp/transistor circuit do?
0
Swinging of Output Current from voltage controlled current source