My book (teach yourself electricity and electronics) talks about the

static forward current transfer ratio ... ratio of collector current v.s. emitter current when we place the base at electrical ground

If the base is at ground, surely the PD between base and emitter can only be zero or the emitter is at a higher potential? (Emitter can't have a potential lower than ground right?). In which case there is a zero or reverse bias at the EB junction so surely no current should flow? I must be misunderstanding something, can anyone show me the light?

Ground is just a point of your chosing to call the 0 reference for other points. Voltages can be negative, especially since the choice of what to call 0 is arbitrary.

Read the book more carfully, and you'll probably see this section was talking about the common base configuration. In that case the base is usually held at a fixed voltage, the input is the current drawn from the emitter, and the output is the collector. Common reasons for using this configuration are:

For example, let's say the gain of the transistor is 50. In this example, the output of the common base (the collector current) is 50 mA. That means the base current is 1 mA and the emitter current (the input) is 51 mA. The current transfer ratio in this example is 50 mA / 51 mA = .98. Like I said, basically 1.

(Emitter can't have a potential lower than ground right?) 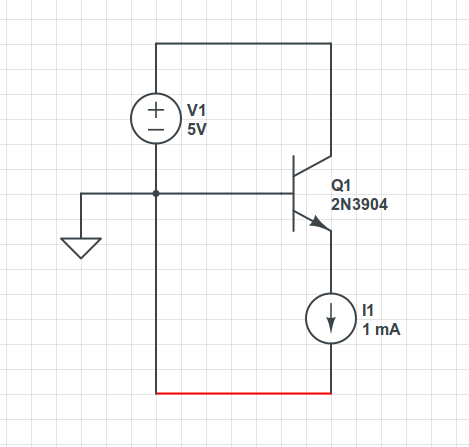 The base is at zero volts. The emitter voltage will be whatever negative voltage it must such that the emitter current is 1mA.

The collector current will be \$I_C = \alpha I_E \$. There will be a slight dependence on the collector-base voltage.

3
In a BJ-Transistor, why do we need to bias the junctions?
5
Why can current flow through the reverse biased base-collector junction (N-P junction) in a BJT with a forward biased base-emitter junction?
2
If the depletion layer of a transistor collector/base junction is thick, why are majority carriers still collected?
4
Transistors why does increasing base current increase collector current?
0
Why is the Collector current of a BJT transistor independent of the Collector Base voltage?
0
Current flow in a BJT transistor
1
Confusion regarding Common-Emitter configuration of a BJT
0
How is the Collector-Base region reverse biased in Common Collector configuration of BJT?