What is oscilloscope trigger "sensitivity"?

I'm learning more about digital oscilloscopes (previously have only worked on analog), and encountered a setting for trigger sensitivity, expressed as a value like 0.30 div.

I'm confused because I thought the trigger level (the horizontal bar which selects the desired amplitude for the trigger) was a yes or no type of event. Either the waveform reaches the level or it doesn't.

The manual for the DSO I am using (a BK 2542B) doesn't explain this setting well at all: "Set the trigger sensitivity by turning the entry knob."

I'm suspicious it applies only to trigger types such as pulse and video, but sensitivity appears in the triggering menu regardless of type.

I too was wanting to know what trigger sensitivity was, and how it related to the trigger level. I found this article which explains it. http://www.rohde-schwarz-scopes.com/_pdf/Benefits_of_RTO_digital_trigger_system-White%20Paper.pdf Basically the trigger sensitivity sets the hysteresis level. In a complex waveform a trigger level may be crossed several times within a cycle of the fundamental frequency, creating multiple triggers within each cycle. Applying a hysteresis ensures that only one trigger occurs for each cycle of the fundamental frequency.

On a digital scope, once the waveform is in the digital realm, bit resolution is quite important. As the bit resolution needs to be no greater than the screen resolution it is convenient to express trigger sensitivities as a fraction of the signal as displayed on the screen.

For example on my Tektronix digital scope, if the waveform displayed is much below 1 division (looks rather like 1cm to me) then it doesn't want to trigger BUT if I raise the sensitivity so instead of 1V/cm it's 0.5V/cm then it does trigger.

The subtlety in this discovery is that I'm altering the sensitivity in the analogue part of the scope which translates to more resolution in the bits for the small signal I'm trying to trigger on.

If the trigger circuit is working in the digital realm, I suspect it needs a certain number of bits to be exceeded when edge triggering and/or pulse triggering. This is to avoid problems with noise causing false triggering. I'm not talking about external noise but internal noise in the scope.

Why does the signal need to be bigger at higher frequencies - I suspect greater noise in the wider bandwidth required at high frequencies has something to do with this "feature".

(Someone with more knowledge, correct me if I'm wrong.)

For me, a picture helps explain this best, so I'm going to use Figure 9 from the article that Brian Plummer mentioned. (Thanks Brian).

In the world of digital oscilloscopes, getting clean triggers is important, so that you trigger on the signal, where you want to, and not on noise. Two trigger settings are meant to do this: 1) the time (horizontal) "holdoff" setting, and 2) the amplitude (vertical) "sensitivity" setting.

Look at Figure 9 below. This is for a rising edge trigger, with the trigger set at amplitude TA, and the blue hysteresis band width, top to bottom, being equal to the "sensitivity" setting. The trigger occurs at the blue vertical line (un-numbered), since the signal rises above TA. Then, at point 2, a 2nd trigger tries to occur, simply due to noise in the ADC (Analog to Digital Converter) of the oscilloscope, but is prevented from occurring since condition 2a, above, is not met. The signal first has to fall below TA - "sensitivity" (ie: to the bottom of the blue horizontal band), before it is eligible for retrigger. Consequently, no triggers occur at 2, 3, or 4, either. The signal has to fall below the bottom of the band, then rise again above TA for another trigger event to occur.

Notice that using the "holdoff" delay setting alone, you could prevent false triggers at points 1 and 2. But what about points 3 and 4? Maybe the period of the signal fluctuates in such a way that you can't safely just increase the "holdoff" setting to eliminate 3 and 4, so instead you choose to increase the "sensitivity" setting, which eliminates false triggers at 1, 2, 3 and 4.

A skillful use of both settings is sometimes required to get exactly what you want. 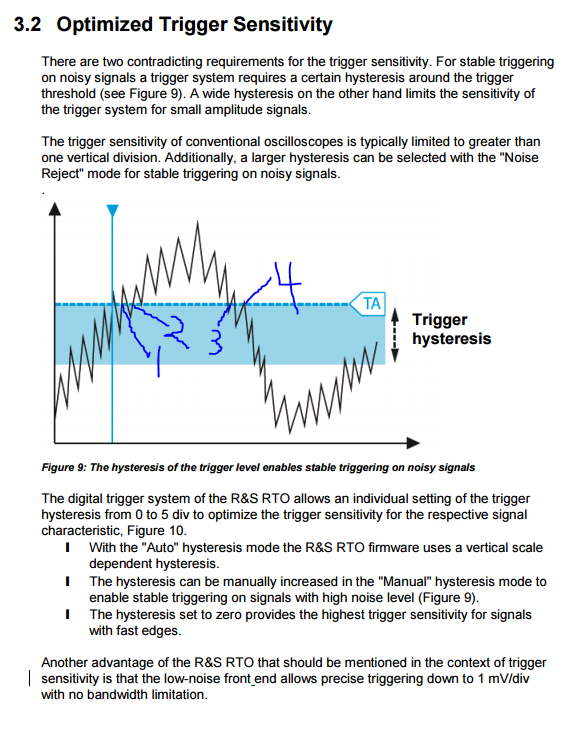