What are the characteristics of a memristor?

This is an in-spirit follow-up to my earlier question.

So I'm an electronics hobbyist, and I've been curious for a while about the proposed new component, the memristor. My research has turned up this link demonstrating the creation of one, and now I'm wondering, how do you define and measure a memristor? If a memristor relates charge and flux, how does an oxidized metal perform like this? finally, do all (or most) metal oxides have these characteristics?

I realize that this is probably a lot, but what I've seen out on the internet regarding this has left me very confused. Thank you for your help.

Then the weber divided by the coulomb is our unit of memristance:

Which, one can see, is identical to the ohm. So, memristance is measured in ohms, just like resistance.

If you don't strip everything to base units, then the equivalence can be more simply expressed:

I find this the most interesting approach, because it can be seen that a memristor integrates both EMF and current (as indicated by the \$\cdot s\$ in the numerator and the denominator). It's as if it's somehow an inductor and a capacitor at the same time, and in doing so, the time terms cancel, and it becomes neither. If you were to remove just one of the \$s\$ terms, then you'd be left with the henry or the farad, but with both you get back to the ohm.

Of course, if \$M\$ in \$\mathrm{d}\phi = M\mathrm{d}q\$ is just a constant, then the time terms really do cancel and you are left with just an ordinary resistor. As Wikipedia puts it:

There is no such thing as a standard memristor. Instead, each device implements a particular function, wherein the integral of voltage determines the integral of current, and vice versa. A linear time-invariant memristor, with a constant value for \$M\$, is simply a conventional resistor.

What makes memristors fancy is that \$M\$ is a function (usually defined as a function of the time integral of current: charge, but could be defined as a function of the time integral of voltage: flux). Because \$M\$ is a function, it allows one to have a device where \$\mathrm{d}v/\mathrm{d}i\$ (usually we'd call that resistance) changes based on what's happened so far: how much current, or how much voltage, there has been in the past. The discrepancy is explained by physical effects I don't really understand, like the arrangement of oxides on microscopic structures, or something. They get rearranged as charge moves through, changing the voltage it will take to move additional charge (resistance).

Inductors and capacitors do this also, but unlike a capacitor, where getting the voltage to \$0V\$ requires bringing the time integral of current, charge, to \$0C\$, and unlike inductors, where getting the current to \$0A\$ requires bring the time integral of voltage, flux, to \$0Wb\$, a memristor can go to \$0A\$ and \$0V\$ without requiring charge or flux to go to zero. Thus, they don't lose their memory of the past when no current or voltage is applied.

That also means if you graph for a memristor voltage on one axis, and current on the other, you don't get a straight line (that would be a resistor), but you do get a hysteresis loop that always passes through the origin, \$0V\$ and \$0A\$. Just where that loop goes at other points depends on the kind of memristor.

You can read more about it on the Wiki 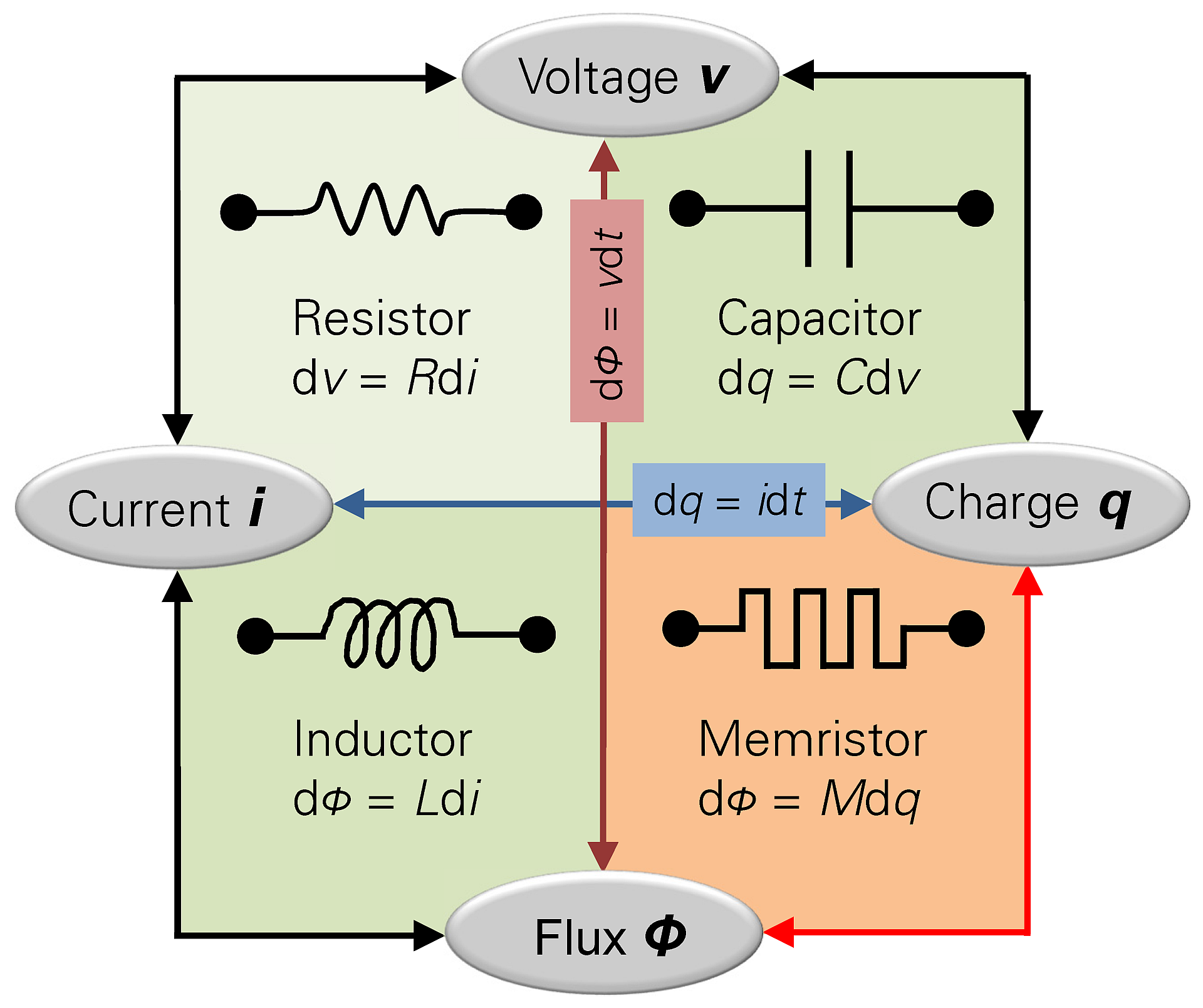 Not the answer you're looking for? Browse other questions tagged components hobbyist memristor or ask your own question.

19
Is anyone producing discrete memristors?
5
What would be a good use for a memristor?

16
How, if at all, can a memristor be emulated with active components?
2
Memristor equations
0
Implementing memristor based chaotic circuit - Muthuswamy
3
Deriving equations for memristor
0
What are the main characteristics of high reactive power RF capacitors?
0
Practical data for HP Labs Memristor
2
Memristor LTspice simulation not matching MATLAB or Python